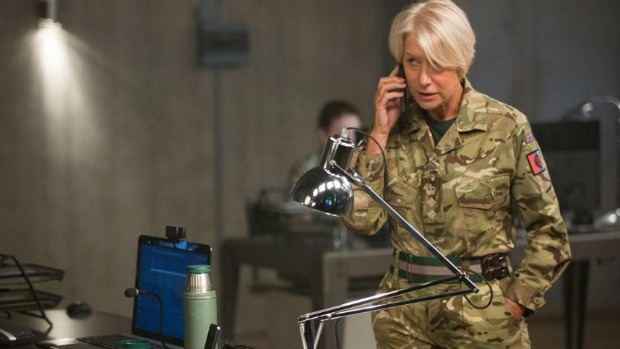 The elaborate, deeply contradictory decision-making process behind the launch of a drone attack on a high-value terrorist target in Kenya is unpacked with escalating tension in this outstanding, absorbing film about the nature of 21st century warfare.

In another example of her latter-life desire to play compelling characters regardless of how unsympathetic they are, Helen Mirren portrays a mission leader whose technologically blessed team of drone pilots, satellite analysts and on-the-ground agents allows her to see her enemy from orbit and from the rafters inside the house. A direct hit could kill these bad guys in one strike and save hundreds of lives.

Problem is: a little girl sells bread in the street just outside the house. Question is: does an attack justify her death?

A battery of arguments, both moral and technical, begin bouncing up and down the decision tree as various formulae are applied to calculate the amount of collateral damage hitting the target in different rooms would cause.

It’s engrossing, nail-biting stuff. Given that this balanced, brutally hard look at the war is one of the best so far, it’s interesting that director Gavin Hood (Tsotsi) was also responsible for Rendition (2007), one of the worst.

The main difference was that while the latter was a leftist slight against America, Eye in the Sky is more willing to examine the nature of war, and that the convenient video gamer stereotype applied to remote-controlled battle is very far from the truth.

While on the slopes of Everest to shoot a documentary about the tourists who come to conquer and the local sherpas who risk all to help them, Sydney director Jennifer Peedom and her crew found themselves in the middle of a clash of cultures causes by an avalanche that killed 16 sherpas.

A prime example of right-time/right-place documentary making, with the stunning mountain vistas providing an apt counterpoint to the bitter arguments that follow.

After 15 years and many failed attempts to escape typecasting, Nia Vardalos returns to the only role anybody seems to care about seeing her in.

It’s more of the same, with the same cast pulling the same faces and the same self-deprecating gags about Greeks and ageing. This time around, Toula (Vardalos) now has a teenage daughter Paris (Elena Kampouris) who wants her own life, forcing Toula to face the issues of maternal smothering and cultural constriction she battled with.

It’s a pleasant enough ride, though to honour the ‘wedding’ part of the title Vardalos has concocted a clunky subplot about the validity of her parents’ marriage, which ends up taking over the film, leaving Paris in the background.

To a wider point, Vardalos is a fascinating case study of somebody who cannot escape being identified with a particular character in a particular context. She’s tried every variation she could on the original formula but none have worked.

To strike while the iron was hot, in 2003 Vardalos developed the sitcom My Big Fat Greek Life, but her character’s name was changed to Nia and John Corbett, who played her beau in the original, wasn’t in the cast. It lasted seven episodes.

In 2009 she starred in My Life in Ruins, which put her in a romantic Greek setting. It flopped. The same year she wrote and directed I Hate Valentine’s Day, a rom-com co-starring Corbett with the apparent hope of reliving the chemistry without having to revive their characters. Again, nobody was interested.

Given the success Vardalos has enjoyed with Greek Wedding 2, it seems Toula has quite a grip on how the public want to see her. What are the chances she’ll make a third.

Set on the sunny, sexy rocks of the Italian Islands, voice-challenged pop singer Marianne (Tilda Swinton) and her loyal boyfriend Paul (Matthias Schoenaerts from Far From the Madding Crowd) have their treasured silence disrupted by the boisterous arrival of Harry (Ralph Fiennes) and his seductive daughter Penelope (Dakota Johnson).

Harry once managed Marianne, his former lover, and he and Paul once were close. Now, under a loosely tied tarp of bonhomie and friendship, they begin picking at each other’s lives, questioning commitments and intentions.

Talented Italian director Luca Guadagnino shows broader, coarser interests here than he did with I Am Love (also starring Swinton, who produced) as he plucks away at the vapourous notions of love, lust and desire.

Fiennes is in especially fine form, stealing many a scene, as when unleashing his impromptu rendition of the Rolling Stones’ Emotional Rescue.