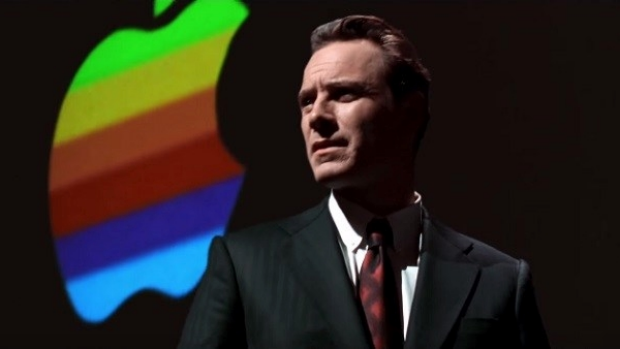 If not intended as a downright takedown of Apple co-founder Steve Jobs, Danny Boyle’s razor-sharp cross-section of his life, mind and working habits is at least aimed at qualifying any claim that Jobs was a genius.

Written by Aaron Sorkin (The Social Network; The West Wing), the film spools though Jobs’ bruised and brilliant psyche via three product launches: the MacIntosh computer (1984); the NeXT cube (1988; and what are the odds the film will be the first most people have heard of it); and the iMac (1998).

Centre-frame for the entire film, Fassbender powerfully projects a cocktail of commercial hubris and emotional insecurity, facing down long-standing issues about his adoption, the never-ending crisis in his company and his chronic inability to give credit to the hard-working minions responsible for his success and wealth.

Though it is a decidedly dark portrait that shimmers into shape before us, Fassbender infuses a comic bounce to his performance that neatly counters his regular outbursts of despotism and bad fatherhood.

And the film drips with irony, the central one being the notion of Jobs as a visionary whose view of the future was clear and pioneering, while his understanding of his present was clouded by contradiction and a Jovian ego that swelled every time he took the stage before his delirious acolytes.

Lovely mulch: Teresa Palmer and Benjamin Walker in the romance The Choice.

More heart-string plucking emotional chowder from author/producer Nicholas Sparks and, as is almost always the case, it’s very carefully over-cooked, designed to extract heartache and hopefully tears from those willing to submit to its seductive mix of attractive cast, beautiful locations, once-in-a-lifetime romance and inevitable tragedy.

The Choice is the 11th adaptation of a novel by Nicholas Sparks, the master of romantic mush who hit big with The Notebook and who also gave us: The Longest Ride; The Best of Me; Safe Haven; The Lucky One; The Last Song; Dear John; Nights in Rodanthe; A Walk to Remember; and Message in a Bottle.

Now, while these films have been easy for lazy critics to dismiss as mulch, it’s important to note both the quality of direction needed to make such mulch work as drama and the disconnect between critical opinion and public taste. (Indeed, the most famous Sparks film, The Notebook, only rates a 52% on Rotten Tomatoes.)

Here director Ross Katz does a fine job keeping the schmaltz on simmer without going too far. The opening half-hour, for instance, clearly conveys the emotional cross-currents between Travis and Gabby without being explicit, and often without dialogue.

The bottom line is that The Choice, produced by Sparks, works. It knows what it is doing and who it is aiming for. Those who aren’t interested in being swept up by romance and having their buttons pushed will know better than to buy a ticket.

Those who are will enjoy themselves immensely.

Very unusual, very satisfying, thought-pricking adult stop-motion animation about a motivational speaker who is guest of honour at a convention in Cincinnati, during which he suffers a major mid-life crisis.

Written and co-directed (with Duke Johnson) by Charlie Kaufman (Adaptation; Being John Malkovich) the film features only three voices: British veteran actor David Thewlis (Naked) is the main character, Michael Stone; Jennifer Jason Leigh (The Hateful Eight) is Lisa, the young woman infatuated with him; and Tom Noonan (the baddie in Last Action Hero) plays every other character.

Notably, this is the first R-rated nominee for a best animated feature Oscar and the first to feature a full-on sex scene that is more convincing and tenderly directed than most. The film’s final dramatic stretch is also extraordinary and daring, and really pushes the film into the realm of an arthouse classic.

Serious lovers of animation won’t forgive themselves if they miss this remarkable, absorbing film.