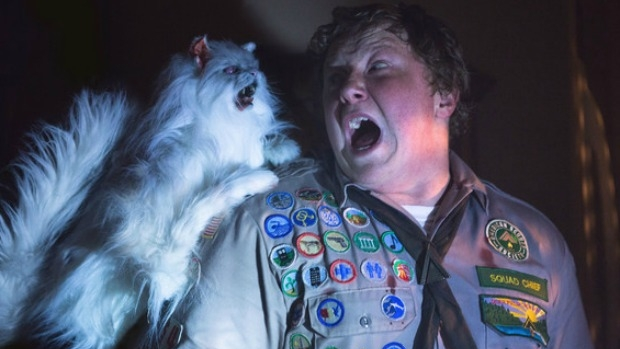 It’s wall-to-wall fun as three scouts discover while on a camping trip that a zombie apocalypse has decided to begin its world-conquering campaign in their small town. Made in the spirit of such horror-comedies as Zombieland (2009) and Shaun of the Dead (2004), this good-natured splatterfest as slow-moving zombies are dispatched in a numer of inventive ways is grounded by a neatly woven story about friendship. It also serves as a sincere, if tongue-in-cheek tribute to the skill set of scouts as the film’s heroes decide that the scouting movement – seen by many as out-dated and square – is not only cool, but savvy enough to save humanity. Written and directed by Christopher B Landon (son of Michael Landon of Bonanza and Little House on the Prairie fame) who wrote 2007’s Disturbia, Paranomal Activity 2,3 and 4, and Paranormal Activity: The Marked Ones, which he also directed. A good, gory time with lots of laughs and digitally assisted dismemberment.

Absolutely outstanding, piercing documentary about the war in Iraq pieced together by Australian war correspondent Michael Ware from the seven years’ worth of camcorder footage he took. Often embedded with US troops, Ware, who worked for Time and CNN, also covered the war from the enemy point-of-view. The combat footage is vivid, with one night-time sequence proving beyond any question just how fearless some American soldiers are. The psychological toll the exposure to war had on Ware comes to bear in the final sequence, where his impartiality as a journalist seems to drain him of humanity. Easily one of the best accounts of the war so far.

Click here to watch our interview with Michael Ware

The ubiquitous Simon Pegg hits another homer as a single guy eager to make the best of his blind date. Thing is, the woman he is supposed to meet is undercut by another lonely heart (Lucy Bell), who steals her spot and spends the day with him. After having a great time, things spin quickly out of control as the deception is inevitably uncovered. With strong performances and zesty direction from Ben Palmer (The Inbetweeners), this is a refreshing British rom-com that happily avoids the cliches we usually get from the American brand. It’s also another comedy that celebrates the humour inherent when we see women behaving badly.

Simple, solid, straight-forward fact-based drama about dying detective Laurel Hester (Julianne Moore) who fights for the right to leave her police pension to her lover (Ellen Page). The citizens-vs-city hall story has a distinct Frank Capra resonance to it, epsecially when a media-savvy gay activist, played superbly by Steve Carell, chimes in with his dial-a-crowd protesters. Just as The Walk was based on the acclaimed doco Man on Wire, Freeheld is essentially a dramatised version of the fine 2007 documentary of the same name. Its director, Cynthia Wade, is one of the film’s producers. It’s somewhat distressing that such battles for equality are still being fought in the 21st century, a point director Peter Sollett makes through his caustic portrayal of local government bureaucracy, which is so dated you can hear its cogs grind in protest against the push for change.

Misfired comedy about a harried, middle-aged matriarch (Robyn Butler) whose already chaotic family life becomes even more so with the arrival of her celebrity niece (Lucy Fry) and her substance-abusing manager/mother (Portia de Rossi). Directed by Wayne Hope, the film is hobbled by too many characters fighting for attention in a tangle of colliding plotlines and a constantly shifting narrative focus. Given the formidable comedy credentials of Hope and screenwriter Butler, who were responsible for the hit TV shows The Librarians and Upper Middle Bogan, it’s a little bewildering that the film feels so haphazard.