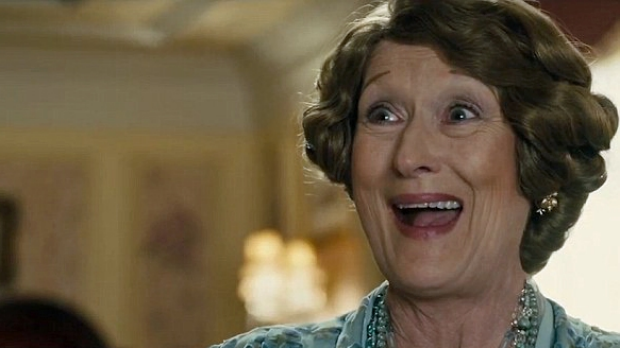 As tempted as we may be to think that the disconnect between fame and talent is something peculiar to our era of reality TV and online goofery, Stephen Frears’ fabulously loopy new film reminds us of the phenomenon’s distinguished heritage.

In what is easily her best performance since 2009’s Hope Springs – despite all those Oscar nominations, you have to skip back over six films – Meryl Streep plays the titular character, a wealthy New York woman who lived a charmed life in the late 19th and early 20th century as a socialite and opera singer. The thing is, she was terrible and talentless – and nobody dared tell her, mainly because of the amusement she unwittingly delivered to the select audiences who attended her small, exclusive parlour performances.

Sumptuously decorated and rife with comically rich performances as people mask their honest reactions to Jenkins when in her presence, Frears draws out a funny, punchy portrait of self-delusion that actually parallels the social patterns that often accompany drug addiction.

While Jenkins basks in a type of fame she does not understand, she is shielded from ridicule by a close circle of enablers who rely on her for their income. Chief among these seasoned spongers are actor and manager St. Clair Bayfield (Hugh Grant, in fine form) and her piano accompanist Cosme McMoon (a solid turn from Simon Helberg, best known as Howard from The Big Bang Theory).

Streep’s delirious capture of Jenkin’s gleeful euphoria is almost perversely captivating and will no doubt earn her yet another knee-jerk Oscar nomination. The chief difference this time around, though, is that she’s so good she actually might merit a win, which would be a fitting irony to her wholesale celebration of mediocrity.

Zac Efron gets it on with the girls in the mild sequel Bad Neighbours 2.

The premise to this quickie sequel to the surprise 2014 comedy hit actually sounds terrific.

In the first film hipster parents Mac and Kelly (played by Seth Rogen and Rose Byrne) faced off with the party-loving fraternity next door, lead by Zac Efron. Here, to shake things up, the fraternity is replaced by a sorority lead by Grace Garcia Moretz.

As the history of comedy has comprehensively proven, misbehaving females are far more fun to watch than misbehaving males, and while there is a smattering of crowd-rousing laughs here, director Nicholas Stoller (Forgetting Sarah Marshall) fails to take full advantage of the opportunity, even with Selena Gomez at his disposal.

What could have – should have – been a knock-out, gross-out comedy is hobbled by all these awkwardly shoe-horned politically correct asides about sexism, gender inequality and friendship. It almost hurts to think of how funny the film could have been had Moretz and her gang been given licence to be the bad girls they clearly wanted to be. Oh, if only this film had been made as if it was 1981!

The trading of raunch for sap is always a tough thing to witness on screen, and when it happens in the final reel of Bad Neighbours 2 we get a real sense of just how lazy American comedies can be.