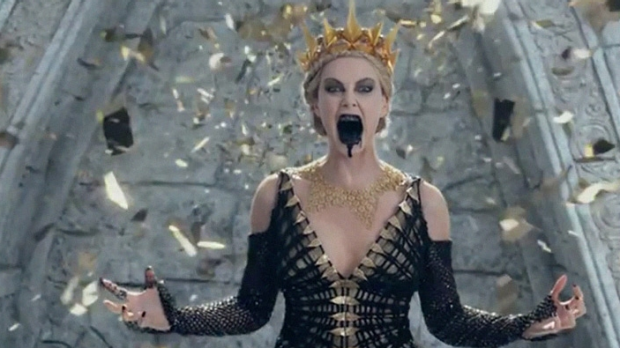 The hunky Chris Hemsworth is back as the Huntsman and Charlize Theron is there again doing that Evil Queen thing she does so well. There’s no sign of Kristen Stewart returning as Snow White, which some would count as a plus. (Cynical sods.) We’ve also got Jessica Chastain on board as a feisty warrior and Emily Blunt as the Evil Queen’s sister.

She has the power to turn things into ice, and given the sisterly tension between the two as one tries claiming the other’s territory, the film could be seen as a bizarro version of Disney’s Frozen.

But Huntsman 2 is basically a good old fantasy adventure, best described as a fairy tale with dirt under the fingernails where the realms of magic spells and enchanted forests mix with the more brute realities of sword fights and monsters.

Director Cedric Nicolas-Troyan did the visual effects for the first film, for which he was Oscar-nominated, and was second unit director on Maleficent. He certainly brings his mastery of digital visuals to bear here, with the sequence where the evil queen morphs from an ooze of liquid gold showing more artistry than anything we saw amidst the clutter of Batman vs Superman.

Behind you, kid: Mowgli (Neel Sethi) gets a wake up call in the latest remake of The Jungle Book.

What a heavy, mordant affair this movie is.

There’s no question director Jon Favreau (Iron Man; Chef; Swingers) has brought his A-game to the look of the latest version of Rudyard Kipling’s The Jungle Book.

The creatures look stunning, with the evil tiger Shere Khan (voiced by Idris Elba) looking more realistic than the one we saw in Life of Pi. Even the big grizzly bear Baloo (Bill Murray) looks like the nicer version of the one we sore tearing away at Leonardo DiCaprio in The Revenant.

Almost every frame of the film is so rich with colour and detail you never once think of wolf-boy Mowgli (Neel Sethi) is performing against a green screen.

Yet the film’s first act is a real plod as Mowgli is sent off to join human civilisation, with the hungry Shere in hot pursuit. It’s not until Baloo turns up that there’s any levity in the film, yet even then it’s at odds with the film’s persistently dark tone.

Animals will suddenly burst out into song for no apparent reason other than to pay homage to the classic soundtrack made famous by the 1967 Disney film.

Trouble is, the film is clearly not a musical, so the numbers stick out like sore thumbs, especially in the clumsy final sequence. It’s a rare and regrettably stumble for Disney, which knows how to mount musical films better than anybody.

The rest of the A-list voice cast include: Ben Kingsley; Lupita Nyong’o; Scarlett Johansson; Christopher Walken; Russell Peters; and, in his final gig, comedy great Garry Shandling, who passed away on 24 March.

Flying the flag: Michael Moore heads to Europe in search of a better America in Where to Invade Next.

You might not have thought you would live this long but the latest documentary from the usually controversial Michael Moore is not only a lot of fun, but quite uplifting. It also shows how, beneath all his bluster and cynicism, Moore has a deep love of country.

More aware than most that America is not as good a place to live as it should be, Moore sets off on a tour of Europe for advice. His quest: to seek out the best ideas and claim them for America.

This takes us on quite an eye-opening journey through such nations as Italy, Germany, Portugal, France, Finland, Iceland and Slovenia (not to be confused with Slovakia) where Moore samples their approach to working conditions, vacations, education, childhood nutrition, tertiary education fees and prisons.

The implicit point that’s made over and over is that these great ideas are all based on the one thing his beloved homeland seems to have lost: common sense.

Moore also discovers that while his plan was the steal these ideas for America, he is repeatedly told that it was America that inspired them in the first place.

It’s the kind of irony Moore loves and that helps lift this doco above the usual agit-prop he is best known for.