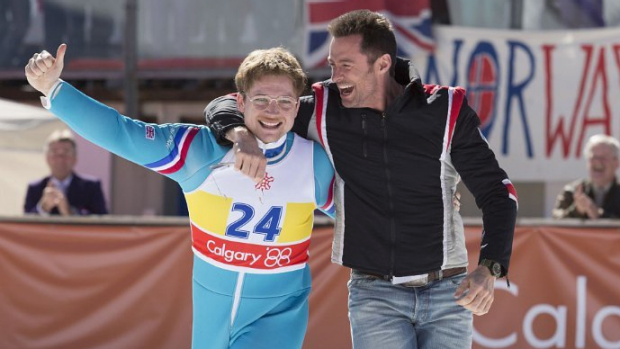 If there’s a Triumph-of-the-Underdog movie cliche that’s missing from Eddie the Eagle it’s probably due to an oversight.

In retelling the true-life story of Eddie Edwards, a suburban loser who in 1988 became Britain’s first ski jump Olympic champion, director Dexter Fletcher (Sunshine on Leith, also an actor best known for Guy Ritchie’s Lock, Stock and Two Smoking Barrels) has spared no heartstring or battle-against-the-odds beat to extract every bit of sentiment from the story.

Cheesy and predictable in the extreme, what matters is that it works, thanks to the can-do attitude of Eddie, played by the usually handsome Taron Egerton (Kingsmen) and quality support from Hugh Jackman as his do-or-die coach.

Inspirational stories like this require obstacles to give the inevitable victory weight, and it’s the good old British pluck in Eddie’s DNA that really sells the film, making it stand out as a true hero narrative in a movie market choking with super-powered comic book ones. It’s little wonder the film has been a hit in the UK & US, and will no doubt be so here.

Seeing all: A child with super-human abilities becomes the subject of a deadly hunt in Midnight Special.

In a clever blending of Close Encounters of the Third Kind, Starman, ET and The Day the Earth Stood Still, a child with special powers called Alton (Jaeden Lieberher) becomes the subject of a desperate, deadly hunt when he and his father Roy (Michael Shannon) escape from a cult.

The thing about this band of believers, headed by a cool, determined minister (Sam Shepard), is that their gospel and teachings are based on Alton’s other-worldly utterances.

As derivative as the film’s chief themes are, writer/director Jeff Nichols (Take Shelter) weaves the piece together with a deft balance of tension and wonderment. Plus, he does deliver a visually awesome finale that shows a deep love for Steven Spielberg.

Also in the cast are Joel Edgerton (who seems to be everywhere these days), Kirsten Dunst and Adam Driver.

Can I help you?: John Brumpton is part of the impressive ensemble in the independent film Pawno.

Adopting the reliable day-in-the-life format, writer Damian Hill and director Paul Ireland take us into the Melbourne western suburb of Footscray, where a pawn shop run by a gruff proprieter (John Brumpton) and his love-starved assistant (Hill) form the centre of the discursive film.

A string of vignettes connects around a dozen characters in a dramatically pleasing mosaic, sometimes funny, sometimes sad, sometimes not as well-developed or rounded as it could have been.

Check out our special interview with Mark Coles Smith.