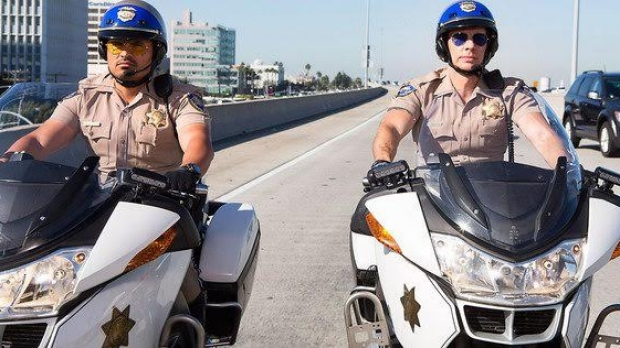 Urgh. Whoever put the elephant stamp on this wretched remake of the fondly regarded family series should be forced to watch it. The series (1977-83) was a fun, light-spirited affair about two motorcycle cops of the California Highway Patrol (Larry Wilcox and Erik Estrada), the mixing of a white guy with a Latino giving the show a congenially progressive core. The film, written and directed by comic actor Dax Shepard, is a distinctly adult comedy full of swearing, killing, dismemberment and references to homophobia (a running gag). Shepard plays the doofus white cop riding with Latino partner Michael Pena. Scenes of them riding features some neat POV camera shots, but the film is light on laughs, its signature scene involving the face of one guy going into the naked groin of the other. A very unsatisfying entry into the whole TV-to-film sub-genre.

Fans of the internationally successful ABC TV series will have their bells repeatedly rung as director Jeffrey Walker (who worked on the series) and co-creator/writer Samantha Strauss present a high-gloss, internationalised take of this gaggle of young ballet dancers. The basic story involves Tara Webster (Xenia Goodwin), an injured dancer who gives up a potentially lucrative lawsuit to rejoin the realm of ballet. Her trip to New York to be with her friend presents us with the film’s most interesting character, Kat (Alicia Banit), who has become a big TV success, though at the cost of her artistic integrity. This clash between the higher principles of ballet and the perks of celebrity is the best things in the film, but it’s too quickly sidelined for a much less involving tale involving illness. Much of the original cast have returned, Walker did eight episodes of the show and Strauss did the screenplay, so fans of the show will feel dutifully well-served. Those coming to the film cold might feel a little iced out.

The culture-changing odyssey of Hugh Hefner and Playboy magazine is detailed in this absorbing, semi-dramatised 10-part documentary that takes us from the pre-history of the magazine when it was called Stag Party to its latter-day fight for survival. Combining scripted scenes with archival interviews and a plethora of footage – the show was endorsed by the Playboy people – the first two episodes follow Hefner’s desire to fill the void left by changes to Esquire with a magazine designed to culturally enlighten its male readers and celebrate the female form. The pop-cultural apotheosis that saw Marilyn Monroe appear as the first centrefold is relayed here in blunt terms, whereby Hefner had to bargain for the rights to calendar photos of her. All signs point to an intriguing series, with New Zealand actor Matt Whelan doing a terrific job as Hef.