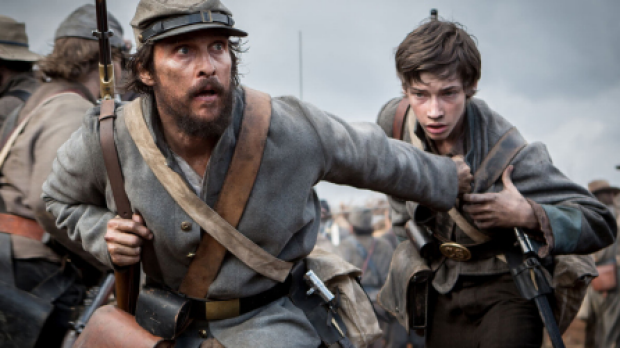 A very grizzled and gaunt Matthew McConaughey shines through the mud and swamps of the Civil War South as a renegade militia leader who presides over a breakaway faction of the Confederate forces dedicated to protecting their families and newly emancipated slaves. Writer/director Gary Ross (Hunger Games; Seabiscuit) has a well-honed talent for staging set-pieces of epic sweep – the battle scenes are brutal – but it’s in the quieter moments where his strengths truly show, as when a fatherless family is forced to defend their home against extortionist soldiers. A must for Civil War buffs, Free State of Jones is a ripping fictionalised drama about true events long hidden from history’s spotlight.

Given the depth of affection for the 1959 version of Ben Hur starring Charlton Heston it’s no surprise that this lean and mean, trimmed-down 21st century take has been greeted with a wall of cynicism. There was, of course, no way that wizz-bang director Timur Bekmambetov (Night Watch; Abraham Lincoln – Vampie Hunter) could match the grandeur, scale and sheer bombast of William Wyler’s four-hour opus (including intermission), but he has used technology to improve on the classic chariot race and naval battle sequences, with small digital cameras allowing far more vivid images than were possible with the hulking fridge-sized contraptions of the olden days. As for Jesus Christ, He actually gets a bit of a look in this time around. And this film, which is at least sprightly entertaining, certainly comes as something of a relief after the plodding pretention of Exodus and Noah.

(Check out our interview with producer Roma Downey)

Though widely regarded as a classic of the sitcom form, The Office does tend to divide people, with one camp hailing it as a masterpiece of British character comedy while the other considers it largely laughless. Here, Ricky Gevais – who co-created the show with Stephen Merchant, who had nothing to do with this film – loyally serves Office fans as he shows David Brent 15 years on. Taking a holiday from his job as a sales rep to ‘tour’ his band Foregone Conclusion, Gervais excels at his signature comedy schtick of awkwardness and delusion. Fans of Brent will love his  cringeworthy attempts at performing politcally correct songs such as Equality Street and (believe this if you dare) Please Don’t Make Fun of the Disableds, along with his trademark bumbling and half-sentences. As for his dealings with women, the impression that David Brent is a virgin is far stronger than the hints we got in the series. So there’s plenty for fans to chew over and enjoy. Non-fans should steer well clear.

Very effective, taut beach-borne thriller in which a lone surfer (Blake Lively) finds herself stranded between the beach and a large, hungry shark. Lively is terrific, tempering her panic with the need to think straight. But the over-sized shark is the real star, behaving much like the angry grandchild of Bruce from Jaws. And to borrow the slugline from Jaws 4, this shark really does get personal.

Gen-Y A-listers Jonah Hill and Miles Teller spark off each other marvellously in a rhapsodic mashing of The Wolf of Wall Street and The Big Short. The pair play high school chums who reunite to run guns for the Pentagon without worrying too much about the morality behind their unashamed profiteering. Like Jay Roach (Meet the Parents; Trumbo) and Adam McKay (Anchorman; The Big Short), director Todd Phillips (Old School; Due Date; The Hangovers), has used his comedy skills to move into more dramatic, meaty territory. Fans of this film should revisit the underrated 2005 Nicholas Cage film Lord of War, which paints a similar portrait of the dubious glories of war-mongering.

Young Australian writer/director Luke Sparke has done a very fine job adapting the conventions of the creature feature to an Australian setting in which a bunch of young Aussie archetypes in a remote house in the bush encounter a large, hard-to-see beast that likes eating people.

It’s a very well-made, well-directed film that will satisfy fans of the genre, with the final reel providing a nice pay-off.

But here’s the problem.

In normal circumstances – and certainly if this was an American film – Red Billabong would have pleased horror fans for a few solid weekends before heading off for a lovely afterlife as a Friday night favourite on stream or DVD. But guess what? That’s not going to happen. It’s going to die a silent death because nobody knows it’s out there.

To repeat the point made with Down Under, the problem afflicting too many good Australian films right now is an apparent lack of marketing savvy. With virtually no public profile or awareness how can people be expected to care about going to see Australian films, especially well-made ones designed for big audiences?

Despite its topicality and virtues, Down Under has died. Spend a depressing five minutes online checking out the few places where it’s screening. Never mind it being ‘controversial’ or a ‘must see’. Never mind the director’s noble hopes that it would be part of the public conversation about racism. The film’s impact has been zero, thanks largely to its lack of profile. It doesn’t even have a Wikipedia page! As for that title – could there not have been something catchier, more incendiary to prick the ears? Maybe with the word ‘Cronulla’ in it?

As for Red Billabong, fingers are crossed that this fun genre film finds life. It deserves one. What it doesn’t deserve is to sink without trace into that swamp of obscurity already cluttered with good recent Aussie films.

The sorry situation reflects one of the ironies of local film culture: we have great marketeers and world-class ad agencies. We have terrific filmmakers turning out good films that audiences would likely enjoy if they knew about them. So why the disconnect?

The answer is too obvious. Releasing a film without a campaign designed to cut through to the public is a largely wasted exercise. Allocate resources, do what the Americans do, sell the damned thing and let cultural cringe be forever damned.

This allegorical arthouse fluff about the British class system might well have been a punch-in-the-guts piece of social commentary when JG Ballard published it in 1975. As adapted here by rising British talent Ben Wheatley (Sightseers; Kill List) and screenwriter Amy Jump the piece is a slickly made, slick-looking style piece with Tom Hiddleston as a tenant in a new high-rise development, which serves as the film’s allegorical centrepiece. War breaks out between the floors and it’s staged with all due gravity but the synthetic feel of the piece becomes more and more prominent the more things deteriorate.

As a 1950s private school boy Logan Lerman (Percy Jackson) does a splendid job in this dialogue-driven rites-of-passage drama that canvasses the secret euphoria of major league sexual awakening (i.e: the type that involves the active participation of another person) and the challenge of facing down authority. In a neat acting turn, Tracy Letts (who wrote August: Osange County) makes a terrific case as the conservative but caring college Dean. First-time director James Schamus, best known as a writer (Crouching Tiger Hidden Dragon, Eat Drink Man Woman, The Ice Storm, Hulk, Brokeback Mountain and Taking Woodstock) proves himself a lover of close-ups and great dialogue.

The latest high-class effort from the impressive independent Laika animation studio (Boxtrolls; Paranorman; Coraline) looks beautiful as it deploys a combination of stop-motion and digital animation to tell a Japanese folk tale about a boy on a fantasy adventure. But, man, is it gloomy. Themes of dead fathers, vengeful ghosts and eye-gouging, all set against forbodeing set design make for yet another piece of children’s entertainment that comes across as too deep and too dark and not really all that much fun.