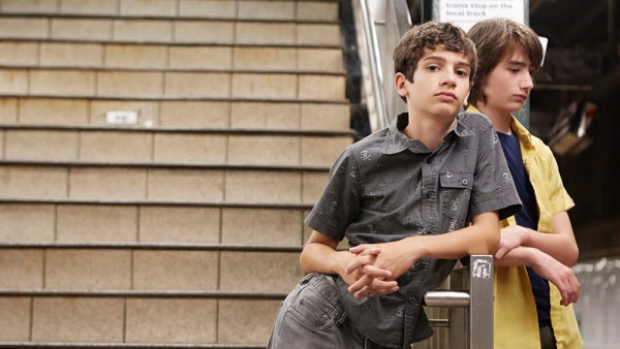 Finely etched domestic drama from New York writer/director Ira Sachs (Married Life; Love is Strange). A struggling actor (Greg Kinnear) and his successful wife (Jennifer Ehle) inherit a property containing a dress shop run by an old family friend (Paulina Garcia). During an initial burst of warmth and bonhomie between the adults, the teenage sons from each side (Theo Taplitz & Michael Barbieri) form a bond based on their mutual love of the arts. Tensions rise when the street’s gentrification triggers the issue of the lease and, possibly, of eviction. As with Love is Strange, Sachs shows his love of little moments, nuanced behaviour and unforced, if occasionally forceful, performances, with the turns from the lads oozing with naturalism. One could argue the film could have benefitted from a stronger third act, though the ambiguity of the ending is a clearly deliberate nod to the realities of childhood friendships and how they fare in a world where adults have their own ideas about how boys should behave.

A sloppy, stupid, largely unfunny mess of a comedy. In what feels like a Horrible Bosses spin-off, Jennifer Aniston plays a sexy corporate tyrant who tells the heads of the faltering Chicago branch of her tech empire, run by her dope-loving brother (TJ Miller), that huge cuts are needed. He and colleagues Jason Bateman and Olivia Munn then try saving the place by impressing a prospective client (Courtney B Vance) with their raucous, unauthorised Christmas bash.

Apart from some early improv comedy, almost nothing in this lamer-than-lame dollop of computer-written crud works.  And a warning: When Bateman hits a career low by performing an indecent act on an ice sculpture you might just throw up a little.

Director Lee Tamahori teams up with his Once Were Warriors leading man Temuera Morrison for a solid, intense drama about family feud and a domineering dad.

Set in 1960, Morrison heads a large, extended family that he runs with an iron fist, chiefly so he can maintain an edge over a rival family with whom he is in constant competition over sheep-shearing contracts.

Naturally, and in the best Shakespearean tradition, one of his sons falls heavily for one of the daughters of his dad’s enemy.

Based on the book by Witi Ihimaera (Whale Rider), Tamahori also wrote the screenplay and clearly relishes his return to smaller films after his Hollywood ventures, which included Mulholland Falls, Along Came a Spider and the Bond film Die Another Day.

Check out our interview with Lee Tamahori.

In fairness, it need be noted that David Parker, in partnership with his director/wife Nadia Tass, has given us some golden films over the years: Malcolm; Amy; The Big Steal; Matching Jack. Regrettably this attempt at social satire, with Parker at the helm (his first since Diana and Me), is a fizzer. Bearing an overripe Russian accent, Noah Taylor (still bearing his Game of Thrones mutton chops) plays a shifty workplace makeover artist who promises an executive at a failing bank that he can lift productivity by using a few unorthodox methods, namely drugs. Despite nice turns by Catherine McClements and Jessica Clarke, the subdued direction doesn’t gel with the story’s over-the-top elements, so when machine guns start going off it feels like a different film has kicked in.

Mainstream comedy fixture Jason Bateman proves his directing chops presiding over the distinctly non-mainstream, darkly comic story about a dysfunctional family borne from performance artists. As adults, Bateman plays a struggling writer opposite sister Nicole Kidman, an expiring actress caught up in a mystery involving their defiantly oddball parents (Christopher Walken and Maryann Plunkett). Once stunt-loving actors who loved performing pranks and secretly filming them on video, YouTube style, they have found, in the age of YouTube, that decent reactions are now difficult to provoke. A finely honed look into the life, and after-life, of a self-marginalised family of media freaks, the film serves as a prime example of how true originality and challenging ideas in film chiefly exist on the arthouse circuit.