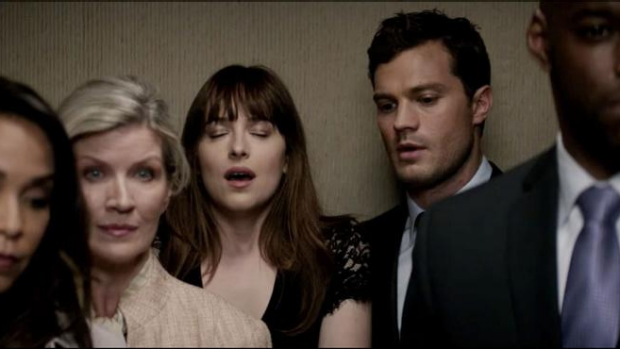 FIFTY SHADES DARKER *** (118 minutes) MA
Those who derived a decent amount of indecent titillation from the runaway 2015 hit Fifty Shades of Grey will be pleased to know that they’re likely to enjoy the polite perversions of Fifty Shades Darker even more.

Part of that is because of the added spice anticipation gives to the film’s nicely photographed scenes of transgressive sexual behaviour, but mainly it’s because it’s just a better film. It moves faster, there’s more plot and, most of all, the labourious setting up was all done in the first film, so now we don’t have to waste any time getting straight to the nookie.

And, let’s be honest, that’s all people want to know. The films are good because they are smart enough to honour the trashy heart of the best-selling books by E.L. James, offering some low-flying romantic escapism and the allure of sexual danger, though all within the comforting confines of a consent-based relationship.

Anastasia (Dakota Johnson) is back, on her own, trying to live her single life as an assistant in a successful publishing house. Then, of course, Christian (Jamie Dornan) turns up.

The poor sap is even deeper in love with her than he was before and is now willing to do anything to get her back (apart from shaving, it seems). So Anastasia sets down some rules for their new verbal contract that should steer their relationship into more normal territory. He agrees desperately.

Oddly, the new agreement still allows Christian to do his slap-and-tickle routines on Anastasia. Heck, he doesn’t even dismantle his plush equipment room and she never demands it, even though she says she’s not into that stuff no more.

So what’s going on? It’s nothing too deep, it’s just a matter of control. The little acts of defiance Anastasia is so good at serve to hide her deeper desire to indulge in all of Christian’s naughtiness, the big message being that she wants the freedom to say that she wants to be tied up and spanked. And, as with the previous film, Christian really needs her consent before he can do anything to her.

Now, you are not going to read here about how all of this squares with modern feminism – or what’s left of it. The film’s theme of consent does give it a good defense against any of the usual charges – what are they again? Oh yeah: misogyny; sexism; objectification, etc etc – still, here’s hoping the film does trigger some sensitive souls over some hot-button issue or other.

But overall Fifty Shades Darker is harmless entertainment. It’s a well-made sex melodrama designed for the mommy-porn loving masses. It’s like a soap opera with bondage, or Mills & Boon with whips and handcuffs. A fun bit of titillation, it offers soft-centred transgression for supermarket shoppers, polite perversion for the multiplex.

The only real complaint about the film regards Dakota Johnson. She is pretty and all, and puts in a good perfomance, but what has happened to her feet?

We’re in the restaurant scene where she’s taking her panties off, the camera follows them down her legs to what look like the feet of a barefoot rock climber. Urgh! They look like they’ve got more crevasses than the surface of Mars.

Hopefully they’ll attend to that detail when the big finale comes this time next year with the big wedding movie. So be mindful not to leave the film early, lest you miss the preview.

An initial air of bonhomie and working-class contentment soon give way to a more fiery reflection on the disappointments and personal failings that keep their lives from ever being truly happy.

Based on the Tony & Pulitzer-prize winning play from the mid-1980s by August Wilson (who is also credited with the film’s screenplay, which he finished shortly before he died in 2005), Fences is a prime example of a classic stage work that fails the jump to the cinema screen.

In his third outing as director – he did Antwone Fisher (2002) and the vastly underrated gem The Great Debaters (2007) – Washington kicks off with some impressively cinematic master shots as the garbage truck trundles through the industrial backstreets before bedding the film down in the small, cluttered  backyard of Troy’s house.

Having played the roles on stage in 2010, Washington and Davis deliver vibrant performances of intermittent power, with Davis’ portrayal of the shackled housewife  likely to secure her this year’s Best Actress Oscar.

But you’d need to be a better director than Washington to keep a two-hour plus film that sits in one main location afloat. Occasionally the action moves to the streets or inside the house, but Washington mainly confines things to the backyard, clearly uninterested in expanding on the work’s stage origins.

One wonders whether the spirit of August Wilson would really have minded so much if Washington or noted screenwriter Tony Kushner (Munich; Angels in America; Lincoln) had refined and punched up a lot of the work’s repetitive dialogue.

Again showing his love for playing damaged characters, Washington deserves kudos for pulling off some explosive emotional moments as an actor and a director, especially those involving his son Cory (Jovan Adepo).

Yet the inordinate length of the piece and the constantly descending tone of the drama results in an ultimately heavy, draining experience from a director who should have been braver in breaking out of the constraints of its stage origins.

Perfectly sweet mushball of a movie about a young penniless, homeless junkie busker James Bowen (Luke Treadaway) whose life is turned around when a street cat enters his life via the window of an emergency flat he’s just been given.

Based on a true story – the real Bob stars in the film – veteran British director Roger Spottiswoode (Tomorrow Never Dies; Turner & Hooch; And the Band Played On; Mesmer) doesn’t push the cute factor beyond endurance and punches through some points about some of the harsher realities of poverty in modern Britain.

It’s also worth noting how rare it is seeing a cat as the star of a film, given how dogs have largely cornered the movie market.

THE MAN IN THE HIGH CASTLE

An intriguing, glossily produced longform adaptation of the 1962 novel by Philip K Dick, The Man in the High Castle posits an alternate version of the world in which Japan and Germany triumphed over the Allies in World War 2.

Set in 1962, with swastikas and modified Nazi uniforms all over the place – the costume and set designers clearly had a field day working on this show – America is unevenly divided, with Japan on the left side, the Nazis on the right and the Rocky Mountains acting as a neutral zone down the middle.

The very well-staged action chiefly involves the acquisition of these strange propaganda films that suggest the Allies won the war after all, which adds a nice Twilight Zone edge to the proceedings.

Of all the officials and double agents running about, the most interesting character – as you’d expect – is a Nazi, here delivered with relish by Rufus Sewell. He plays American-born John Smith who is charged with smashing the resistance and recovering these dangerous films.

Played straight as a regulation Nazi salute, the drama makes for unsettling entertainment, with the first episode of season two playing on the real fear people had during World War 2 about the Axis powers getting their mitts on nuclear weapons.

The Man in the High Castle is a snappy piece of speculative fiction, with the ageing, frail figure of Adolf Hitler at the centre of it all, his greying portrait still hanging in high school classrooms where slavery is celebrated.

Those hungry for an alternative to Lena Dunham’s Girls will find plenty of dark relationship humour in this very funny BBC3 comedy by writer/star Phoebe Waller-Bridge (she’s in the Han Solo Star Wars film).

Hopeless at maintaining relationships and with a self-sabotaging instinct that can sap the joy out of any pleasant sexual encounter, she addresses the camera directly as she flits through London dealing with her dead-end job, her dad, her step-mother, her sister, men and her total failure as a feminist.

Full of acidic one-liners and R-rated moments – she likes Barack Obama a lot – Fleabag (that’s the character’s name) might be full of self loathing but she is very easy to like.