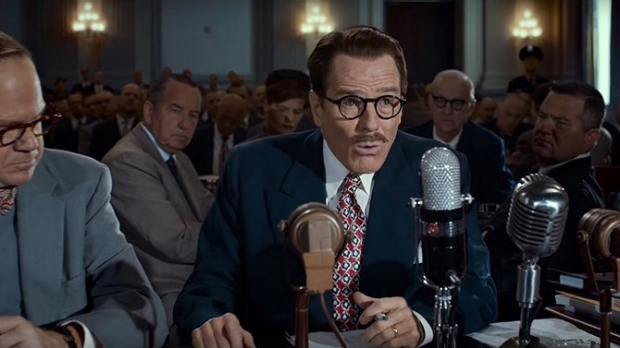 Absolutely sterling, compelling drama about the notorious Hollywood blacklist of the 1940s and ’50s that saw thousands of creative careers destroyed as Washington went on a rabid, nation-wide hunt for Communists.

It’s through his furrowed, bespectacled eyes that we see the whole catastrophe unfold as people are forced to appear before the infamous HUAC (House Committee on un-American Activities) and pressured to both confess to Communism and name names, usually of long-time friends, lest they lose their career by being blacklisted.

Trumbo is a great film, pure and simple.

As sheer entertainment it delivers an absorbing, fact-based, high-stakes drama stuffed to the gills with a great ensemble of actors. Coupled to that is an emotional journey that dares show both sides of a polarising story.

Looking back at the era it’s easy to reassure yourself that you’d never do things such as inform on a friend or betray a principle. It’s the kind of comforting moral clarity that comes with hindsight.

While eager to detail the immense bastardry that went on, Trumbo’s morally tough-minded approach keeps things in context, and it’s these crucial dramatic beats that add understanding to the events and real grit to the drama.

Hence, the support given by John Wayne (played superbly by David James Elliott of JAG) to the anti-Communist crusade is shown to be driven by sincere patriotic conviction. Similarly, the backing actor Edward G Robinson (a terrific performance by Boardwalk Empire’s Michael Stuhlbarg) gives his Communist friends comes with qualifications.

Even the black-hearted gossip Hedda Hopper (a scene stealing Helen Mirren), who seems to embody the depth of  HUAC’s anti-Communist hatred, makes clear she is weilding her huge influence over the post-war readership for the sake of the flag rather in service to her Jovian ego.

To confess a bias, your humble reviewer has had a long-standing fascination with the Hollywood blacklist, so it is hopefully forgiveable that Trumbo might be getting a few extra plaudits here than might otherwise have been the case.

Then again, fore-knowledge of the topic would make Trumbo easier to fault, and that is very hard. Of course some dramatic license has been taken – that is always the case with a fact-based film – yet the comprehensive overview Trumbo gives of the era makes it a perfect film for the uninitiated to see, enjoy and learn from.

To that end, the film deserves special kudos for highlighting the role actor/producer Kirk Douglas (Dean O’Gorman) and producer/director Otto Preminger (Christian Berkel) played in breaking the back of the blacklist.

Watching these titans struggle to get their alpha-male egos to fit into the same frame really is testament to how much homework the film has done, and how good it proves to be in turning that research into fabulous entertainment.

The security, stability and comfort of a half century-old marriage begins to shake when a long-forgotten episode is suddenly pushed into the glaring light of the present.

Under the sensitive guidance of British writer/director Andrew Haigh – whose only other feature of note was the minor 2011 gay relationship drama Weekend – veterans Charlotte Rampling and Tom Courtenay project the type of quiet emotional torture that sudden doubt can have on a sense of self that has been largely defined through marriage.

45 Years is an outstanding, modest, moving adult drama. Longtime fans of Courtenay – best-known for his early works Billy Liar and The Loneliness of the Long Distance Runner, and later triumphs such as The Dresser and Last Orders – will rejoice in the richness and depth of his central performance.

Very well-meaning, very well-acted but rather earnest, by-the-numbers telling of the true life tale of Dr Bennet Omalu (Will Smith), a Nigerian medico whose research into the after effects of head trauma suffered by footballers changed the perception of the game and of the American National Football League, which tried to hush it all up.

Smith’s performance is solid, but Concussion’s plodding, procedural nature turns the drama into a bit of a do-gooder dirge.

The film was written and directed by noted journalist Peter Landesman, who also wrote the excellent Iraq war drama Kill the Messenger and wrote and directed the remarkable JFK drama Parkland.

What? It’s been done?

Rebel Wilson co-stars with Dakota Johnson (50 Shades of Grey) and Alison Brie (Sleeping with Other People) in another laxy, over-long relationship comedy that tries and fails to generate the type of ensemble buzz we got with 2009’s He’s Just Not That Into You.

The co-writer of the self-help book that was based on, Liz Tuccillo, also wrote the novel this lark was drawn from and worked as producer on Sex and the City, which laid the groundwork for this sub-genre of girl-focussed romantic comedy.

Simply lacking in laughs, the film is further hobbled by the uncharacteristically off-beam Wilson, who plays a sexually voracious lass who apparently enjoys lots of sex, yet is so blotto she can never remember the experience the morning after.

It’s an annoying contradiction in her character that’s never touched.

As for the broader issue of young women drinking to the point where they don’t know who they’re having sex with, well, sure it’s a comedy but…

Those who loved the comedy stylings of grim-faced Ice Cube and motor-mouthed Kevin Hart from their first hit buddy-cop venture, which took an impressive $155 million just two years ago, will find nothing to complain about here.

A warning, though: those expecting anything other than the type of laboured, pre-digested, seen-it-before comedy you get from a quickly made comedy sequel might find themselves in that special 10th circle of movie hell where you know exactly what’s going to happen half an hour before it does.

Strictly for fans, the film has already netted more than $110m worldwide in the face of widespread derision from critics. It’s yet another sobering example of popular taste telling critical opinion where to go.

From director Kevin Reynolds (Robin Hood; Waterworld) and Sony’s Affirm division, which specialises in films designed to appeal to the Christian faithful, comes a pretty good, handsomely produced, non-patronising Christ-based drama set in the days after the crucifixion.

A weather-beaten, thinner-than-usual Joseph Fiennes plays the Roman centurion ordered by the chunky Pontius Pilate (Peter Firth) to suss out these rumours that the bearded Jewish trouble-maker he’s just had killed is still around, inspiring people to question his authority.

Recently another Affirm film, War Room, quietly played to packed houses in Australia after proving itself a big hit in the US, where it took more than $70m against a puny production budget of $3m.

Seems Christ still has pulling power, even after all the years that have elapsed since The Passion of the Christ.