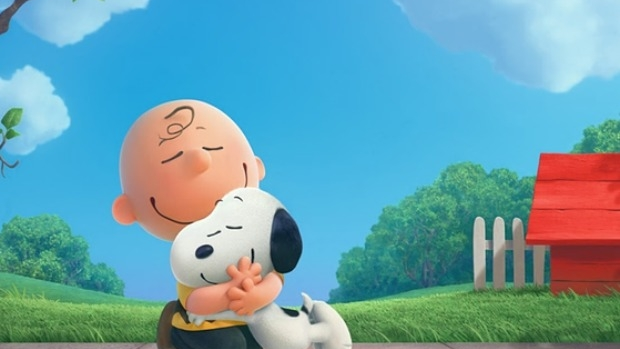 Anyone who possesses even a passing familiarity with Charlie Brown and the gang from Peanuts should find some appreciable measure of delight with this super-faithful feature film adaptation.

The much-loved characters from the Charles M Schulz newspaper comic strip – now 65 years old, would you believe – receive a perfectly fine, perfectly safe big-screen translation here at the loving hands of director Steve Martino (Horton Hears a Who; Ice Age: Continental Drift), working from a screenplay by Cornelius Uliano and Craig & Bryan Schulz (son and grandson, respectively, of the creator, who died in 2000).

Storywise, the film is almost desperate to hit all the well-known beats. Every Charlie Brown chestnut is there: Charlie Brown the loser; his crush on the Little Red Haired Girl; Snoopy versus the Red Baron; Lucy and her psychiatrist booth; Peppermint Patty; the kite-consuming tree; the ever-elusive football kick;  Linus and his blanket; Pig Pen and his attendant cloud of dust. (It’s some measure of the film’s faith that the one character most susceptible to being politically corrected hasn’t been touched, only washed).

As a skate-through Charlie Brown nostalgia, the film is enjoyable, charming, funny but lacking any real surprise. That’s the price you pay for not wanting to upset anybody. A touch of real cheekiness would have been most welcome.

It would have been nice, for instance, to see Snoopy – the ensemble’s edgiest, boundary-bending character – break form in his fantasy sequences chasing the Red Baron. He could even have done a Daffy Duck and broken frame. (Just thinking out loud here, folks.)

Careful to maintain the minimalist look and feel of the strip almost nothing has been updated. There’s not a iPad or digital device in sight. Even the phones are from the 1960s.

The digital animation is deployed sparingly, with special attention to imbue the characters with deliberately stilted movement, improving only a smidge on the look of the old animated features, the last one of which – Bon Voyage, Charlie Brown (and Don’t Come Back) – was made some 35 years ago.

Despite the film’s big box office – it’s taken more than $175 million – talk of a sequel have been tempered by the widow Jean Schulz. That’d be a pity. After all, every other big-screen character today has been given their own universe to explore. Why not Charlie Brown?

Exit, stage down: A character opts out of the pointless remake of Point Break.

If you’ve been searching for an example of just how bone-headed a remake can be, look no further.

This dire attempt to redo the nutty 1991 Keanu Reeves/Patrick Swayze action classic is a flat, story-lite showreel of admittedly impressive extreme sport stunts – replacing the original’s sunny surfing milieu – with no apparent interest in recapturing or topping the loopy magic director Kathryn Bigelow conjured so energetically 25 years ago. (Has it really been that long?)

Stepping into Reeves’ shoes as FBI agent Johnny Utah we have Australian actor Luke Bracey as a former ‘poly-athlete’. He’s on the trail of French eco-warriors who steal from the rich to give back to the impoverished.

This lot turn out to be a very poor substitute for Swayze’s gang of fun-loving surfer dudes who wore the masks of ex-presidents when they robbed banks to finance their lifestyle. Yes, Swayze went on about the spirituality of the waves and so on, but the film was drenched with sun and fun, especially when the action kicked in. And at the end of the day Swayze knew he was nothing but a crook who liked to surf.

In contrast, the thieves here consider themselves on a sacred quest to be at one with the earth, their crimes a form of cosmic retribution, or such like. There’s no irony in the pretension. Not once do we see Utah restrain the impulse to laugh.

Director Ericson Core also serves as cinematographer of the film (he shot the first Fast & the Furious film) and certainly there’s no disputing the visual quality of the film’s stunt sequences: people dive out of planes, through buildings, off cliffs, fly through valleys and outrun avalanches. The rock climbing sequence at the Angel Falls is the film’s best scene.

Unfortunately, the instinct he showed for drama with 2006’s Invincible deserts him here. The performances are tediously monotonal and, most distressing of all, there’s no trace of the much-needed homo-erotic bromance that fuelled the original.

Aussie actress Teresa Palmer chimes in with limited support but it’s the tired presence of Ray Winstone as Utah’s FBI overseer that really makes you wonder what compels actors to play ball in lifeless mulch such as this.