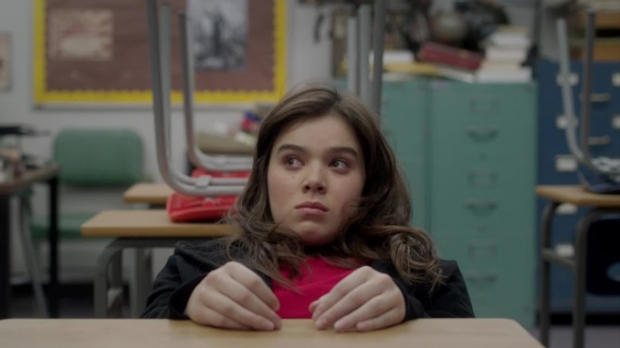 One of the toughest challenges facing any serious comedy about teenage life is to define something that is essentially indefineable. We came close in 2015 with Diary of a Teenage Girl, yet Edge of Seventeen hits the pubescent nail soundly on the head with a sureness of touch that easily makes it one of the best and most honest films thus far about the turmoil, delights and utter confusion of the teenage years.

The figure of awkward suburban teen Nadine (Hailee Steinfeld, so good in True Grit) is an instantly recognisable movie archetype – echoing the classic 1980s teen films of John Hughes – and her bumpy journey is one that wryly captures the emotional stumbles and contradictions that come with the swirl of hormones as girls become women.

For Nadine, all this stress is framed by the unwelcome advent of her best friend (Haley Lu Richardson) dating her jock of a brother (Blake Jenner). How can a friendship survive such an intrusion?

Under the exacting eye of screenwriter and first-time feature director Kelly Fremon Craig – here’s a clear example where directing your own script clicks – we feel for the funny/sad turns that beset Nadine, with particular note of what happens when a long-lusted after romantic dream literally lands into her lap.

Woody Harrelson puts in scene-stealing support as a deceptively uncaring teacher while veteran Kyra Sedgwick (The Closer) gives a well-etched portrait of a mother trying to raise two teens on her own. But the film belongs to Steinfeld, whose portrayal of teen life continues a rich tradition.

During a 120-year long interplanetary space trip to a new world, a lowly engineer (Chris Pratt) awakes from hyper-sleep some 90 years early due to a malfunction in his crib.

With over 5000 fellow passengers still sound asleep and with the vast, beautifully designed ship all to himself he tries living it up, even though he knows he will be long dead by the time the ship reaches its new home.

With only an android bartender (Michael Sheen) for company, he decides to wake up an attractive woman (Jennifer Lawrence), careful not to reveal his dastardly act while having sex with her.

There are some genuinely funny moments early on in this mega-misfire as Pratt deals with the ship’s various interfaces, but it grinds to a halt in its second half as the two begin dating while debating what they should do to get back to sleep.

While delivering some splendid imagery, director Morten Tyldum (The Imitation Game) just can’t find the heart in this sci-fi two-hander, which might have worked better had it been a half hour shorter.

Nonetheless, the film does serve as a timely metaphor for much of Hollywood product these days: beautiful, exacting visual work helping dress up a threadbare story. As for the characters, you only marginally care about them when it comes to dealing with an unco-operative airlock.

Even with Michael Fassbender in the lead (he’s also one of the producers) the adventure is a muddy, boring blur as a criminal (Fassbender) time travels back to the era of the Spanish Inquisition to take part in a series of frenetic fights and engage with a plot so scattered and fractured it’s a shame they don’t offer a prize for keeping up. Good luck trying to enjoy the film while trying to work out what is going on.

And what a waste of talent. Australian director Justin Kurzel, who gave us the haunting crime drama Snowtown, presides over this post-content stew of colliding storylines and dizzying digitally enhanced action; Marion Cottilard and Jeremy Irons appear in forgettable support; as for the magnificent Brendan Gleeson, he has a scene with Fassbender that is hard to make sense of. It really hurts seeing two great actors sharing the same frame in such an empty spectacle is enough to make you cry.

The general point again needs to be made about this compulsion for ‘big’ films to have such multi-layered narratives. A director needs to be absolutely on his game to make sure all plot points are clear, even if the film is moving at a million miles an hour. Fine examples would be the latest Star Trek film, the Ninja Turtle movies and the better super hero flicks (say, the first film in each sub-franchise).

When it comes to blockbusters, you can have clarity with complexity, but Assassin’s Creed is an example where a lack of clarity – due, no doubt to the impulse for relentless pacing – merely lends to confusion and, worse, tedium. Even with the Transformers films you always knew where you were.