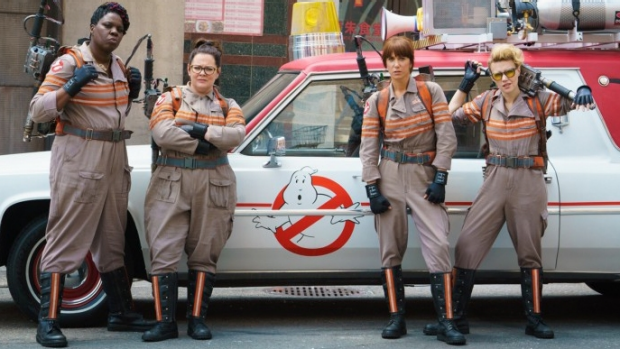 After the global wave of hatred roused by the reaction to the trailer for the all-female Ghostbusters reboot it turns out – as anybody could have guessed – that the film is nowhere near as bad as the mood of the room might have predicted. Heck, it couldn’t have been.

Of course, the film has neither the novelty nor the marvellous comic fizz of the now-classic 1984 supernatural comedy, in which Bill Murray, Dan Aykroyd, the late Harold Ramis and Ernie Hudson played New Yorkers who hunt and trap ghosts.

Nonetheless, one would haved hoped that director Paul Feig could have mustered more laughs from his Bridesmaids veterans Melissa McCarthy and Kristen Wiig. They manage to generate a passable number of laughs but the other members of the team, Kate McKinnon and Leslie Jones, seem to flail for screen time. Chris Hemsworth (Thor) gets his share playing their sexy but dopey receptionist, a fun character we can take as a sassy gender-switch of the dumb blonde cliche.

All up it’s a so-so comedy offering, with just enough entertainment value to not make you wish you’d waited for the stream or DVD.

The obvious thing missing from the shebang, is a story element to make you actually invest in the characters. In the original, we had all that wonderful stuff with Sigourney Weaver and her fridge – she and the rest of the original’s surviving cast all have cameos – but here there’s just a general threat to the city by some wacko. It’s just not personal enough.

It’s also got to be said how, despite the 30-plus year advantage the film has over the original, its swirl of visual effects can’t deliver anything as memorable as Sigourney’s self-cooking eggs. It’s yet another expensive example where the craft involved in creating these big-screen visuals aren’t being matched by imagination or originality.

And, for the record, it’s got to be said that this new Ghostbusters features what is, without doubt, the most desperate and sorry use of 3D in a major film.

On top of the built-in problems you already get with 3D – loss of brightness, blurriness, shadowing, a grand lack of visual impact – what they’ve done here to ‘enhance’ the 3D effect is artificially shorten the frame at the top and bottom so that when somebody fires off a proton beam or something, it ‘appears’ to leave the frame.

It’s about as lame a gimmick as you can get and represents a new low in the questionable enterprise of 21st century 3D. The studios really should stop trying to force this process down people’s throats. With very few exceptions, 3D adds nothing to the movie-going experience apart from a few dollars on the admission price.

Ewan McGregor plays a naive Brit who, while holidaying in Marrakech with his more-successful wife (Naomi Harris), receives an ego-boosting offer from a Russian crime lord (Stellan Skarsgard) who wants his new friend to give MI6 a flash drive full of hot info about the Russian mafia.

Naturally, things don’t go according to plan as our hapless hero finds that trying to do the right thing isn’t so easy in a world filled with more suspicion and subterfuge than when the Cold War was a thing. Damiel Lewis (Homeland) puts in superb support as the stiff MI6 suit.

In one of the more diverting and original deployments of the rom-com recipe, the ever-likeable Greta Gerwig plays a lonely New Yorker stricken with quarter-life crisis whose plans to have a child on her own are thrown off course when she befriends a married teacher (Ethan Hawke), who she promptly has an affair with.

With remarkable smarts, writer/director Rebecca Miller (Personal Velocity; The Private Lives of Pippa Lee) doubles the dramatic stakes by dividing the story with a brilliantly timed and executed jump cut.

Julianne Moore is terrific as the high-IQ wife while Gerwig again shows her flair for these types of wistful independent urban comedies.

It’s Castaway meets Weekend at Bernie’s as a man lost on an island (Paul Dano) finds a corpse on the shore (Daniel Radcliffe) and promptly brings it to life the way Tom Hanks did with Wilson.

Perverse, funny, oddly insightful – well, how else would somebody react after being so starved of human contact? – the film is a prime example of how enjoyable an oddball arthouse movie can be when everybody just goes with the idea and pushes it to its logical conclusion.

The film’s writer/directors Daniel Scheinert and Daniel Kwan play on the story’s fantasy element without pushing too far and certainly squeeze every gag they can out of after-death flatulence. And Radcliffe earns special credit for taking this on. He’s done such a great job running his own race as an actor you really do have to remind yourself that, yes, he was once Harry Potter.

The latest attempt to bring Tarzan back into the multiplex fold – the last one was Disney’s wonderful, somewhat underrated 1999 animated musical, which took about $500m worldwide – is a perfectly worthy, action-packed package that ticks most of the boxes you want: thick, forbidding jungle; huge, scary CG apes; people swinging from vines; angry natives throwing spears at guys in pith helmets; a villain who wants to enslave the Congo; a hero with great abs; and, of course, a lovely female lead.

We get all that in this enjoyable jaunt, which takes place after John Clayton – aka Tarzan – has been brought back to civilisation to resume his privileged position as the Earl of Greystoke. (We get the well-known raised-by-apes origin story in short bursts of flashback).

A nasty Belgian official, played nicely by Christoph Waltz channelling his affable Nazi from Inglourious Basterds, has grand plans to cover the Congo with troops in order to bring the population to heel and corral them into forced labour.

An expedition to stop them soon has our hero (played with all due gravity by Alexander Skarsgard) stripped down to his magnificent torso and swinging from the vines, just like we want him to. (Alas, there is no signature bellowing, which would have been nice as a tribute to the original Tarzan, Johnny Weissmuller).

Director David Yates (he did the final four Harry Potter films) does a fine job staging the effects-heavy action and gives us a nice, revenge-laced finale involving some suitably over-sized crocodiles.

The only real disappointment is now that Tarzan is civilised and married to Jane (Margot Robbie) there’s none of the traditional sexual tension running under the adventure. Still, Robbie, who sports another convincing accent, gives us a feisty Jane, despite being the piece’s damsel in distress.

These involve prostitution, corruption, murder and Jacki Weaver giving her Animal Kingdom death stare as she discharges her responsibilities as mayor, chiefly by seducing people with sponge cakes.

Writer/director Ivan Sen conjures up some stark images – how can you not, given the location? – but while he has a genuine flair for staging pungent, noirish vignettes, Sen’s attention to story-telling basics is way too sparse and sloppy.

Goldstone might look great but it has plot holes as vast as the Outback itself . These hobble any attempt at creating tension or even maintaining dramatic plausibility, a quality in which the film does not seem particularly interested.

Inconsistencies abound, major events occur and are promptly forgotten about, shot guns and machine guns go off without anybody apparently hearing anything. (How one scene escaped Sen’s eye might make him rethink the wisdom of being his own editor.)

The story also suffers from having Swan back on the sauce. This guy already went through hell in the first film. Did he really have to start this adventure as a cliche who doesn’t appear to have learnt anything?

Despite the threadbare quality of its narrative, Goldstone has nonetheless been subject to some of the most generous and circumspect reviews for a local film in recent memory.

It’s arguable whether white movie critics show undue favour to films by indigenous filmmakers – Aaron Pedersen disagrees with this point in an interview to be posted shortly – yet had the same film hailed from America or Britain it’s hard to imagine it not being summarily dismissed as the pale, sketchy follow-up that it is.

The political tables are turned on a wealthy Jewish couple when the Shah of Iran is replaced by the Ayatollah Khomeini and a lot of locals start using the New Order to exact some pent-up revenge.

For jeweller Isaac (Adrien Brody) and his well-kept wife Farnez (Salma Hayek) it means an immediate split in their happy home as Isaac is suddenly arrested and imprisoned. Even their maid Habibeh (Shohreh Aghdashloo) begins turning on her employer, now proud that her son is part of the new wave of oppression.

Though the film, made in 2015, has pretty much failed to make any impression either with audiences or critics, it is an effectively mounted portrait of how regime change can help mask the agendas of the lawless. That two highly-regarded indigenous filmmakers would dare take on such a risky project also deserves kudos for courage, however belatedly.

Bundled with Dirty Grandpa and Bad Neighbours 2, the release of this forgettable, scatter-brained R-rated comedy belch marks the completion of Zac Efron’s informal film trilogy, the chief message of which appears to be ‘I will now say ‘yes’ to anything’.

While the former High School Musical starhas earned his right to be the badass and to rough-house it on-sceen with major movie drawcards, one does wish he would have indulged his new-found talent for raucous comedy with something a little more deserving.

Clearly inspired by the trashy Vince Vaughn/Owen Wilson comedy The Wedding Crashers (duly referenced in the film), Efron plays half of a naughty, party-loving brotherly duo opposite Adam DeVine (Pitch Perfect; The Intern).

A family intervention forces them to get ‘real’ dates for their sister’s upcoming wedding, and their public appeal nets them two high-strung phonies played by Anna Kendrick (Pitch Perfect; Up in the Air) and the perfectly cast Aubrey Plaza, who stole Dirty Grandpa by so convincingfly playing the lecherous teen who wanted to boff Robert de Niro.

Sadly neither she, nor the rest of the comic quartet, are given anything as remotely funny or edgy to do in what is essentially a dull film with a lot of noise but little actual comedy.