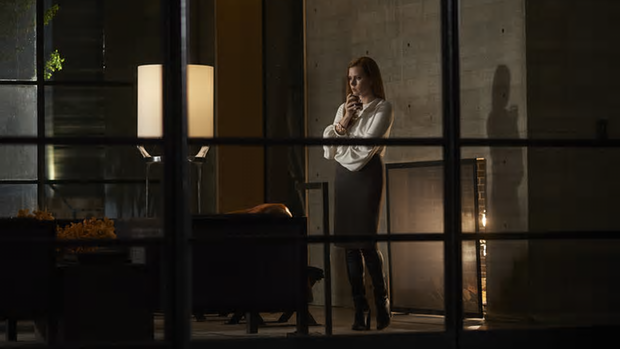 After his debut triumph with 2009’s A Single Man – why didn’t Colin Firth win the Best Actor Oscar? – writer/director Tom Ford returns with a terrific package deal, with one film wrapped inside another.

On the outside we have a glossy arthouse film in which Amy Adams plays a discontented upper- class gallery curator in a failing marriage who gets a manuscript from her ex (Jake Gyllenhaal).

Called Nocturnal Animals he’s very eager for her feedback, given how he broke through a bout of writer’s block by taking her advice to ‘write what he knows’.

So, alone in her gleaming, spacious abode of soft cushions and sharp corners, she starts going through it, rendering the story in her mind for us all to see.

Out on a highway in the middle of America’s badlands a car with a family of three – played with increasingly jagged nervousness by Gyllenhall, Isla Fisher and teenager Ellie Bamber – is harassed and forced to the side of the road by two rednecks with the kind of accents that just tell you they consider Deliverence a documentary.

What happens then is sickening and violent, made all the more intense by Ford’s deliberately slow and detailed direction as he juggles notions of consent and moral ambivalence.

Meanwhile the rednecks appear to be having a better and better time of it, their nocturnal adventure interrupted periodically as Susan jolts herself back into the real world of glamourous art gallery openings and mounting debt.

A good way to describe this film is like the cinematic version of a Kinder surprise, with a ripping B-grade badlands thriller wrapped inside an A-grade art movie. It certainly is edge-of-the-seat stuff and affirms Ford as a director with a cool eye for detail and a hot touch for transgression.

One of the many perils of being a full-time film critic is that, occasionally, your opinion of a film stands in stark contrast with the rest of humanity.

Liking a film everybody else hates might set one or two cats among the pigeons. However, dissing a film everyone on earth appears to be praising to the heaven’s can make one feel cold and alone at the end of a very long limb.

Arrival is just such a case.

Directed by the very able Denis Villeneuve (Sicario; Prisoners; Incendies), Arrival is an alien visitation film very much like many others that have come before.

Suddenly one day the world awakens to discover space ships that look like giant surfboards floating gracefully in various locations around the world.

In America, the authorities send in a language expert (Amy Adams) and a mathematician (Jeremy Renner) to go inside the ship, make contact with the aliens therein (who, incidentally, resemble simple squid).

Slowly but surely – but with the emphasis on slowly – contacts is made as the odd alien language is deciphered and their inter-galactic intentions become clearer.

As profound and self-important as Arrival appears to think it is, your humble reviewer found it a yawn-inducing snoozefest that borrowed from every science fiction film from The Day the Earth Stood Still to Close Encounters of the Third Kind to ET to Contact.

Anyone with a passing knowledge of sci-fi will likely find the film excessively derivative.

Those simply hungry for a good old-school, alien-based sci-fi adventure will decry the films lack of ray guns.