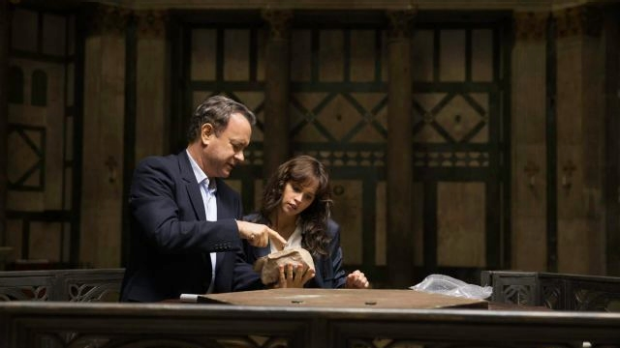 Admittedly, this third adaptation of a mega-selling Dan Brown religio-thriller doesn’t have the ‘what’s all the fuss about?’ novelty of The Da Vinci Code or the exploding priests of Angels and Demons (can never get enough of those), but it does make for another entertaining, proficiently mounted follow-the-clues chase caper. As symbology professor Robert Langdon, Tom Hanks is all beaten up  and suffering from amnesia when he wakes up in a Florence hospital with his cute nurse Felicity Jones looking after him. Enter a would-be assassin and the pair are on the run, trying to track down a device that will wipe out half the world’s population. This plan  comes courtesy of a major loon and prophet of doom (Ben Foster) who wants to prevent the major apocalypse of over-population by igniting his own semi-apocalypse as a preventative measure. And, yes, he does sound like an old-school Bond villain, doesn’t he?

It’s briskly paced, pulpy fun full of improbable twists and chases, though it contains less overt God content than the other films, which unfortunately depletes its potential to offend religious types. Ah well, you can’t have everything.

In this great, big, fat, juicy slice of masterfully directed melodrama a frumped up Emily Blunt plays a desperate woman who becomes obsessed with a couple she fleetingly sees each day while riding a train. Director Tate Taylor (The Help; Get On Up) quickly develops this gossamer-thin idea into a tale of betrayal, infidelity and domestic warfare that involves two other women, equally driven and full of passion as our titular lass. Much like Gone Girl, this is a high-voltage chick flick with a non-linear story that’s brimming with left turns. The remarkable central performance by Blunt should put her in the outside running for an Oscar.

Hot on the heels of the excellent Alex Gibney doco Going Clear: Scientology and the Prison of Belief comes a more personal, less forensic, far more insulting look at the religion. TV documentary specialist Louis Theroux tries diving deeply into the workings of Scientology but can’t get passed the front gate. Thus he has to rely too heavily on witness testimonials and recreations, which awkwardly include the casting of actors in the roles of Scientology chairman David Miscavige and star Scientology spruiker Tom Cruise. The best bits come when Theroux goes nose-to-nose with Scientology camera crews who have a habit of popping up out of nowhere to film Theroux as he films. It’s a jokey illustration of just how powerful and far-reaching the church’s influence has become. Theroux himself sometimes seems to doubt whether he’s making much progress, but it’s an entertaining trip all the same.

To be honest there’s not all that much story stapled to this vivid recreation of the 2010 oil rig disaster: men go to oil rig; oil rig explodes; men jump off oil rig. The causes for the calamity are detailed mainly through the not-very-friendly portrayals of senior BP personell – the film’s screenplay was one of the most legally scrutinised in history – who apparently didn’t care as much about safety protocols as the actual workers (ably played with working-man gusto by Mark Wahlberg and Kurt Russell). When things start going haywire, however,

director Peter Berg (Friday Night Lights; The Kingdom; Hancock; Lone Survivor) unleashes a prolonged, meticulously orchestrated bonfire of such magnitude and veracity you need to remind yourself it’s a recreation and not the real thing.