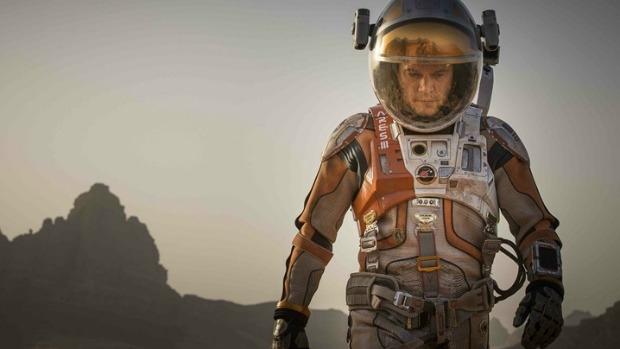 Just when we thought we’d had conclusive proof that Ridley Scott had gone off the boil – with Exodus, Prometheus, The Counselor and Robin Hood offering plenty of painful evidence – he delivers The Martian.

Not only is The Martian one of Scott’s very best films – up there with Alien, Blade Runner and Gladiator – it’s easily one of the most engrossing, enthralling and entertaining films of the year.

Left behind on Mars by his crew mates in the mistaken belief that he’s dead, botanist Mark Watney (Matt Damon) struggles to survive alone while trying to alert Earth that he’s still breathing and eager for a ride home.

Meantime, those on Earth twig to the changes evident in orbital photos that the Mars mission might have left too soon. Going back to get their man is a monumental and risky task, but the billions in costs involved dissolve before the desire of billions across the world, all avidly following the unfolding saga on TV and the net, who want to see Watney rescued.

Cutting between Watney, NASA and the crew on the returning space ship, Scott sets in motion a flywheel of tension that builds and builds until you find yourself totally invested emotionally in the rescue.

It’s also an adventure of ideas that celebrates science. Like Ron Howard’s  Apollo 13, hard thinking, problem solving and sheer ingenuity form much of the drama’s backbone. (Even the phrase ‘work the problem’ appears to have been borrowed from it.)

In a fabulous moment when confronted by what seems an insoluble problem, Watney utters the memorable quip: ‘I’m going to have to science the s*** out of this.’ A great line. Plus, it’s a new high-watermark in the dominance of geek-speak in pop culture that a noun as formerly square as ‘science’ could be made cool by turning it into a verb.

While most of Damon’s sterling performance is done straight into the camera as he blogs his ordeal and tries signalling Earth, the film features a top-flight ensemble cast including: Jeff Daniels (a standout as the NASA boss); Chiwetel Ejiofor (how versatile is this guy?); Sean Bean; Jessica Chastain; Michael Pena; and Kristen Wiig, who is terrific as NASA’s stressed PR officer.

There are also Chinese actors in it, testament to the film’s marketing smarts. As NASA’s need for co-operation with other space programs swells, we get some subtitled scenes as China steps in to see if there’s anything it can do. The scenes are a little awkward, but they’ll no doubt help the film’s fortunes when it opens in the world’s fastest-growing movie market!

The film looks and sounds great. Cinematographer Dariusz Wolski, a long-time Scott collaborator, vividly evokes the beautiful desolation of the Martian wastelands with a little artistic license – the film was heavily researched, but this is not a documentary – and the VFX team give the tense scenes in space the kind of fist-clenching veracity we saw in Gravity and Interstellar.

Indeed, The Martian neatly links up with those two other 21st century survival-in-space films to form an informal trilogy about the human spirit and the evolutionary place of technology.

It also fits that bill cinematically, for unlike most of the stuff offered up as mass-market entertainment, The Martian dares to pace itself for adults who are willing to be entertained and entranced while having their hearts and minds engaged.

In one of those pleasant examples of a movie doing precisely what it promises on the poster, Robert De Niro plays a widowed retiree who needs to return to work after working through the ‘to do’ list for retirees. He gets a job as an intern at a swish online fashion house working for an over-worked boss, played by Anne Hathaway playing a younger version of the Meryl Streep character she played opposite to in The Devil Wears Prada.

With writer/director Nancy Meyers (It’s Complicated; Something’s Gotta Give; What Women Want) again working her considerable skills on the older movie-going demographic – and God bless her for that – The Intern offers standard old-school meets new-school comedy as old guy learns things from young guys and vice versa, with the inevitable jokes about digital technology and erections.

Not quite sure about the moral soundness of the resolution brought to Hathaway’s domestic troubles, but that slight aside The Intern is easily digestible cinematic comfort food with a warm feel and a pleasant after taste.

A well-made, arrow-straight, disappointingly conventional version of Shakespeare’s greatest potboiler from Aussie director Justin Kurzel (Snowtown). Michael Fassbender is fine as Macbeth, Marion Cottilard solid as his bad lady wife, but the film simply droops in comparison to earlier versions, most notably Akira Kurosawa’s Throne of Blood (1957) and Roman Polanski’s visionary, bloody Macbeth (1971), which still stands as a giant amidst all versions.

It’s a point often made, with good reason, that when stories are retold or remade on film we are fully entitled to expect something exceptional that reflects the time gap. Alas, even with a 44 year advantage, Polanski’s bloodbath still has it over this worthy, if wearying effort.

Based largely on his life-changing experience as a liver transplant recipient, veteran writer/director Paul Cox conjures a heartfelt, if slow-moving drama about a sculptor Robert (David Wenham) stricken with liver cancer. Admittedly, there are a few too many shots of symbolic birds, too many muted emotions and a romance with an Indian woman (Shahana Goswami) that brings the film to a crawl. But carping aside, there’s no doubting Cox’s dedication to his signature style. As with Ken Loach, it’s so recognisable he barely needs a credit. And Cox does sport a unique turn of phrase with Wenham’s voice over.

(See our interview with Paul Cox)