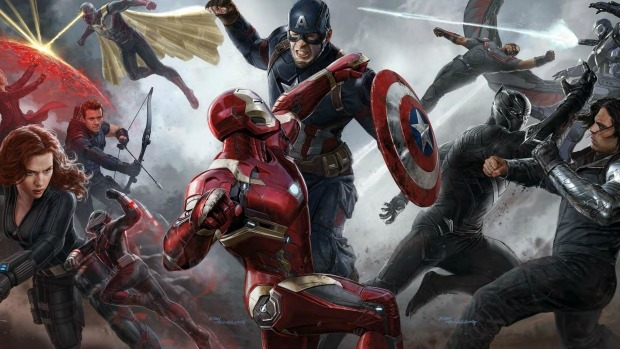 After the assault on decency that was Batman vs Superman, it was feared – with good reason – that millions of movie goers might well have given up on ever sitting through another superhero movie again or, to go one further, on stepping inside a cinema ever again.

Just in the nick of time, however, we have Captain America: Civil War here to remind us that all is not lost, that the over-stressed comic book genre can still knock out a good, disposable piece of FX-driven entertainment, even if it must come with the obligatory one-act storyline, lack of originality and 30-minute over-run.

This latest adventure continues the genre’s pre-occupation with the collateal damage caused by superheroes – a theme we saw in Pixar’s The Incredibles (2004) but that goes as far back as 1978’s Superman: The Movie when Lex Luthor (Gene Hackman) told Superman (Christopher Reeve) he’d be getting a bill for the door he just smashed through.

So The Avengers are put on notice. The world is sick of them doing as they please and wreaking havoc everywhere so the United Nations will now supervise and regulate their activities.

Half the team, lead by Iron Man (Robert Downey Jr) thinks it’s a good idea; the other half, lead by Captain America (Chris Evans), thinks not. They then essentially spend the rest of the film duking it out in a series of elaborately staged confrontations designed to distract you from the fact that the story never really develops any further.

With some new characters joining in the melee, the film is the usual swirl of visual effects and flurry of all-but-incomprehensible subplots, all of which can be readily explained to you afterwards by any fanboy, that special breed of comic-book loving filmgoer who know all the superhero backstories like scripture.

Even given its scramble of storylines, Captain America III – though it could easily have been called Avengers IV or Iron Man V; it’s hard to tell these sub-franchise films apart these days – is an entertaining, largely nonsensical jumble that will especially appeal to young teenage boys (watch that M rating) and those girls who consider the sole presence of Scarlett Johansson as…who is she again? Black Arrow? No…Black Widow enough to rectify the film’s monumental gender imbalance.

(And to digress quickly – Come on, Marvel! Where are all the female superheroes movies? According to Internet you’ve got dozens of candidates!)

Also, there was clearly no issue with budget on Captain America III.

There’s one genuinely remarkable action sequence at an airport that goes on for so long it appears directors Anthony & Joe Russo (Captain America 2; You, Me & Dupree) received a call from the studio telling them they had an extra $20 million to spend on it. Seriously, you’ll have time to step into the foyer to check your messages and get back in plenty of time before the final punch is thrown.

If this enjoyable, disposable oversized slab of cinematic chewing gum does portend anything, it’s the fragile longevity of the superhero genre.

If you start your count with Tim Burton’s Batman (1989), we’ll soon be clocking up a 30-year run of films that will include a whole new slew of super dude films due out in the next few years.

The record-setting drop-off in the second weekend audiences for Batman vs Superman clearly signalled that audiences won’t put up with any old crap, and that the genre might be showing signs of fatigue.

Hard sell: John Clarke and Anthony LaPaglia in the bitter-sweet A Month of Sundays.

In this beautifully mounted, subtle, touching and bitter-sweet comedy drama, a ragged Anthony LaPaglia – an actor clearly undaunted by portraying what many middle-aged men actually look like – plays Frank, a real estate agent in an emotional crisis.

With the death of his mother and his marriage still pressing on his heart, he receives a phone call from an old woman who claims to be his mother.

There’s but one gripe, and it’s to do, yet again, not with the quality of an Australian film but with the selling of it.

You know, we’ve just come off a great year with 2015 illustrating – loud and clear – how good movies combined with good marketing typically end up connecting with audiences in a big way.

But with A Month of Sundays we appear to have a re-emergence of the problem we had in 2014 where really good films were let down by a lack of profile, so that their release went largely unnoticed by the public.

To labour the point made many times before, if A Month of Sundays was an American film you’d have known about it weeks ago through TV ads and signage, and it would have made a tidy packet at the box office.

The fear here is that, once again, we’re going to see a good, mid-range Australian film come and go without trace simply because the audience didn’t know it was there. It’s precisely what happened to Saville’s previous film Felony.

Here’s hoping against hope that this prognosis is wrong, because if there’s one thing A Month of Sundays deserves it’s an audience.

Speaking up: Director Margot Nash (right) explores her relationship with her parents in The Silences.

Troubled by the mysteries of her own family history, filmmaker Margot Nash (Vacant Possession) dug deep into the backstories of her parents and sisters to discover the truth behind her uncomfortable childhood.

Using archival material and clips from her own films, The Silences is a lyrical, sometimes haunting assemblage of what she found and highlights the stark contrast between how mental illness is regarded today and how it was dealt with over half a century ago.