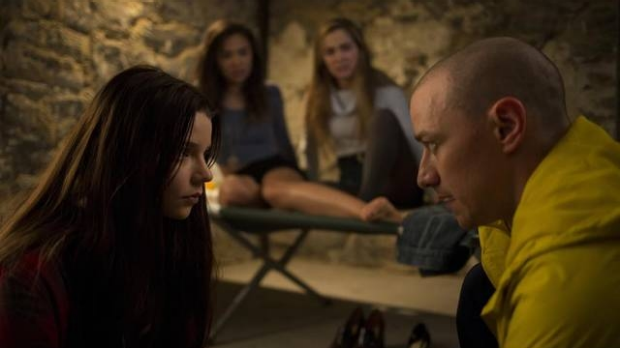 The welcome return to form of director M. Night Shyamalan (The Sixth Sense) continues apace with Split, an armrest-clutching psychological thriller that is bound to render you breathless by the time the credits roll.

In a career-topping performance, the versatile James McAvoy (Atonement; X-Men; Filth) plays a mentally ill gent with 23 personalities, possibly more. He seems to be on the improve as far as his kindly psychologist (Betty Buckley) is concerned, though she only sees him one personality at a time in the comforts of her plush office, for out in the real world the nastier sides of him are up to no good.

That involves the brazen daylight kidnapping of three teenage girls (Anya Taylor-Joy; Haley Lu Richardson; Jessica Sula) and keeping them imprisoned in a specially-built dungeon – with ensuite – for purposes unknown.

Cutting between therapy sessions and the mental torture the girls endure as they encounter the  different sides to their deranged host, Shyamalan tightens the tension to an extraordinary degree. And whereas his previous white knuckler The Visit had copious amounts of humour to take the edge off the terror, here there’s no such relief valve.

Hopefully the sturdiness of Split signals a settling down of the director’s style. After The Sixth Sense, Unbreakable and the mega-hit Signs came clunkers such as The Village, Lady in the Water, The Happening and the sci-fi fiascos The Last Airbender and After Earth. Whatever he was chasing with these misfires he clearly didn’t find it.

Now, with the spirit of Alfred Hitchcock watching over him, Shyamalan seems to have recovered his bearings. Here’s to him clutching them ever tighter so as to challenge the chicken within all of us.

With the sudden death of his brother, short-tempered janitor Lee (Casey Affleck) must return to the small, titular town where he grew up to oversee the well-being of his extended family and the execution of his brother’s will.

Without prior warning from his brother, Lee finds himself in charge of discharging the fate of a boat and a house, which brings him uncomfortably close to his womanising nephew.

Imbuing these onerous tasks with a sense of morbidity is the memory of a tragedy, which we see in very carefully placed flashbacks and which account for Lee’s increasingly defeatist demenaour.

In such rich slice-of-life dramas as You Can Count on Me (2000) and Margaret (2011), writer/director Kenneth Lonergan has shown his uncanny ability to capture the revealing nuances of small moments, and how they reflect on the nature of larger matters. For instance, one scene involving the mere opening of a car door seems trivial, yet speaks to the larger issue of the disconnect between the two people involved.

He also stages dramatic moments with great, unexpected force. Having lulled you into a false sense of complacency, Lonergan will suddenly change gear and jolt you out of your seat.

Yet while the performances he elicits from his A-grade cast are earthy and believable – especially from Affleck and Michelle Williams – Lonergan does tend to go on and on with his dogged pursuit of everyday authenticity often resulting in scenes and dialogue exchanges that just go around in circles.

There is an in-built drabness to the drama of Manchester by the Sea that, while never exactly boring, takes far too long to get to its sobering yet unremarkable payoff. We all enjoy a good downer, but not one that also manages to tire us out.

Though it boasts almost universal critical acclaim and eigh Oscar nominations, writer/director Barry Jenkins’ well-made, heartfelt tale of a young black man trying to survive the suburban jungle of Miami starts strongly but slowly grinds to a dead stop long before it ends.

What begins as an arresting blend of lyrical storytelling and bad-neighbourhood harshness – a skillful collision of the poetic and the prosaic – gradually ferments into a relentlessly melancholic dirge in dire need of somewhere to go.

Divided into three parts, we follow the trials and misfortunes of a youth called Chiron, first as a boy, then as a teen and finally as a young man (played respectively, and with all due intensity, by Alex Hibbert, Ashton Sanders and Trevante Rhodes).

A good student, Chiron is burdened with shyness, a crack whore for a mother (Naomie Harris, giving her all in a few pungent scenes), a sexual identity crisis and some major bullying issues.

Fortunately, he is befriended early on by Juan (Mahershala Ali), a kindly gent who teaches him to swim and have self respect. But there’s a limit to Juan’s value as a positive role model as he’s also a crack dealer who counts Chiron’s mum as a regular client.

The film assembles its character portrait of woe very well and very efficiently, with Jenkins and his cinematographer James Laxton showing a love for moving their camera through busy scenes in a single take.

Yet Chiron’s journey becomes slowly overwhelmed by the film’s swelling sense of self-importance. We’re meant to read great profundity into every pregnant pause and depressing turn, as though the issues of troubled black urban youths are being raised on film for the first time. It becomes very tedious very quickly.

And, frankly, Moonlight simply runs out of puff, with too little in the film’s final chapter to drive it home to a closure that is dramatically satisfying. The film’s critical adulation and its eight Oscar nominations tag Moonlight as an early contender for the most overrated film of the year.

What a totally unpleasant surprise Ben Affleck’s gun-happy, empty-headed gangster film turns out to be. After doing such a great job directing Gone Baby Gone, The Town and Argo, one might reasonably have expected that the prospect of Ben Affleck writing and directing and starring in an old-style gangster flick would deliver something gutsy, coarse, realistic and raw. And fun.

Yet the film is none of these things. Affleck does stage a few opening chapters that set the scene for a bullet-riddled thrill ride through the reliable old gangster tropes of bootlegging, gambling, prostitution and drugs, with a ripper of a car chase full of promise of great treats to come.

But when Affleck’s Mafia-endorsed wiseguy Joe Coughlin goes south, so does the film.

Though the period sets, scenery and costumes help make Live By Night a singularly attractive film – legendary cinematographer Robert Richardson (Casino; Django Unchained; JFK) gives us something that at least looks beautiful – what’s really needed is a strong story that holds up to common sense. Regrettably, that isn’t the case.

Based on the novel by Dennis Lehane (Mystic River; Boardwalk Empire; The Wire), we have a sloppy narrative so full of holes you’d think somebody had taken to it with a Thompson sub-machine gun.

Example: one episode involves the building of a mafia casino that is hampered by the objections of a former prostitute who is born-again (Elle Fanning) and rails against Coughlin’s plans.

Now, while she’s a real thorn in his side, the film itself actually shows us the means by which this noisy snag can be made to shut up.

Yet, in another example of post-content 21st century story-telling, we are expected to instantly forget what we have just seen in one scene so that the next scene makes sense. It really is a mess.

That Coughlin is presented as a gangster with a tinge of conscience doesn’t help paper over the film’s many flaws, and his ability to shoot at his foes without missing (a skill shared by his henchmen) is simply irritating. He also seems to forget how the Mafia works. Why, for instance, would he think his mob boss would overlook his refusal to develop their narcotics business?

Perhaps Affleck should have cast somebody other than himself in the lead, somebody he could have been a bit harder on, because gangsters are at their most interesting when they show you how little they care about the consequences, not how much.

Daniel Radcliffe has done a good job proving his versatility since Harry Potter, and his terrific work in the fact-based crime thriller Imperium shows just how effectively he can harden up for a tough role.

With his Potter glasses back on, Radcliffe plays a nerdish FBI agent who is persuaded by a colleague (the ever-reliable Toni Collette, aka Muriel) to drop the glasses, shave his head and go undercover to infiltrate a white supremacist group suspected of assembling a dirty bomb. Apart from the physical danger he faces, the film is pretty brutal about FBI procedure, accounting for some pretty snappy plot twists, and is super-topical given the ever-present threat of home-grown terrorism (many examples of which are referenced). As his keeper, Collette does a terrific job as a maverick agent trying to bring her charge up to speed. The film is strongly recommended.