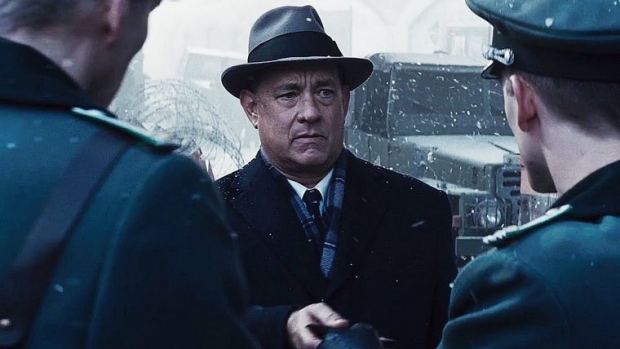 Somehow Steven Spielberg – once the most enthralling, populist and cinematic of all mainstream directors – has turned an exciting page in Cold War intrigue into a dry, turgid history lesson. The downing of spy plane pilot Gary Powers in 1960 and his subsequent capture and show trial are inexplicably shoved into the background in deference to a largely boring account of how insurance lawyer James Donovan (Tom Hanks) negotiated his release in exchange for a Russian spy. The first hour, in which Donovan reluctantly but valiantly defends the spy (played by British actor Mark Rylance in the film’s only interesting performance), provides a great opening innings, but once the spy plane story kicks in Spielberg proves completely uninterested in using it to generate any tension or action. Instead, we have endless scenes of suited men in wood-pannelled rooms nutting out the details of the proposed exchange. Old-schoolers with strong memories might remember the excellent 1976 telefilm Francis Gary Powers: The True Story of the U-2 Spy Plane Incident starring Lee Majors and directed by Delbert Mann (Marty). It’s a much better film. Check it out on YouTube.

Hot on the heels of unIndian comes another, better Australian cross-cultural romantic comedy, this one involving a Greek gent called Alex (Richard Brancatisano) who falls for a Lebanese Muslim woman Eve (Andrea Demetriades). Both, of course, have strict, loud families, and both families, of course, have far more in common than their strident traditional beliefs would suggest. Strong performances and a good comic sense from veteran TV director Peter Andrikidis help get the message across that love conquers all. Or, at least, tries to.

Former Michelin-rated chef and drug addict Adam Jones (Bradley Cooper) emerges from a self-imposed penance (shucking one million oysters) to try and reclaim his status in the kitchen and get his third star. The problem for him is that he has a crushing drug debt and a trashed reputaton. The trouble for us is that he is a thoroughly detestable character and the story is pitted with the type of holes that suggest the film went into production with an uncorrected first draft. For instance, we’re expected to swallow how Jones forgot all about how he once sabotaged a rival’s restaurant by letting rats loose in it, then calling the health inspector. And that’s just one of the many free passes we’re meant to hand out to this film. Cooper is a strong presence, as usual, and when things get hot in the kitchen he lets out a good Gordon Ramsay impersonation. Yet the best thing about Burnt is that it points us back to last year’s Chef by Jon Favreau, a film that dealt with many of the same themes in a far better, funnier, more believable manner.

Six films into the found-footage horror franchise and the inevitable has happened – they’ve run out of ideas. So much so, in fact, that this installment – the last in the series so we are promised (thank you, Movie  God) – actually features a ‘ghost’ covered in, of all things, a bedsheet. That, ladies and gentlemen, is just not trying. Designed for a quick Halloween box office kill, the story involves a household that discovers an old video camera that can capture apparitions. The film just isn’t scary, even though it features the cliche of a little girl who makes friends with demons. Sigh. Where are the torrents of green vomit when you need them?

Looking for scares: a little girls checks out the paranormal damage to her bedroom in Paranormal Activity: Ghost Dimension.

The thing about absurdist comedy is that it helps to be funny, poignant and/or succinct. This overlong mess from Greek director Yorgos Lanthimos (his first English-language film) is none of those things. It starts out fine as we are introduced to a world where lonely people go to a hotel where they have a set number of days to find a partner. If they don’t, they get hunted down by other patrons and get reincarnated as an animal of their chosing. Colin Farrell – a good actor hobbled by too many poor choices – is the central loser who encounters another lost soul in the comely form of Rachel Weisz. The film doesn’t seem to know when to end.