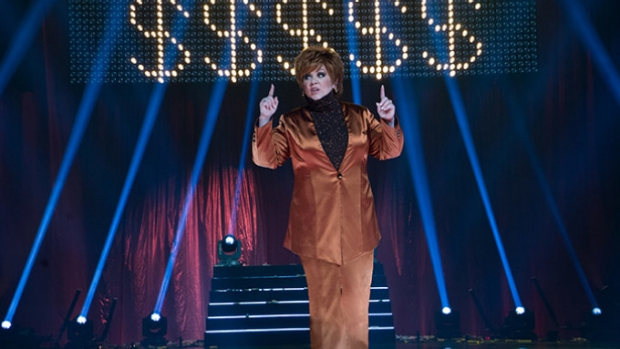 Hot on the heels of Spy, Melissa McCarthy strikes while her iron’s hot with another pleasing lark, this one featuring one of her more daring performances.

McCarthy plays Michelle Darnell, a neglected child who grows up to become a hugely successful self-help guru before misfortune has her moving in with her former assistant (Kristen Bell).

With dauntless courage she faces down a long-time rival (Peter Dinklage) and attempts to rebuild her fortune by rethinking the girl scout cookie business.

While her role in Spy played to her obvious strengths as a big-mouthed woman who is not to be messed with, this film – which she co-wrote with Steve Mallory and her husband/director Ben Falcone – really demands that she maintain a veneer of self-taught wisdom and fortitude throughout. It’s pretty impressive, especially after her bland out in Tammy.

She also sprinkles her performance with nice little bits of business as she sets about teaching her girls that life is tough, and that making it, even as a girl scout, requires a lot of grit and a good aim when throwing a left.

In search if meaning: Tris (Shailene Woodley) leads her rebel pals through the wasteland in Allegiant.

In the third of the four Divergent films – we’ve had Divergent (2014) and Insurgent (2015); we get Ascendant in June, 2017 – teen rebel leader Tris (Shailene Woodley), her bland boyfriend Tobias (Theo James) and the rest of their small team have finally made it over the giant wall that encircles the post-apocalyptic shambles of Chicago.

Chased across this impressively rendered wasteland they finally discover the hard truths behind what has been happening in their city and why its various castes were devised.

The new main character is David (Jeff Daniels), a man in a suit who spends most of the movie delivering exposition to Tris, who still seems incapable of registering any human-like reactions to her constantly changing circumstances. Nonetheless, she does take advantage of her sudden access to a bigger wardrobe.

As with the Hunger Games franchise, what could have – should have – been the final film in the series is merely part 1 of an artificially extended play-off. (Twilight and Harry Potter did the same thing.)

As usual the digital optics are impressive – the vision of large, derelict structures half-buried in the ground seems a favourite background motif in many blockbusters these days – but the story-telling is as lazy as ever.

Even as fodder for fans the first few minutes are hard to take, with almost too many holes and inconsistencies to keep track of. It’s another example of the kind of careless storytelling we get with post-content cinema, where narrative principles of logic and believability simply don’t rate.

Dancer on the Roof: Mack is one of the talented school kids featured in the beautiful doco Wide Open Sky.

Following four especially gifted kids, the film is an uplifting, positive essay about the power of music and the importance of getting children to understand the obligation they have to fulfil their potential.

The strain that arts funding is under, especially in outback schools, could have been gone into a tad more, given the danger it poses to the future of such worthwhile, community-minded projects.

This really is a delightful film, made doubly so if you happen to be seeking refuge from the blizzard of visual effects and soulless storytelling presently laying waste in the multiplexes.