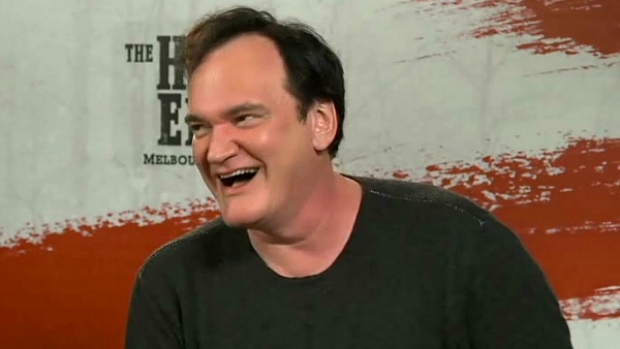 Having built his formidable reputation as a crime action movie maker with hit films such as Reservoir Dogs, Jackie Brown, Kill Bill and the culture-shifting Pulp Fiction, Quentin Tarantino entered the most successful phase of his career with two massive hits – Inglorious Bastards and Django Unchained.

An old-school filmmaker at heart, this success gave him the license to indulge two of his deepest passions: westerns and 70mm film.

The Hateful Eight is a typically dialogue-driven film from Tarantino, a mystery set just after the American Civil War in the snow-covered Wild West where a disparate group of characters find themselves stuck together in a large log cabin while a blizzard rages outside.

Chief among them are: bounty hunter John Ruth (Kurt Russell) and his prisoner Daisy Domergue (Jennifer Jason Leigh, who has been nominated for an Oscar for her performance); Major Marquis Warren (Samuel L Jackson), another bounty hunter and an ’emancipated black’; Chris Mannix (Walton Goggins), the new sheriff of the town they’re all headed for; and Confederate General Sanford Smithers (Bruce Dern), who is not very happy that his side lost and that blacks now have their freedom.

Snow Day: Quentin Tarantino on the snowy set of The Hateful Eight.

In this lively face-to-face interview during his lightning tour of Melbourne, Tarantino explains how his western speaks about America’s present problems with race and what his defiant motives were for shooting his eighth film in 70mm.

In a rare moment, Tarantino also addresses his on-going battles with media mistreatment and misrepresentation.

His films often feature scenes of explosive violence. Consequently, Tarantino has been harangued for most of his career with the charge that violence in movies promotes violence in real life, something he flatly rejects.

Nonetheless, the issue dogs him, despite him having made clear countless times that normal people know the difference between the fantasy world of movies and the hard realities of real life.

His exasperation came to a head in his now-famous TV interview with Channel Four. While discussing Django, reporter Krishnan Guru-Murthy persistently asked him about the issue of movie violence to which Tarantino, after an initial response, declared that he’d had enough of answering the same question for the umpteenth time.

‘I’m not biting; I refuse your question,’ he said, emphatically adding that his views on the issue have been the same for 20 years and that ‘if anyone cares what I have to say about it, they can Google me.’

His participation late last year in a protest rally against police brutality saw him being misquoted, and again the violence-in-film issue used against him. Tarantino was accused of being anti-police and that it was rich for a director of violent films to protest violence. Much of this came from the police, who called for a boycott of his films.

As a result of the furore, Tarantino made an appearance in November on ABC’s The View to clarify – or, rather, re-clarify – his views, that saying there was a problem with police brutality in America was not equivalent to saying that all cops were bad. ‘I’m not anti-police,’ he had to state unambiguously, even though he had never implied that he had.

You will see in the interview how Tarantino gave us extra time so he could fully address this important issue of media mistreatment.

We then sneaked in some extra questions.

Footnote: After our interview we crossed paths with Tarantino in the hotel corridor as he was heading for lunch. As we shook hands it was quickly explained to him that no question was asked about his supposed plan to retire from filmmaking after his tenth film because, well, absolutely nobody takes it seriously.

He let out a huge laugh.

To view a trailer for The Hateful Eight, click here: