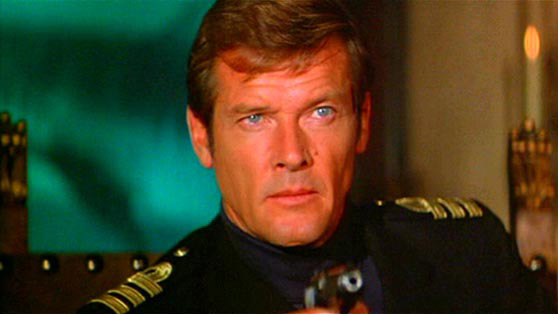 The man who played James Bond longer than anyone else, Roger Moore, has passed away, age 89. Though Sean Connery is credited as the best Bond – an arguable point – it was Moore who headlined the franchise across seven films.

He helped it survive the rise of the wide release blockbuster in the 1970s (Jaws; Star Wars; Close Encounters) and brought Bond into the high-tech, series-minded mindset of the 1980s.

Distinguishing their styles, Connery once famously told Time magazine how “Roger comes in the humor door, and I go out it”. Moore’s lightness of touch was certainly a distinguishing feature of his Bond style, which he merrily lampooned in the 1981 comedy The Cannonball Run, in which he played somebody who thought he was Roger Moore.

Among Moore’s other notable credits are: The Saint; The Persuaders; Shout at the Devil; Maverick and Ivanhoe.

Moore’s passing will doubtless be one of the saddest and most deeply felt of 2017.

In what is likely to be a well-meaning, if questionable act of positive discrimination, Nicole Kidman has decided to address the issue of gender imbalance personally by vowing to work with a female director every 18 months, come hell or high water. In Cannes to promote her latest film The Beguiled, directed by Sofia Coppola, Kidman stated: “We, as women, have to support female directors. Hopefully it will change over time, but everybody keeps saying ‘oh it’s so different now, oh it’s so different now’, and it isn’t.”

Certainly a quick glace over her extensive CV shows she’s only worked with a few female directors – most notably Jane Campion, Kim Farrant and Mimi Leder – so it’s easy to understand her frustration.

That said, what if there’s nothing good on offer when the time comes? Will she do a mediocre film regardless of a better offer on a better film, just to give a fellow female a directing job?

Kidman has taken lots of risks over her chequered career. We shall now see what happens should quality and commitment collide.

While in Australia to promote his upcoming film The Mummy, mega-super-movie star and occasional actor Tom Cruise confirmed on Channel Seven’s Sunrise that the long pondered about sequel to Top Gun is “definitely happening”. The news spread across the internet at lightning speed and has caused much excitement, especially – one imagines – in the halls of the Trump White House where the idea of a major Red State film by the world’s biggest movie star about the might of American air power pounding Middle Eastern bad guys is almost too delicious to contemplate for more than five minutes at a time.

…and for those who missed them, here are the Cheat Sheet items from last week.

With the stench of the global ransomware cyber attack still thick in the ether comes disturbing word of a similar attack on Disney. Hackers claim to have obtained a major title, which they will release in five-minute segments, if their extortion demands are not met. To his credit, Disney head Bob Iger has said the studio isn’t playing. The three biggest films on Disney’s release schedule at the minute are Pirates of the Carribean 5, Cars 3 and Star Wars VIII: The Last Jedi, so some big bananas are at stake (provided, of course, that the threat is genuine).

Hopefully the studio will stand firm in what has turned into a game of bluff and counter- bluff. The extortionists behind this major felony had better hope that their secret identity is secure because should they be discovered – yeow! – they’ll surely be made an example of for the sake of others thinking of doing the sae thing.

They also better be praying that enough people want to join them in their enterprise by watching their stolen product in such numbers it has a marked effect on box office. It’s always been questionable what the bottom line effect of piracy is.

Seeing the illegally released film would also involve downloading at least a dozen items, then editing them together and reuploading.

Yes, it only takes one dedicated sod to do this, but there are also people who, driven either by righteousness or sheer mischief, would likely download the product, attach a virus, then re-upload it so that whoever clicks “download now” gets a little present that stuffs up their computer.

NETFLIX PUSHES BACK AT CANNES

The move by the Cannes Film Festival to demand that all films entered for competition be released in France has resulted in a pretty aggressive, and admirable response from Netflix, the streaming behemoth that prompted the change.

Background: The two films the studio has in competition – Okja and The Meyerowitz Stories – raised many hackles among Cannes purists because the films were only to be streamed, not screened, in France (though Okja was released theatrically in the US, UK and South Korea). Netflix also likes to release its cinema movies online at the same time, whereas in France you need to wait three years.

All this was seen by the Cannes brigade as a threat to tradition and a grind against, for want of a better term, ‘pure cinema’. So from next year films in competition need to have distribution deals in France locked in to be eligible.

The pushback from Netflix has been simple: get with the times. “Historically many films get into Cannes with no distribution at all, ” said Netflix chief content officer Ted Sarandos (as reported by The Jakarta Post), adding that Cannes, and festivals in general, needed to adapt to a changing movie world.

It’s a fair and reasonable point. The bottom line is the quality of the films, not the platform on which they are delivered. That’s a technicality. If Netflix is producing films that are deemed, by Cannes, to be good enough to qualify for competition – as Okja and The Meyerowitz Stories were – then that is surely what matters and is what should be encouraged.

With the quality of movies and TV shows being made by streaming services so high, and given the calibre of talent they draw, it’s inevitable that Cannes has to change. For the time shall come, probably sooner rather than later, when a French director makes a brilliant film for a streaming service.

And it’s hard to see the French shutting the door on one of their own.

Casting News: Fresh from getting wet in Baywatch comes word that former teen heart-throb Zac Efron (High School Musical) will star in an indie film about serial killer Teed Bundy. With the clumsy title Extremely Wicked, Shockingly Evil and Vile, the film will look at Bundy’s relationship with his girlfriend. That role has yet to be cast, but what’s Vanessa Hudgens, Efron’s squeeze from HSM, up to right now?

Like Daniel Radcliffe with Harry Potter, Efron has done a great job escaping typecasting by doing a wide range of films, including Bad Neighbours, Charlie St Cloud, The Lucky One, Dirty Grandpa (opposite Robert De Niro) and Me and Orson Welles.

Esteemed American character actor Powers Boothe has died, age 68. Among his best-known works are: The Avengers; Sin City; Frailty; Tombstone; Nixon; Red Dawn; Nashville; 24; S.H.I.E.L.D; and the TV film Guyana Tragedy: The Story of Jim Jones, for which he won an Emmy in 1980.

Hollywood also lost one its most industrious film and TV producers in Brad Grey, who died age 59, from cancer. He ran Paramount studios for 12 years. Among his film credits are: The Departed; Transformers, Charlie and the Chocolate Factory; Star Trek, The Wedding Singer; The Cable Guy; Mission: Impossible; Paranormal Activity; Jackass. For TV he made: The Larry Sanders Show; The Sopranos; Real Time with Bill Maher, Newsradio; and Just Shoot Me.

AMY VS ALIENS FOR TOP SPOT

The latest serving from the seemingly endless Alien franchise Alien: Covenant only just managed to nudge Amy Shumer from taking out #1 with its opening weekend haul of $2.9 million on 310 screens. Amy’s latest bad girl comedy Snatched still did very well, taking $2.14m on 319. The documentary I Am Heath Ledger (#10) took a strong $152,280 on 42 screens while there was a sense of a quick end to the release of the drama The Sense Of An Ending (#22), which opened with a hopeless $21,070 on 42 screens. That breaks down to $502 per screen, meaning the film played mostly to empty seats.