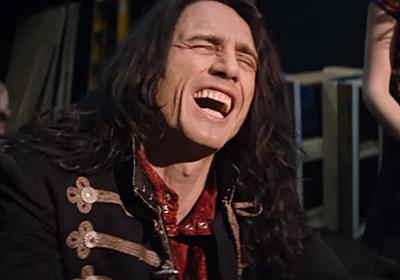 Though Tommy Wiseau’s 2003 independent film The Room is not, by any fair measure, one of the worst films ever made – each year we get $200 million blockbusters that are infinitely worse – the film nonetheless stands tall as a mesmerising Hollywood oddity.

A self-produced, self-written, self-directed, self-financed romantic drama starring Wiseau, its clunky editing, bizarre tonal shifts and poor direction have earned it a huge cult following, both in the real world and in the bubble of Hollywood, where many high-profile talents have fallen for its strange allure.

Thus it was only a matter of time before one of the film’s fans paid proper tribute by making a film about the film, and it’s actor/director James Franco (127 Hours) who has bravely stepped up to the plate.

Based on the book The Disaster Artist by one of the film’s actors Greg Sestero, the film side-steps the temptation to mock or satirise and instead delivers a sincere story about one man’s deep passion for cinema and how the desire to create and succeed can be so strong it can overwhelm a complete lack of talent.

The film follows the travails of Wiseau (Franco) and Sestero (played by Franco’s brother Dave) as they head to Hollwood to make their dreams of big-screen success come true.

While Sestero finds some foothold, Wiseau keeps striking out and so decides boldly to make his own movie with his own money.

Picking his cast and crew with astonishing abandon – apparently if you turned up you got a job – Wiseau ends up wrestling with everybody, including himself, over his fuzzy vision for the film.

As with Tim Burton’s magnificent 1994 film Ed Wood, which paid tribute to the director of Plan 9 From Outer Space – another film that does not deserve its reputation as one of the worst ever made – The Disaster Artist champions the value of persistence in the face of all odds.

It also argues, quite passionately, how passion is a more admirable quality than talent and how a film that is so bad it actually entertains can be taken as a measure of genuine success, however unexpected or bizarre its form.

Full of funny insights into the filmmaking process, Franco proves himself a fine director here and his wise, difficult decision to play Wiseau as a frustrated artist rather than as a clown results in a convincing performance as the mysterious auteur – whose wealth and origins keep everyone guessing – and it’s likely to attract attention come awards time. You really do end up beleiving in the guy as much as he clearly believed in himself.

Based on the real story of a cluster of American firefighters called the Granite Mountain Hotshots, this sturdy, fact-based, action-driven film dutifully serves as an entertaining tribute both to the men who lost their lives in 2013 fighting fires in Arizona and to American cinema’s adrenalised ability in the 21st Century to celebrate and process its heroes on screen with remarkable speed.

Barely, it seems, are they out of the headlines before the movie appears, with recent examples including Captain Phillips, Sully, American Sniper, Patriots Day and Zero Dark Thirty.

The film also reflects America’s long-standing love affair with its emergency workers, as seen in The Perfect Storm, Ladder 49, World Trade Centre, The Finest Hours and even The Towering Inferno, the 1975 Irwin Allen classic that is as famous for its fiery spectacle as it is for one treasured scene where fire chief Steve McQueen asks for volunteers for a dangerous job and sees all his men step forward.

With all due gruffness and likeable, modest machismo, Josh Brolin plays Eric Marsh, who leads a dedicated team desperate for promotion so they can fight fires on the front line. Director Joseph Kosinski (Tron: Legacy) strikes a good balance between homefront drama, as Marsh tussles with his wife Jennifer Connelly, and high-stakes action as his crew fight the flames, with Miles Teller (Whiplash) chiming in with fine supporting work as a renegade who embraces this chance to prove himself.

Kosinski is well-schooled in visual effects and it is difficult to tell how many of the film’s impressive, ultra-realistic wild fires  were staged practically and how many were conjured through digital wizardry. The actors certainly appear to be face-to-face with the real thing.

In paying tribue to its own heroes the film also serves to highlight the dearth of such films in Australia. It’s not as though there aren’t similar heroes to celebrate, yet the persistence of cultural cringe – something that should have died decades ago – seems to prevent local filmmakers from producing films such as Only the Brave.

Successful young businessman Jacob Harlon (Nikolaj Coster-Waldau from Game of Thrones) ends up in prison after an horrific car accident kills his partner. The story of his transformation from vulnerable newbie to exercise yard heavy run parallel to his post-prison life where he tries protecting his long-suffering wife (Lake Bell) from his on-going criminal enterprises. Written and directed by Ric Roman Waugh (Snitch; Felon), it’s a tightly packed, top-shelf crime drama with a great cast that includes Jon Bernthal (Wolf of Wall Street) and Jeffrey Donovan (Burn Notice). The time-shifting is done smoothly and effectively as Harlon is slowly seduced into the criminal mindset with the help of racist inmates who demand a high price in return for their allegiance. And be warned: when the violence hits in this film, it hits hard.

As this fanciful, semi-fictionalised account has it, during a lull in his career when his book sales were down, Dickens struggled with his own demons to forge the classic tale of A Christmas Carol, with its characters springing forth from his imagination and inhabiting his writing room.

Bharat Nalluri is one of Britain’s most successful directors having been the driving force on such acclaimed TV shows as Life on Mars, Spooks and Hustle, which he also created. He took some time out to chat via Skype about The Man Who Invented Christmas, his career and the state Britain is in as we head into Christmas 2017.

From the faith-based division of Sony comes a likeable, faith-based, modest little animated treat that retells the birth of Jesus Christ from the point of view of their donkey.

It’s easily the most slapstick version of the Nativity story ever made – seen with a preview audience of kids & parents, pretty much everybody laughed on cue to every visual joke – and one that finally pays tribute to the critical part played by all the talking animals at the manger on that night.

Oprah Winfrey and Tyler Perry provided voices, and Mariah Carey sings the titular song. This is a very good family film that wisely puts the comedy before the messaging, and a perfect film for those who feel the spirit of Christmas slipping away.

The 7TH AACTA Awards bash is on this week and it’s a thin line-up, folks.

The world-beating, Oscar-nominated Lion is the clear front-runner in a small field of films that, as usual, most of the public have barely heard about, if at all.

Among the main players: Ben Young’s Hounds of Love, an excellent thriller that got too little attention; Kate Shortland’s Berlin Syndrome, a tepid, overly mannered thriller that took too long to do too little; Rachel Perkins’ Jasper Jones adaptation, a clunky film that found a sizeable audience; and Ali’s Wedding, an abomination that tried packaging the oppression of women as a cute rom-com.

The clumsy organisation of the awards sees the announcement of winners split, with the “big ones” reserved for the televised event on Wednesday.

This doesn’t exactly leave a lot of suspense about what film will win the major ones, with Lion odds-on to take doorstops for best film, director, actor, supporting actor & actress, while Emma Booth is likely to take best actress for her astounding work in Hounds of Love.

Sadly, and as everybody knows, the entire event will be overshadowed by the on-going saga regarding the unnamed person who has made an ill-defined allegation against Oscar-winning actor/producer Geoffrey Rush over something he allegedly did during the theatrical run of the Sydney Theatre Company’s King Lear back in 2015/16.

The whole thing’s been a circus of smear with Rush enduring nearly a week of negative stories and innuendo, including a bold Twitter statement from Greens Senator Sarah Hanson-Young who somehow equates Geoffrey Rush’s situation with that of Don Burke.

Out of respect to his colleagues, Rush has resigned from his position as president of the academy, thus making it unlikely that he’ll be in attendance at the soiree or take part in the presentations. In any case, there’ll be an elephant in the room the size of the Hindenburg. Unless somebody is brave enough to address it.

It’s all a hideous spectacle. There was a time when proof was a thing. Now, however, it appears the mere suggestion of impropriety from an unnamed source can be allowed to gain as much media traction as possible while the accuser remains protected.

It’s as though we’re living in the world of The Trial by Franz Kafka. Hey, now there’s an idea for a film.