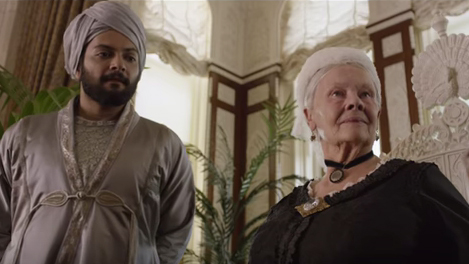 In her second go at Queen Victoria – she first did her in 1997’s Her Majesty, Mrs Brown – the ever-reliable Judi Dench hits another Oscar-bound homer as the dame in her latter years where she finds herself fighting off dotage and boredom in equal measure while also ruling much of the world, including a little place called India.

While being presented with tributes from there, she catches the eye of handsome servant Abdul (Ali Fazal) and so makes him, and his friend Mohammed (Adeel Akhtar), part of her court. She quickly finds Abdul a good listener, drawing him in closer than the questionable members of her own family.

This the other royals – including Bertie, the Prince of Wales (a nicely etched turn in nastiness from Eddie Izzard) – resent deeply, and frustrations grow with each pleasantry, private chat and gift shared between the two. Victoria’s fascination for his far-off land and its culture is not matched with the requisite air of superiority.

With Dench and the film’s heritage-listed locations dressed up in all their magnificent, photogenic period finery the movie looks as pretty as Gurinder Chadha’s India-themed The Viceroy’s House, and carries a similar theme about cultural tolerance, only here it’s much more rose-coloured and family friendly.

Based on a true story uncovered only recently in 2010 and guided by the sure hand of veteran British director Stephen Frears (The Queen; Philomena), the film is a pleasant valentine to the notion of nations getting along, however distant a dream that might seem at the moment.

Check out our interview with director Stephen Frears at the end of this article:

The new film adaptation of Stephen King’s horror classic It has proved a huge hit at the box office, and rightly so. Now comes a horror story of a completely different hue with Darren Aronofsky’s extraordinary Mother!.

Set in a large, remote, tranquil country house, Jennifer Lawrence plays wife to Javier Bardem’s blocked writer who, for inspiration’s sake, allows a local doctor (Ed Harris) to stay with them. He doesn’t ask her.

They’re soon joined by a slovenly, nosy Michelle Pfeiffer (in great form) who has no sense of personal space or privacy and before you can say “intruder alert” JLaw’s desire for a bit of peace and quiet as she renovates her home becomes increasingly impossible.

To reveal any more would be unjust to a jagged, surreal, superbly shocking movie that rates as one of the best attempts yet to capture on film what a nightmare is really like.

Aronofsky, who also wrote the screenplay, nails five of the common qualities nightmares share: there’s that sense of powerlessness; of chaos that follows a weird logic; of violation; of startling lucidity; and, of course, the sense that you are totally trapped in something that has no end.

With great performances from its cast, especially Lawrence – if ever there was a prime example of a young actress putting it all out there, it’s this – the film is a rollercoaster ride that begins with a standing start before slowly gathering pace and accelarating to a blistering pitch.

It’s easily one of the scariest and most entertaining films of 2017. Given the formulaic nature of so much multiplex fodder today and our constant pleas for mainstream Hollywood to cough up something different, Mother! comes along as a welcome antidote, a satisfying journey to the edge of madness.

Most enjoyable of all is the tantilising after-taste the film leaves you with as you replay parts of the movie in your head and wonder “what did it mean?”

Brace yourselves. Here’s a straight-up, straight-faced, knockout action film with a topical edge and a newly minted hero borne out of a hatred for Islamic terrorism and with the whiplash appeal of Jason Bourne crossed with Jack Ryan.

After surviving a massacre that claims a loved one, Mitch Rapp (Dylan O’Brien from Maze Runner) swears vengeance and is promptly recruited by the CIA to join a team lead by a veteran hardass (a very convincing Michael Keaton) to intercept the construction of a nuclear bomb in a Rome basement.

After Atomic Blonde and The Hitman’s Assassin, this terrifically paced, proficiently mounted outing is our third generous serving of high-quality action in rapid succession.

It boasts two chief points of difference: a refreshingly straight-forward plot involving a rogue American agent (Taylor Kitsch) and a gang of bad guys happy to burn millions of innocent people in the name of their crusade; and an absolutely fabulous action finale that ranks as one of the most thrilling we’ve seen in, well, weeks. It involves a nuke – and you’ll never guess what happens.

The proceedings are very nimbly directed by Michael Cuesta (Kill the Messenger), who cut his teeth on A-grade shows such as Homeland, Six Feet Under, Blue Bloods and Dexter and who brings a Bourne-like veracity to the franitic chases and close-quarters fighting.

What a fine, funny, family-friendly film The Emoji Movie is. Full of bright characters, one liners and gorgeous animation, it’s the latest brand-filled kids’ cartoon to drop off the end of the lucrative Hollywood animation assembly line.

We shed our long-cherished anxiety over product placement decades ago when Pixar ushered in the idea of turning everyday household items into lovable characters, and thus today we happily consume Lego movies that are all product placement in one gulp. So there’s no issue finding delight in a film set in the overly familiar world of our phone screens, where brand names loom large.

But, hey. Isn’t this film supposed to be a massive stinker?

Yes, yes, every cynic and their dog rolled their eyes when the news first came through that somebosy was planning to make a children’s adventure movie about the emojis we use when punctuating text messages on our iPhones.

And why not?, people fumed with venomous sarcasm. After all, if they could somehow make a whole movie based on Angry Birds, why not one about emojis? It’s just another sign of Hollywood’s dearth of originality. Maybe they’ll make an app for that. Yuk yuk.

So the knives were already sharpened and ready for this film’s release, and no surprise it’s been hated on by critics from here to there. Some have even called the film evil.

Yet, in the face of all this hatred, The Emoji Movie turns out to be very good, very funny, gorgeous to look at and full of clever ideas.

Clearly inspired by Toy Story – the film’s director Tony Leondis (Igor) admits as much – the movie in set entirely inside a kid’s iPhone and tells the story of Meh (TJ Miller), an emoji who is supposed to register indifference to everything.

Trouble is, Meh can’t conform in a world with such strictures, much as he tries. He feels that he must be reprogrammed and thus goes on an adventure in search of a hacker who will help him become “normal”.

The film carries all the usual kid-movie messages about being yourself, defying peer pressure, facing adversity and not conforming to stereotypes – a pretty healthy value diet, surely – along with some neat, not-too-sharp satirical jabs at iPhone culture as kids walk about with their eyes fixed on their screens, bumping into each other and so forth.

In terms of sheer imagination, it’s pretty impressive how Leondis has taken the existing concept of the iPhone and back-engineered it to create a world within the device, with each app being its own realm through which Meh and his friends travel.

Taking something so abstract and giving it wonderful animated form like this is a greatly under-appreciated art in Hollywood.

The film is unlikely to get any Oscar attention, which is unfair, for while there are awards for best screenplays that are adapted from a literary source, none exist for screenplays adapted from inanimate objects, such as a digital device. Why not? There really should be a special award to recognise stuff like this because it can certainly be tougher and take more creative effort than adapting a famous book.

In any case, The Emoji Movie appears to be having the last laugh. Despite its near-universal drubbing, the $50m film has taken more than $170m worldwide, which makes it a very comfortable success…and yet another sign of the growing chasm between critical consensus and public opinion.

Now as promised, the interview with Stephen Frears, Director, Victoria and Abdul.