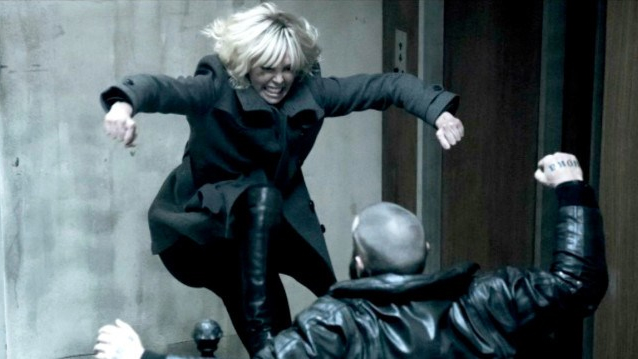 ATOMIC BLONDE ***1/2 (115 minutes) MA
After being the only interesting thing in Mad Max: Fury Road and giving the Fast & Furious crew a run for their money in F8 Charlize Theron here consolidates her position as cinema’s most dangerous action movie female. (And let’s never forget the honourable turn she did as Aeon Flux back in 2005.)
Set in the blue-filtered Cold War era, Theron plays a British agent tasked with locating an invaluable list of double agents. This involves messing with a semi-psycho James McAvoy (a very comfortable fit since Split) and a plot that puts her at the centre of a lot of marvellously choreographed fighting and gunplay.
As if to set new benchmark for gritty, post-Bourne action realism, one remarkable sequence involves her in an extended close quarters fight that involves fists, feet, guns and a car chase, all brilliantly mounted to look as though it was filmed in one take (something that would have been physically impossible).
The plot does take a little while to get into gear, but once it kicks in the action comes loud and fast. McAvoy makes a great foil but it’s top-shelf British character actor Eddie Marsan who puts in the best support.

THE BIG SICK ***1/2 (120 minutes) M
In a highly likeable, self-consciously topical non-formulaic romantic comedy, rising American Kumail Nanjiani plays a struggling stand-up comic who falls for a white girl (Zoe Kazan).
This, of course, flies in the face of his loving Pakistani parents who keep trying to set him up in an arranged marriage by having girls “suddenly” pop in during dinner.
Things turn when a medical tragedy strikes, bringing the girl’s parents into the picture. They’re played by Holly Hunter and Ray Romano, and what a difference they make taking on full-blooded three-dimensional characters rather than the cardboard comic relief we’re used to.
Co-written with his wife Emily V. Gordon based loosely on their experience, Nanjiani rather bravely confronts the issue of cultural assimilation of Muslims in America, with one moment trumpeting freedom of choice so loudly you can almost hear Norman Rockwell applauding.
Directed by Michael Showalter (Hello, My Name is Doris) and produced by Judd Apatow, the film does push against most of the easy rom-com cliches to deliver a satisfying adult comedy. One value it does share with most American comedies is how its veneer of humour packages a set of values that are chiefly conservative and very American.
To actually hear the main character say how Islam might have worked for parents but isn’t necessarily the answer for him is as inflammatory as some of the jokes he drops about Muslim stereotypes. Such touches of bravery are always welcome in films that could otherwise have been so predictable and safe.

FILM FESTIVAL HIGHLIGHTS
The 66th Melbourne International Film Festival is in full flight and shall be until 20 August. Seriously, what better way to stay warm in winter than to snuggle up with a good film? To kick off, here are a few film festival picks, with more to come. Enjoy!

A GRAY STATE
At some point in making his deeply political action movie Gray State, director David Crowley lost the plot. A veteran of the Iraq war his passion and focus slowly gave way to an insular state of mind that lead to a sudden, bloody tragedy. Using lots of unsettling video diary material, this extraordinary documentary tries hard to nail what happened to Crowley and his family, raising some disturbing questions that have even more disturbing answers.
Screens: Monday 7 August, 9pm, Comedy Theatre; Saturday 19 August, 9pm, Hoyts

AUSTERLITZ
Likely to be one of the most bizarre Holocaust documentaries you ever see, director Sergei Loznitsa visits Auschwitz and trains his camera on the crowds that flock to see the remnants of the Nazi death camp and the memorials that have been erected to the murdered. Clearly inspired by the great American observational documentarian Frederick Wiseman, Loznitsa shoots in long, still takes and in black and white as people walk through gates and doorways, photograph buildings and inspect monuments. The compositions often seem carefully selected. One young woman inspecting an unseen exhibit is almost moved to tears while a man in the background wrestles with his map. The only commentary is what is overheard by tourists and tour guides. It’s a quietly absorbing tract with no intended message, other than to show how popular the place is, how respectful the tone is and how young many of the visitors are.
Screens: Monday 7 August, 9.15pm, ACMI; Sunday 20 August, 1.45pm, Kino

PACMEN
Gun local documentary maker Luke Walker offers an outstanding insiders look at the presidential campaign of Dr Ben Carson, who tended to inhabit the opposite end of the popularity polls to Donald Trump. Walker somehow gains extraordinary access to the offices of high-powered officials and the work rooms of lowly volunteers, each one of them possessing a belief in their candidate that is  undaunted by a rapidly changing reality. It’s great to see a political documentary from a loser’s point of view, and this film makes a good companion piece to The War Room, which chronicled Bill Clinton’s ascent to the White House.
Screens: Sunday 6 August, 6.30pm, Hoyts Melbourne Central; Monday 14 August, 9pm, ACMI

JUNGLE
Wolf Creek director Greg McLean comes up trumps with a knockout survival film about four guys who get lost in the beautiful but dangerous Bolivian jungle. Starring Daniel Radcliffe as Yossi Ghinsberg, on whose book the film is based, the film is absolutely straightforward with virtually no plot other than to make it out alive. McLean builds tension incrementally as the friendships that initially bind the quartet begin to fray and the adventure ferments into a nightmare. Terrific stuff.
Screens: Friday 11 Aug, 6.30pm, Hoyts Melbourne Central; Thursday 17 August 9.30pm, Comedy Theatre; Sunday 20 August, 4pm, Kino