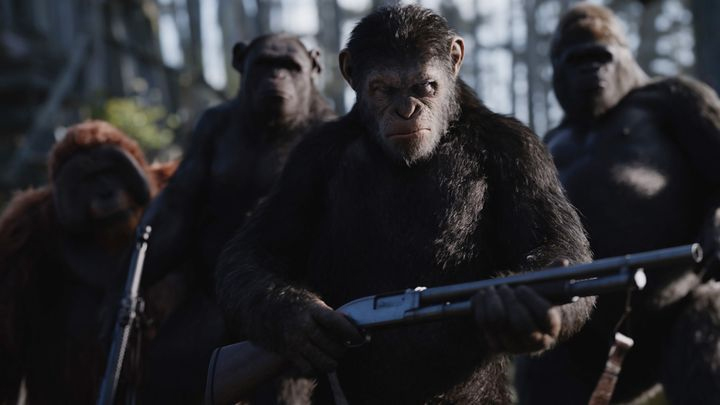 PHOTO: Hail, Caesar: The apes are on for a final showdown in the fabulous War for the Planet of the Apes.

The stirring finale of this outstanding reboot of the classic film series has Caesar (Andy Sirkis) confronting a genocidal, ape-hating colonel (Woody Harrelson), who leads a renegade band of similarly minded soldiers.

Despite a show of mercy after an initial confrontation, Caesar is left in no doubt about the lethal determination hard-wired into these soldiers and so embarks on a once-and-for-all show down.

Director Matt Reeves (Cloverfield; Let Me In), who directed 2014’s Dawn of the Planet of the Apes – the first in the trilogy, 2011’s Rise of the Planet of the Apes, was very ably helmed by Rupert Wyatt – delivers an exciting, moving closing chapter that again punches the central thesis of the series, that humans have no inherent right to presume dominion over the earth.

The first great thing about the series is how intelligently it has prosecuted that concept, stripping humans of their arrogance by wiping out most of them through a man-made virus and giving apes comparable, if more innocent,  intelligence. We often complain about the pointlessness of reboots and sequels unless new ideas are brought to bear. The Apes series is a prime example of how to do it right.

The other great thing we need to give thanks for is the extraordinary leaps the films have achieved with motion capture technology, where the body and facial movements of actors are transposed into digitally rendered primates.

After the advent of Gollum in Lord of the Rings and the giant ape in King Kong – courtesy of Kiwi director Peter Jackson and his team at the world-beating FX house Weta – these films have successively lifted the bar on just how believable and photo-realistic computer generated beings can be.

Caesar is in for a much more emotional ride in this film, as are his fellow apes, and so convincing and touching are their performances that you have to occasionally remind yourself of how remarkable these scenes are, that what you are watching is the next step in the evolution of visual effects.

They certainly deserve a special Oscar for such breakthrough achievements, which would be fitting redress for the fact that they’ve only been nominated so far. There certainly is an argument now to formally recognise “best digital acting”.

The only problem would be that you couldn’t just give it to the actor, you’d need to recognise all the digital artists involved. The question then becomes whether the Oscar stage is big enough to hold the hundreds of painstaking people responsible for bringing the actor’s movements to life.

The tortured rage of a 12-year old boy – his mum is dying; he’s bullied at school; he has no self esteem – results in recurring nightmares in which a nearby tree to his home in rural England transforms into a giant, gnarled beast that at first terrorizes then advises him.

Voiced by Liam Neeson and looking like the giant son of Treebeard (the walking tree from Lord of the Rings 2), the monster gives the angst of sullen Conor O’Malley (Lewis MacDougall, from Pan) form, structure and, most importantly, a strategy to cope with his ailing mother (Rogue One’s Felicity Jones), pushy but well-meaning grandmother (Sigourney Weaver in a lovely, accented turn) and school bully Harry (James Melville).

The philosophical beast treats Conor to three stories, the lessons of which initially confuse him because they refuse to follow clear moral lines of right and wrong. Eventually things fall into place but only after he summons the courage to face down his fears.

Based on the best-selling young adult book by Patrick Ness (who wrote the screenplay and executive produced), Spanish director J.A. Bayonas (The Impossible; The Orphanage) presides over a mature-minded fantasy adventure that has something more on its mind than impressive visuals and pyrotechnic displays.

With its themes of loss, acceptance and self-respect so well dispatched amidst all the beautiful imagery – including some marvellously haunting animation akin to what we saw in Harry Potter and the Half-Blood Prince – and action, A Monster Calls chimes in as a treat for the thinking teen.

To its credit, it really punches the very topical point about how some young people have no choice but to grow up quicker than their hormones dictate.

It’s often said when discussing how talent within a family passes from one member to another how the “fruit doesn’t fall very far from the tree”. Unfortunately that doesn’t appear to be the case in the Coppola clan.

For while director Francis Ford Coppola is easily one of the filmmaking geniuses of our time, the same – or anything close to the same – can’t be said for his daughter or his wife.

We saw just last week with The Beguiled how daughter Sofia doesn’t quite share the passion or drive of her father. Indeed, by the time Coppola senior was his daughter’s current age of 46, he’d made the first two Godfathers, The Conversation, Apocalypse Now, The Outsiders, One from the Heart and many others.

Now we have his wife Eleanor logging in with her first ever feature film, Paris Can Wait, a slighter-than-slight comedy of manners that involves the wife (Diane Lane) of a film executive (Alec Baldwin) taking a road trip with a slightly greasy business partner (Arnaud Viard) from Cannes to Paris.

While she’s anxious to get there as soon as possible, he’s far more relaxed, wanting to show her the sights and sample as much food and wine along the way as the can.

He, of course, wants to seduce her and she, of course, would dearly like to knee him in the jewels, only she needs him to drive. And that’s one thing the film lacks. There’s no plot, and the string of vignettes as they eat, picnic and see the sights are mostly boring.

The scenery is very pretty, but the constant reminders from the French guy about how Americans are always in a hurry and should enjoy life more the way the French do make you want to reach into the screen and hit him over the head with a cheese platter. He is a really irritating, witless, charmless character.

Eleanor Coppola, who made the brilliant documentary Hearts of Darkness about the making of Apocalypse Now, has said how this film was inspired by a real incident.

It really does make you wonder: wow, you’ve lived so long with such a prolific and brilliant director and this is the “event” that inspired you to make your first feature film? One would have thought she could have found something just a tad more engaging than a road trip with some ageing lothario with a big mouth and no sense of direction.