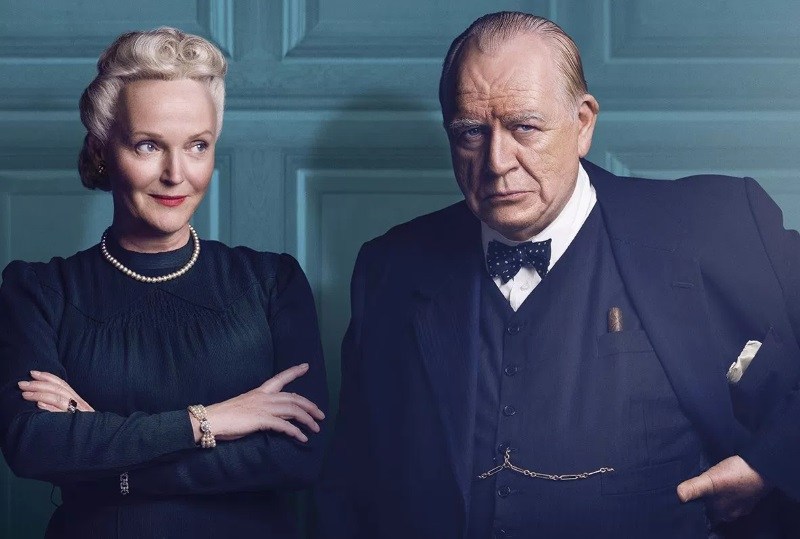 CHURCHILL *** (105 minutes) M
Though he is commonly regarded as one of the most important politicians of the 20th century, Jonathan Teplitzky’s fine profile of Britain’s wartime leader Winston Churchill casts him as a largely impotent man whose objections to the plans for the D-Day invasion had no real traction.

Brian Cox does a detailed job as “Winnie”, showing how his gruff exterior as the British Bulldog who lead his nation against the might of Hitler was matched by self doubts and a constant need for external approval.

Cox is the latest quality actor to step into Churchill’s boots – Albert Finney, John Lithgow, Brendan Gleeson and Rod Taylor are just a few who have given it a go – though the degree to which the events here have been fictionalised (made clear by a statement in the end credits) is evident by how much hair the famously bald icon has in the film.

With strong support from Mad Men’s John Slattery as Supreme Allied commander Eisenhower and Miranda Richardson as Churchill’s wife Clementine, Teplitzky (the Aussie whose works include: The Railway Man; Burning Man; Gettin’ Square) provides a deeply etched portrait of a man forced by duty to rise above his own ego to serve his nation as its moral figurehead. Cox, one of the most gifted character actors around, deserves special kudos for the vulnerability he imbues his Churchill with.

THE MUMMY *** (106 minutes) M
If for no other reason we can at least embrace The Mummy for not out-staying its welcome.

Given its huge task – to ignite a franchise of Universal’s classic ghouls such as Dracula, Frankenstein, Dr Jekyll, The Invisible Man, etc – it dutifully sets things up with wizz-bang efficiency, deploying the requisite mixture of visual effects dazzle, impressive action set-pieces, star power and a dose of ham-fisted movie mythology, something that seems to have become mandatory of late.

Tom Cruise is the mega-star recruited to form the centre around which all the rebooted mayhem swirls. As a cheeky army reconnaissance officer who runs a side business selling antiquities on the black market, he happens upon a hidden Egyptian chamber in Iraq.

In it, the coffin of the evil Princess Ahmanet (a semi-digitised Sofia Boutella) is removed and put upon a cargo plane where her influence begins to take effect, infiltrating the mind of our Tom and causing the plane to crash in England.

The thrust of the plot is that Tom – whose character’s name is Nick but, you know, it’s Tom – is to become the mortal manifestation of evil and join the nasty Princess in her scheme to rule the world. Thus he suffers from mental flashes and a compulsion to run a lot.

Be in no doubt, The Mummy is sufficiently entertaining multiplex fodder, proficently executed on a big scale with some neat signature scenes – the zero-gravity sequence and subsequent plane crash; the chase through London – and enough loud noises to keep you awake.

In a more humourous mode than usual, Cruise speeds through the film with alternating expressions of disbelief and terror until he faces down the dapper Dr Jekyll (Russell Crowe), who has the hardest job in the film with only a few minutes to lay the foundation for the entire franchise before he and Tom hit the mat in a flurry of punches.

Intended as a mass-market film, The Mummy has been subject to some pretty presumptive declarations that it’s a flop. According to industry source Box Office Mojo, the film has taken $174 (AU231) million globally since opening on 9 June, against a principal budget of $125 (AU166)m. Though its estimated domestic take of $32 (AU42)m is a tad soft, any film that makes 140% of its production cost across one weekend is not doing too badly.

Of course, to account for the cost of publicity and saturation marketing you can easily double the budget figure, but it’s still early to be declaring the film a dud. Critics might have hated it, but audience response will be better gauged by the second weekend.

MY COUSIN RACHEL * (105 minutes) M
Here’s a dreadful period drama, adapted from the 1951 novel by Daphne du Maurier, in which Rachel Weisz plays widow Rachel Ashley whose brother-in-law Philip (Sam Claflin from Me Before You) suspects of causing his brother’s untimely death.

The crux of the story has it that he falls for her charm and alters his will to her advantage. Trouble is, the direction by Roger Michell – a fine, versatile journeyman who gave us Venus; Morning Glory; Hyde Park on Hudson; Enduring Love; The Mother; Changing Lanes; and Notting Hill – is terrible, never once convincing us that Rachel has any quality that would lull such a cynic into submission.

The film looks pretty enough but the characterisations are so weak and the plotting so shallow and predictable – there is virtually no ambiguity in the film – you’ll feel like hurling your popcorn at the screen every time Rachel tries looking wistful. Old-schoolers might remember the 1952 Olivia De Havilland film, which was much better.

WHITNEY: CAN I BE ME ***1/2 (105 minutes) M
Controversial documentary director Nick Broomfield (Kurt & Courtney; Biggie & Tupac; Chicken Ranch, etc) changes style by taking him out of the frame to deliver this richly detailed portrait of the rise and tragic fall of Whitney Houston.

Though unauthorised – Kevin Macdonald’s sanctioned Whitney doco comes out later this year – Broomfield had access to rare footage of an unfinished documentary by Rudi Dolezal (one of the producers) that shows Houston at her best and worst.

Far from the tabloid profile of a celebrity trainwreck one might have expected from Broomfield, he takes care to piece together the personal and professional elements that combined to propel her calamitous downfall.

HOTEL COOLGARDIE *** (84 minutes) MA
In an eye-opening, unsettling look at a part of the national character we thought had died off decades ago, two attractive Finnish girls on holiday in Australia are prompted by a robbery to take on jobs as barmaids at a remote Outback hotel.

The behaviours they encounter suggest that time hasn’t touched the place in forty years, despite it having a reliable internet connection.

Director Pete Gleeson manages a remarkable blowfly-on-the-wall effect and it is some minor miracle how the participants signed release forms to allow their antics to be included in the film. The film obviously had no funding from Tourism Australia.
For our interview with director Pete Gleeson please click here: http://tinyurl.com/yc78p3mz

And on DVD & Streaming…

SOLACE ***1/2 (101 minutes) MA
This nifty, stylish serial killer thriller was intended as a sequel-in-kind to Seven as it similarly deals with a murderer who believes there is a moral basis to killing.

Aussie actress Abbie Cornish (Bright Star; Robocop) puts on a convincing American accent as a cop partnered with Jeffrey Dean Morgan (Watchmen) who seek the help of a psychic, played by Anthony Hopkins with that understated, seductive gravitas he has made his own.

Now 79, Hopkins really is a prime example of that rare breed of actor whose magnetic presence can lift a film a few notches. With Colin Farrell also on board, the film boasts a strong cast that makes you wonder why the film bypassed cinemas here.

Brazilian director Afonso Poyart makes his English-language debut here and shows a lot of visual style, with a love of slow motion and flash backs.

DOG EAT DOG **1/2 (89 minutes) R
Blessed be the artist whose work is on a downhill trajectory, for they at least have the satisfaction of knowing they gave the world their best, and though they might have passed their peak, they can still imbue their remaining works with traces of the style that made them great.

That’s the main motive behind wanting to check out Paul Schrader’s black comedy crime lark, in which he pits Nicholas Cage and Willem Dafoe as two mismatched criminals who engage in a violent spot of baby napping.

Things go awry, of course, and the main characters are impossible to warm to, yet the unpredictable pacing and bravura performances by his two leading men, who have each worked on Schrader projects, have a sinister spark.

The dramatic edge he brandished in those films has long since dulled and Dog Eat Dog is nowhere in that league. Still, Schrader peppers the film with stylistic touches that remind you of the dark, playful master he once was.