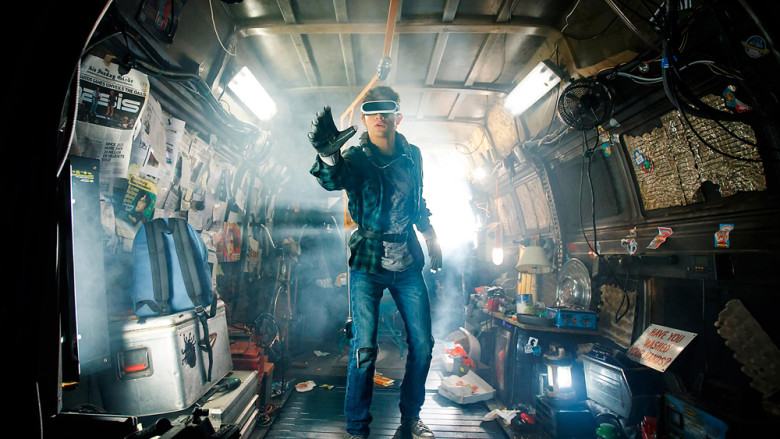 Given the glorious, elongated splashes of high-end spectacle on show here, one could be forgiven for thinking director Steven Spielberg wanted to remind us all that the prestige dramas that populate the latter phase of his career – The Post; Bridge of Spies; Schindler’s List; Lincoln; Munich, etc – hasn’t withered his ability to orchestrate a mass-market crowd-pleaser.

With his signature humanist message embedded in its story, Ready Player One certainly serves as testament to Spielberg’s gift as a pulse-riding, intuitively cinematic entertainer.

A mish-mash of The Matrix, Tron, Blade Runner and Avatar (plus dozens of others), the film is set in 2045 where game-crazy teen Wade Watts (Tye Sheridan) joins a competition to find the hidden keys inside a multi-player game that will grant the winner control of the giant tech empire founded by the game’s inventor (played by Mark Rylance).

Early on there is, one must admit, a slap-dash sameness to some of the visual effects, but once the story involving the evil corporate suit (Ben Mendelsohn) kicks in the ride really accelerates.

Stuffed full of movie references, there’s one knockout sequence where the players enter the set of a classic film. It’s a brilliant piece of movie self-referencing, a highlight in a film full of grandly staged cyber battles and real-world intrigue. And thankfully it’s one of the few long films to warrant its running time.

Lovers of the 1980s will relish the shameless, wholesale plundering of pop culture signposts and everyone will bask in the sheer, instinctive mastery Spielberg weilds when in charge of a vast FX-driven cinematic canvas like this.

Like all of his best “audience” films, Ready Player One is designed to entertain you to saturation point. And, boy, does it.

Whatever magic the presence of a giant Oprah Winfrey was meant to bring to this kid’s fantasy sci-fi extravaganza by Ava DuVernay (Selma) has been lost in a largely antiseptic swirl of visual effects and right-on virtue signalling.

A scientist (Chris Pine) disappears from his suburban home after experimenting with space travel and, years later, a gaggle of kids compiled by the New Hollywood Diversity Codebook go looking for him with the help of three ethereal, shape-shifting beings played by Ope, Mindy Kaling and Reese Witherspoon who, at one point, turns into a serpent that looks like a flying cabbage.

With syrupy sentiment and leaden direction throughout, the film is being heavily sold as an instructive value-driven fantasy for kids between eight and 12. To that should be added that these kids should never have been exposed to the kinds of marvellous fantasy worlds they can see in the cinema or gaming realm, and which makes the ones on offer here seem rather anodyne.

There are, admittedly, some beautifully composed images to behold in this technically attractive film – back in the day, at around the turn of the century,  over-cooked FX-driven fare like this was referred to by the now-archaic term “eye candy” – but while the film looks pretty its moralistic brow-beating makes you wish the film had a more worthy villain than the watery, abstract one on offer here.

Ahh, how heartening to see the spirit of 1980s teen sex comedies continuing to gather strength.

In this lovingly assembled low-brow lark, three nervous parents – Leslie Mann, Ike Barinholtz and a very funny John Cena (a bulked-up wrestler who loves playing against his size) – discover their daughters are planning to lose their virginity on Prom night and so endeavour to stop them.

Formulaic, knockabout comedies like Blockers need to be executed with precision and conviction, especially during the mandatory gross-out scene, and director Kay Cannon (she wrote the Pitch Perfect films; worked on 30 Rock) deserves major backslaps for managing to implant a sincere heart amidst all the raunch and mayhem. Full of big laughs, it’s a great date film for teens and parents alike.

From Britain’s reigning master of political satire Armando Iannucci (The Thick of It; Veep) comes an incredibly funny film about a not-very-funny historical event.

With the leader of the USSR Joseph Stalin near death, his inner circle attempt to prepare for a new era, their efforts distorted and tangled by toxic cross-currents of competing egos, ambitions and agendas.

Blessed with a top-flight ensemble of great character actors who know the art of straight-faced comedy – Michael Palin; Steve Buscemi; Jeffrey Tambor; Rupert Friend; Jason Isaacs; Paddy Considine – Iannucci presides over the increasingly hectic race to put things in place while dealing with the population as it streams into the city.

Of course Stalin was, along with Mao and Hitler, one of the most ghastly tyrants of the 20th century, responsible for the deaths of many millions, including those “enemies of the state” he found inconvenient to deal with.

The film does not make light of these facts, but refers to them mostly through inference. Even the slaughter on the streets as citizens arrive to see Stalin is conveyed verbally, not through scenes of people being mown down by machine guns.

This is a lesson taught through Mel Brooks and his many lampoonings of Hitler, where ironic and straight-out bad taste can highlight horror while ridiculing those responsible.

It’s a lesson Iannucci has clearly absorbed and deploys with great precision, allowing himself the occasional moment of gravitas to really drive home the nature of the regime that dictated life to hundreds of millions of people for decades.

Hard to believe, but we’re this deep into the 21st century and being a gay teen is still a big enough thing to build a “coming out of the closet” comedy around. Seems we’re not as open-minded as we should be by now.

Based on the best-selling book by Becky Albertalli, the film, clumsily directed by Greg Berlanti (Life As We Know It), follows the tale of high schooler Simon (Nick Robinson), who shares the secret that he is gay with us and one anonymous online interlocutor.

As he reveals more of his feelings, he becomes convinced the person he’s communicating with attends his high school.

In a dark turn, his secret is discovered by a so-called friend, who promptly uses it to blackmail Simon into helping him win the affections of a girl.

There’s no questioning the sincerity or the worthy pro-tolerance sentiments of Love, Simon, which no doubt accounts for all the zeitgeist-tapping buzz it’s been getting.

But, whoa, does this film brim with bad direction. Josh Duhamel (who was in Life As We Know It) and Jennifer Garner flounder as Simon’s liberal parents, a self-consciously cool couple who have clearly seen Juno one too many times.

The film’s portrayal of digital technology is also implausibly off-key – the “discovery” scene in the library is full of howlers even baby-boomers will notice – and many of the scenes simply ring false.

For instance, try making sense of the blackmailer’s characrer arc you’ll go nuts. Kudos to the film for championing a good, inclusive message but it sure could have benefitted greatly from a director with a better sense of emotional realism.

Amidst the dust and rock of post-Christ Rome, the pre-apostle Paul (James Faulkner) takes meetings with card-carrying Apostle Luke (Jim Caviezel, aka Jesus from The Passion of the Christ), who sits in an uncomfortable prison cell awaiting an uncertain future.

Paul’s job is to siphon every bit of wisdom he can and, in the process, make amends for the Christian-slaughtering enemy of God he was beforehand.

Made by Sony’s faith-based division Affirm, this largely inert, dramatically sluggish film is a tough sell. Especially irritating are the bland, heavy-browed performances and the mentions of feeding Christians to the lions in the nearby Colosseum, which don’t pay off.

It’s just as well the film is being released at the time of forgiveness, because you’re going to have to do a lot of that to get through it. Chalk this dreary biblical drama up as a worthy companion piece to Mary Magdalene.

The latest from Aardman animation is a visually attractive misfire. A family of crater-dwelling, Cockney-accented cave people encounter an advanced race of humans determined to raze their forest homeland.

The charm of stop-motion animation can’t quite make up for the ultra-weak story premise and flat characters, with four-time Oscar-winning director Nick Park struggling to inject the visual wit we see in Shaun the Sheep and Wallace & Gromit.

Also, a niggling point for adults is why the idea of progress is seen as a negative. If the cave people win the competition they get to reject any improvement in their awful lifestyle. Surely, the cliche of developers and progress as evil has had its day. After all, on balance, civilisation has turned out to be a pretty good thing.