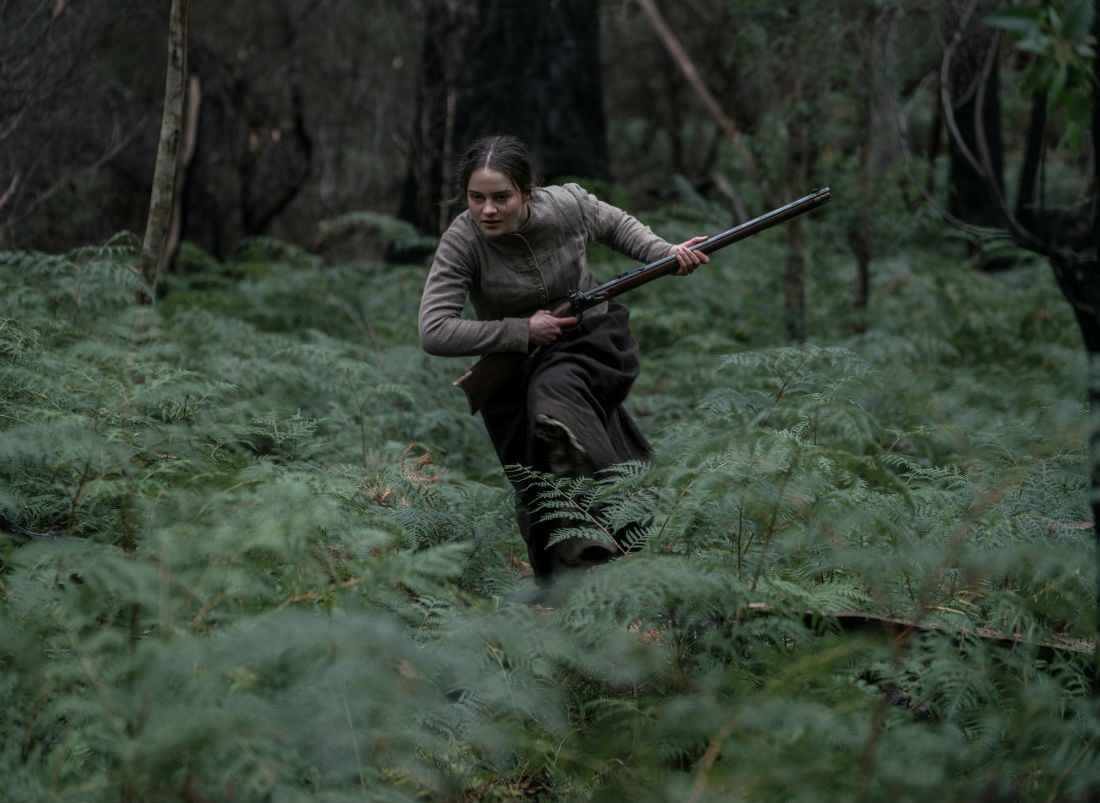 After warming up with her tightly wound 2014 psychological frightfest The Babadook, Australian writer/director Jennifer Kent goes next level with a searing Gothic revenge saga that unspools like the unholy offspring of The Piano and I Spit On Your Grave.

Her colonial tale of Irish lass Clare (Aisling Franciosi) who goes hunting for an evil English officer (Sam Claflin) through the Tasmanian wild is masterful at every turn, with a gripping set-up and a ferocious pay-off that will leave you dumbstruck.

Ensared in the pursuit is Billy (Baykali Ganambarr), a deeply resentful blackfella whose motives for catching the officer are almost as strong and as dark as Clare’s.

There are no punches pulled here. The film contains several moments of extreme violence yet, like Quentin Tarantino, Kent has an uncanny instinct about precisely how much violence to actually show for maximum impact. At times the violence is implied, at times it is not, at times it is literally in your face – and in close-up.

A foreboding atmosphere permeates the cross-country chase, the dank cinematography by Radek Ladczuk casting the thick forest in a sun-deprived hue and allowing Kent to build a sense of claustrophobia that plays with your sense of how close the two parties are.

Given the gender-sensitive nature of public discourse today it is tempting to editorialize over what The Nightingale is supposedly saying about the relationship between the sexes, toxic femininity, toxic masculinity, and so forth and so on and such like. This is all fine.

Yet The Nightingale is primarily a primal, visceral experience, a period revenge drama that plugs directly into the desire for that deeply satisfying catharsis possible only through acts of morally justified retribution.

It’s a truly awesome film, in every sense of the word.

In the vein of Widows, but not in its league,  comes this 1970s tale of three New York women who take to the criminal life when their husbands are taken away.

Now that they’re on their own they quickly learn that nobody is around to protect them from thugs or enforcers, and so become determined not to be pushed around any more.

In open defiance of the men-only criminal culture oppressing them, they concoct and execute a sustainable business plan that actually impresses the local mafia Don, with whom they are forced to deal.

Though mercilessly panned by critics, the only real flaw in this otherwise watchable crime drama is that its proto-feminist sentiments are too loudly signalled, resulting in reams of dialogue that sound like they’re coming from the mouth of writer/director Andrea Berloff rather than from the characters.

The performances are strong and jagged. Melissa McCarthy is again impressive in a non-comic role, and Elisabeth Moss (Handmaid’s Tale) provides a very cutting portrait of a beaten woman who channels her hatred of bad men into a love for violence.

As with so many films these days that are set in the 1960s and 70s, the attention to period detail appears to have taken up a lot of the production’s effort, with top cinematographer Maryse Alberti (Happiness; Tape; Creed; Chappaquiddick) capturing the grime and squalor of backstreet New York in the late 1970s.

In 1972 young director Sydney Pollack – a hot property with films such as This Property Is Condemned, Castle Keep, They Shoot Horses, Don’t They? under his belt – was tasked by Warner Bros to film Aretha Franklin as she recorded her album Amazing Grace at the New Temple Missionary Baptist Church in Los Angeles in front of a live audience.

The filming took place across two nights and the results were superb, with Pollack using a large array of handheld cameras to capture the sweat and passion of the event, often in close-up with cameramen crammed into tight corners and outside the framelines of their colleagues as they scurried around the church at Pollack’s command looking for the best angles.

Unfortunately, Pollack could not synchronize the audio to the images and the material sat in the Warners vault for some 35 years until enterprising producer Alan Elliott succeeded in fixing the issue.

He then produced and edited the footage into a sleek 90-minute tribute to Franklin, her beliefs and how perfectly her extraordinary voice channelled the power of gospel music.

Franklin, however, did not want the film released becausae of issues involving consent and control over her image, but with her passing late last year a deal was struck with her estate for the release of the film.

And what a film it is, not just of the performance, but of the electrifying ambience of that unremarkable venue as people, including Mick Jagger, came to witness what was going on.

The verite nature of the film – complete with crash zooms, focus corrections, bloopers and swish pans – lends the film an ultra-fresh feel that often makes it seem like it was shot yesterday.

Fans of Franklin are in for a major treat, but it’s to those who only know her from The Blues Brothers who are most likely to be touched by this exceptional filmed document.

As the prez lies in a deep coma poor Banning finds himself in a Fugitive-type jam as he runs from the authorities who think he is the guilty party.

When it comes to big-screen meat-and-potatoes action, Butler has carved out a nice niche for himself, and as solid as Olympus Has Fallen and London Has Fallen were, this third installment is easily the best. Director Ric Roman Waugh (Snitch; Shot Caller) keeps the many elaborate action sequences planted with one foot in reality so that, as wild as things get, common sense still dictates much of the film’s pace.

Wisely, the ageing Banning is not portrayed as an improbably able uber-mensch but a battered soldier with pain management issues. He’s an increasingly embattled figure, his ability to absorb blows, concussion waves and the stress of battle proving ever more fragile as he fights to keep his president and friend alive.

Piper Perabo, who some might remember from Coyote Ugly and the TV series Covert Affairs, puts in solid support as Banning’s wife, but it’s the baby who plays their child that deserves special mention. At an unexpected point in the film the baby puts in a performance moment that really chills. It’s quite the surprise.

Who knew that our nation would divide and erupt in non-stop debate over racism when, in 2013, AFL footballer Adam Goodes (in)famously had a 13-year old girl thrown out of a game for calling him a name?

This detailed package of the media and public reaction to the actions and utterances of Goodes is framed by his backstory and subsequent behaviour, yet there is enough fairly presented information in it for people to still form an independent assessment of the Goodes incident (which would have been a much better title, by the way).

There is way too much of journalist Stan Grant in the film, whose moralizing becomes a tad tedious, but a good balance is struck. Goodes is given plenty of screen time as is commentator Andrew Bolt (and others), whose views reflected those throngs who booed Goodes out of the game.

A genuinely insightful and controversial documentary is The Australian Dream, though one wonders whether the film is igniting debate it sought to quell. Whatever its intentions, the film’s value as a talking point is beyond any sensible argument.

As good as the horror-schlock of IT was, this way-overlong sequel pales in comparison by simply not containing sufficient scares. Or, indeed, any scares at all.

IT gave us such a good set up to the Stephen King story, and its unhurried pace allowed the characters to really develop. That screen time was well used, something that can’t be said this second time around.

Moving like an arthritic snail, the story of IT:2 picks up on the members of The Losers, that small-town gaggle of kids who faced down the evil demon, Pennywise the clown. Now they’re all grown up and living their own lives, but 27 years hasn’t dimmed their fear of the satanic spirit that still haunts their town.

So back they go to try and face their fears once and for all, but, boy, it’s a slow, unwieldy slog. Even with flashbacks to the younger selves of the adult cast (which includes Bill Hader, Jessica Chastain and James McAvoy) the film simply lacks the energy of the first, playing out like the second half a TV mini-series, which is essentially what IT:2 is.

No doubt once the film finishes its theatrical run it will have a great time on streaming platforms, where IT fans will be able to binge on both parts in one gulp, the leisurely lounge setting of their home viewing rooms offering them the chance to hit pause, make coffee, get snacks etc, luxuries denied you by the strictures of a no-intermission cinema screening.

If only the makers had heeded Alfred Hitchcock when he famously decreed how: “The length of a film should be directly related to the endurance of the human bladder.”

By that measure director Andy Muschietti and writer Gary Dauberman must have reckoned on the evolutionary expansion of the bladder in the decades since Hitchcock’s quip, for even if yours makes it through you’ll resent how many sequences there are in the film where you could have easily dipped out for a quick break without missing anything.

Surely, it would have been kinder to release a streamlined 90-minute version in cinemas, then hit fans with a luxury long edit for home.  Still, given the two hour-plus running times on so many modern films, perhaps evolution has caught up with Hitchcock.

Here’s a feather-light film whose inconsequential breeziness is perfectly complemented by its brevity.

A Chinese family discovers its matriarch has a terminal disease and decides against telling her that she only has a few months to live. They gather in China under the ruse of a fake marriage to celebrate her life, vowing to keep the truth from her.

The struggling American artist of the family (Awkwafina) has a few moral quandaries about what they are doing, but her doubts are effortlessly waved away, effectively keeping the film from developing into anything all that comically or dramatically engaging.

Writer/director Lulu Wang has been receiving plaudits for the film, as has Awkwafina (quite funny in Crazy Rich Asians), though her alleged comedy chops are absent for much of the film.