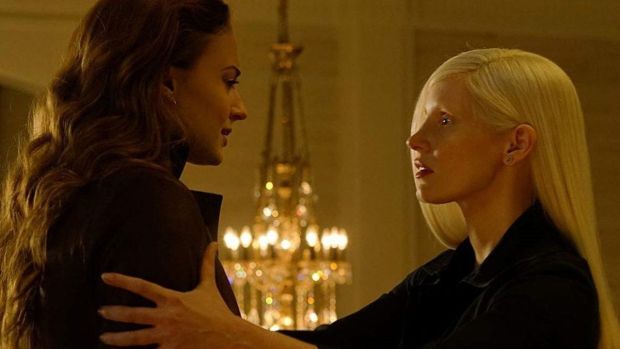 Just in case you didn’t get quite enough superhero-endorsed girl-power messaging from Wonder Woman, Avengers: Infinity War or Captain Marvel we now have X-Men: Dark Phoenix, a slickly paced, story-strong entry into the franchise that so emphatically puts women at the centre of the action that Raven (Jennifer Lawrence) actually tells Xavier (James McAvoy) that the organisation should be rebranded X-Women.

A good line and it gets a laugh but it’s about the only gag in the film, which keeps its face very straight indeed as it unfurls the story of Jean Grey (Sophie Turner), long-time student of Xavier’s special school for the gifted and different.

Her powers of telekinesis, discovered when she was a little girl, go into overdrive after an orbital rescue mission goes wrong.

She not only becomes super-powerful, she seems to become all-powerful, out-zapping everyone, including the mind-mining Xavier and Magneto (Michael Fassbender).

The only match for her is a scheming blonde alien being (Jessica Chastain, in high heels throughout) who has plans for Jean and her powers.

Running a refreshingly lean 114 minutes – including about 10 minutes of credits – Dark Phoenix is full of the grade-A action we’ve come to demand from these films.

But what really sets it off is the dramatic focus on Jean’s journey. This keeps things emotionally grounded, however fantastical the FX sequences get. It’s quite a feat.

To his great credit, debut director Simon Kinberg, a veteran producer who has been with the X-franchise since The Last Stand, often makes the film feel like a character drama with visual effects rather than a demolition-derby superhero movie with a good story. He also wrote the screenplay, which might account for its unusally high degree of coherence.

The central performance from Tucker (Game of Thrones) is exceptionally committed and Kinberg judiciously wrings out Marvel’s signature theme about power coming with responsibility.

But how does it stand in the canon? Dark Phoenix is arguably the best in the
X-Men sub-franchise so far, and is certainly one of the better Marvel films.

As for its feminist-cred compared with Captain Marvel, Dark Phoenix is by far the superior film.

Regrettably, not even the great Judi Dench can do much to enliven Trevor Nunn’s pedestrian telling of a woman who is accused in her autumn years of giving vital nuclear secrets to the Russians. Sophie Cookson plays the young version of Joan Stanley, a fictionalised version of a real person who put her personal politics ahead of her country’s best interests.

This is the first movie in 22 years for Nunn, and it really should be his last unless he demonstrates some flair for the medium.

A veteran stage director of formidable range, Nunn has simply not proved with the handful of films he has made thus far – Hedda; Lady Jane; Twelfth Night, his most recent in 1996 – that he has much vision or energy. To wit, Red Joan doesn’t even work as a cautionary tale about watching who you mix with at work.