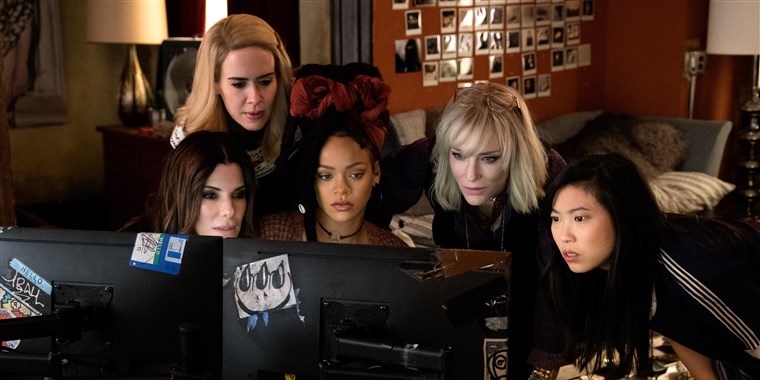 This over-hyped package of big names, movie branding, high fashion and girl-power BS is a near-perfect example of a Hollywood film designed to kill big on opening weekend despite the fact that there’s barely a movie there at all.

In the wake of the dreadful Oceans trilogy by Steven Soderbergh starring George Clooney and Brad Pitt – which took around $1.2 billion theatrically – we now have the sister of heist-master Danny Ocean (Clooney), Debbie (Sandra Bullock), who is freshly released from prison and itching to get her hands on some jewels as revenge against the dude who put her inside.

Making up the eight alongside Bullock is a very attractive and glamourous cast, to be sure: there’s Cate Blanchett, Helena Bonham Carter, Anne Hathaway, Mindy Kaling, Sarah Paulson, Rihanna and Awkwafina.

Now this all sounds like crimedy (crime comedy) fun, and it could have been had the direction by Gary Ross (Hunger Games) not been so horribly flat and pedestrian.

It’s hard to see any effort in the film. There’s no comedy to speak of, no real drama and, worst of all, no tension when it comes to pulling off the heist. The great American director Jules Dassin (Topkapi; Rififi) was a genius at putting audiences on the edge of their seats during a heist sequence. Even old comedy films such as Peter Yates’ 1972 classic The Hot Rock put some heart into the crime. In Ocean’s 8, the caper sequences are handled with all the suspense of ordering room service.

And while the cast spend a lot of time vogueing in various outfits there’s barely a noteworthy performance in the film. Even the usually brilliant Blanchett seems cast in an icy glaze. And why does Rihanna keep getting offered films? The cast certainly never act as an ensemble. There is one genuinely funny turn in the film, but that comes from James Corden as an insurance investigator who turns up for the final stretch of the movie.

Most irritating of all, Ocean’s 8 is the latest example of the kind of post-content cinema championed by corporate Hollywood – that is,  films that show no regard for basic storytelling principles. The chief example in this plop involves a security device that is described in some detail as though it’s a major plot point, then promptly forgotten about at the next major plot point.

But story holes like that simply don’t matter with package deals like Ocean’s 8, which is best described as being a movie-shaped collection of brands and cinematic posturing rather than a movie proper.

As for the much ballyhooed feminisation of the Ocean’s brand, it really doesn’t do the whole Hollywood girl-power crusade much good. Originality is what’s going to fuel that, not copying what the boys do, as Ghostbusters so painfully proved.

The Soderbergh films tried hard to replicate the natural cool of the “Rat Pack” from the 1960 original’s film gang of Frank Sinatra, Dean Martin, Sammy Davis Jr, Peter Lawford and Joey Bishop. But all it ended up as was a faint copy.

So what do we end up with here? A copy of a copy. Well done.

In a genre so driven by convention it’s great to see another horror movie so soon after A Quiet Place take a few left turns and deliver the scares we expect by means that we don’t.

In this very effective, cliche-averse chiller by writer/director Ari Aster a family is beset by supernatural trouble after an elderly relative with an attic full of secrets passes away.

Toni Collette plays the psychologically tormented mum, Gabriel Byrne is her long-suffering husband, Alex Wolf is the archetypally awkward teen and Milly Shapiro does a swell job as the latest in that long line of creepy movie kids.

The film is full of inventive in-camera effects and lighting and delivers a decent handful of jolting shocks. Toni Collette, famous as the haggard mum from The Sixth Sense, out-does herself here as a woman on the verge of complete mental collapse. Especially enjoyable is the collision between her ingrained 21st century cynicism about the trickery behind seances and the belief that there is something haunting her house.

Corporate drug dealing goes wrong in this engaging, dizzingly plotted south-of-the-border ensemble crimedy as hapless underling Harold (David Oyelowo, from Selma) is sent to Mexico to set up deals for a new drug.

As things go pear-shaped Harold becomes increasingly aware of what a pawn he is and tries to exact some poorly thought out revenge.

A troubled young girl’s obsession with giants threatening her quiet American coastal town give voice to her anxieties over bullying, personal loss and domestic stress.

Similar ideas were pursued in The Babadook and A Monster Calls, but not with dramatic sting deployed here. Despite strong reviews and impressive production values the film has barely attracted an audience, hence it’ll hopefully find life  after it quietly dies at the box office.

Resplendent in some very impressive prosthetics, Woody Harrelson continues his run of latter-career acting triumphs with this richly nuanced portrayal of Lyndon B Johnson, the foul-mouthed Texan who became US president after John F Kennedy was assassinted in Dallas on 22 November, 1963.

A very well-made drama, directed by Rob Reiner (When Harry Met Sally; The American President), this early-days biopic isn’t quite as good as the Bryan Cranston film All the Way but, along with Tom Wilkinson’s performance in Selma, it continues Hollywood’s crusade of recasting LBJ’s public image.

For decades LBJ was chiefly known as the doofus who presided over the mess of the Vietnam war; these films largely side-step that – yes, that’s being political – to champion his critical role in keeping America together after JFK’s death and in the success of the Civil Rights movement. Jeffrey Donovan (Burn Notice) does a fine job as Jack.