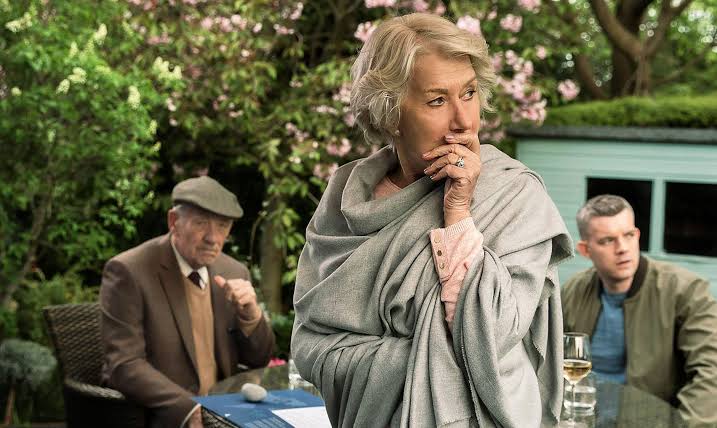 That old joke about some actors being so good they could put on a compelling performance reading the phone book might be a tad over-used, yet in the case of British veterans Helen Mirren and Ian McKellen it certainly applies. They could probably make a grocery list sound like Godfather II.

So the prospect of seeing them share the frame in The Good Liar is a rather big drawcard and one that pays off handsomely in this handsome, prestige, low-key thriller.

Deftly directed by Bill Condon (Gods and Monsters; Twilight; Beauty and the Beast), who builds a strong mystery from a very basic premise, the story plays very effectively with the perils of online dating, tapping into that universal suspicion we all share about the honesty of those we deal with over the internet.

The adventure is sparked by two elderly lonely hearts who meet through a dating service.

Keen for companionship is Betty (Mirren), a lonesome widow living a hollow life in a designer estate. Eager for more than friendship is Roy (McKellen), an experienced, high-end confidence trickster who’s not above deploying a bit of violence to get his way and to keep people in line.

He marks Betty as a prime target for fleecing and, with a few doses of sophisticated charm, inveigles his way into her affections, her home and, eventually, her bank account.

Those familiar with this brand of twist-laden mystery will likely twig early as to what is going on as these two engage in a dance of deception and naivety, although the big reveal in the final reel is something nobody could see coming.

McKellen and Mirren are effortlessly good, with Mirren especially adept at portraying somebody whose warm heart and need for companionship overwhelms the cool head she needs to protect herself from being taken advantage of.

As for McKellen, he oozes with the seductive charm and slick manner of somebody who could sell timeshare apartments in the Antarctic. He certainly knows the fine line between slimy and slick, always ready to put a classy sheen over his rough edges.

Among the solid supports are Jim Carter (Downton Abbey) who plays Roy’s trusted partner in ripping people off, and Russell Tovey as Betty’s super-suspicious son, who views Roy’s sudden presence in his mother’s life with a growing anger and need to investigate.

Bleah. Horror films should have at least one or two good scares in them, so by that measure alone this dismal, dull killfest about sorority girls being targeted by a maniac falls ever so flat.

The film reprises the basic premise of the original 1974 Black Christmas (directed by Bob Clark of Porky’s/A Christmas Story fame) but mixes in a big splash of #metoo material, presumably to make it topical and score some woke cache.

No carps there, only the direction by Sophia Takal (who co-wrote this with April Wolfe) is so loose and devoid of suspense that the film simply becomes boring and predictable, especially when we start getting glimpses into the secret society on campus.

Though the quartet of characters at the core of the mayhem are played with admirable zest – kudos to Imogen Poots, Aleyse Shannon, Lily Donoghue and Brittany O’Grady – Takal fails to generate much tension from the “gender war” vibe she tries to infuse into the splatter.

Sure, it was admittedly brave to try something novel in a formulaic horror film, but what’s missing from Black Christmas is the driving force of a powerful motive, something that makes the 1978 anti-rape classic I Spit on Your Grave so memorable, and to which films such as Black Christmas owe a huge debt.

In a pretty funny, straight-faced performance, Cena plays Jake, a promotion-hungry fire fighter who, along with his crew – actor/comedians Keegan-Michael Key & John Leguizamo, with Tyler Mane, also an ex-wrestler – has to care for a group of unruly kids in a secluded deep-forest HQ during a fire emergency.

While the firemen are brave and community minded, the guys, naturally, aren’t very good at taking care of kids.

And there you have the excuse for a long string of pratfalls and visual humour, all tied together with some action scenes and Jake’s gradual realisation that children have been missing from his job-oriented life.

There’s no real villain in the film, which deprives it of tension somewhat, and the pace does slacken with the sub-plot involving a scientist (Judy Greer) and a pond of endangered frogs, but it is a harmless, reasonably enjoyable time killer, produced by Nickelodeon.

Side note: At the film’s premiere, respectful acknowledgement was made before the screening of the courage and fortitude of those battling our present fire crisis. It was a good call, warmly received.