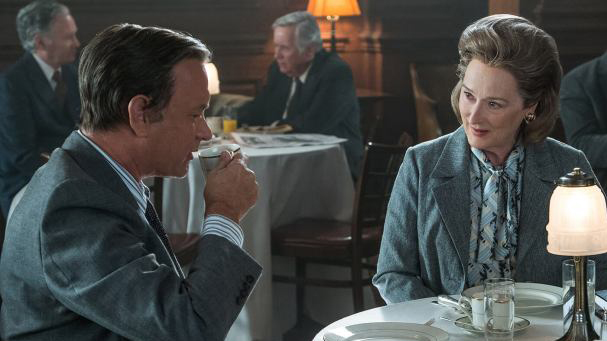 Much like 2015’s Spotlight, which took out Oscars for Best Film and Best Original Screenplay, Steven Spielberg’s new drama The Post can justly be seen as a great big juicy slab of Oscar bait that plays upon the nostalgia for that wonderful time, many years ago, when the mainstream media was regarded as a bastion of truth and free speech that chose the public good over its own agendas.

That is, of course, about the most cynical way to regard The Post as you go in, yet those prejudices soon evaporate once the compelling nature of its drama unfolds and takes hold.

Set in the early 1970s, the film is a fairly straightforward, doggedly detailed period film about the efforts by The New York Times and The Washington Post to defend publication of the so-called Pentagon Papers, which was an exhaustive report put together by Defense Secretary Robert McNamara chronicling America’s war in South East Asia. It contained a lot of sensitive material, much of which was either unknown to the public or contradicted what was being told to them by government.

The film captures both the sheer excitement of the discovery by Post editor Ben Bradlee (Tom Hanks) and its owner Kay Graham (Meryl Streep) that they have a hotter-than-hot story and the crippling fear of what an adverse ruling by the courts over the legality of publication would have. The paper was on its knees financially and one wrong move could have meant doom. Spielberg plays on that tension Bradlee and Graham felt between compromising for the sake of survival and risking oblivion in the name of the truth.

Circling back to the film’s Oscar bait credentials, Hanks and Streep put in terrifically nuanced performances that reflect the different worlds inhabited by professional men and women back in the 1970s.

As Bradlee, Hanks’ owes a great deal to Jason Robards, who won a Best Supporting Actor Oscar playing Bradlee in the 1976 classic All the President’s Men, which dealt with the Watergate scandal that happened a year after the Pentagon Papers. When dealing with his reporters he is full of newroom bluster but his manner downshifts when dealing with Graham and the paper’s perilous situation.

For her part Streep slips easily into the proto-femininst mold, working hard to make herself heard and respected in rooms stuffed with powerful men who barely pay any attention to her except when directed to by another man. Conscious as she is of her gender and of the stand she has to take, Streep manages to lift the character several notches above the cliche it could have been.

Is there a slightly refracted agenda behind the film? At a guess there probably is, but it’s largely benign. At a time when the reputation of the press is probably as bad as it has ever been (especially in America), people have an understandable tendency to embrace the folk memory of that time when the media was considered the pursuers and upholders of truth, not as self-serving and biased.

So, if anything, The Post can be considered a tacit reminder of how respected the media once was, and, perhaps, can be again. That seemed to be the Oscar-baiting vibe behind Spotlight and that film did OK at the box office and with Academy voters.

Then again, the excellent 2015 Cate Blanchett/Robert Redford drama The Truth was a deeply critical look at the workings of the 21st century media, and nobody much cared for it.

Perhaps it’s only those films that flatter the media that end up attracting media.

Just how much Winston Churchill can we stand? A lot, apparently.

In the wake of the sterling drama Churchill, in which veteran British character actor Brian Cox joined that long line of actors who have portrayed England’s war-time prime minister, comes Darkest Hour in which Gary Oldman dons a lot of make-up to deliver an intimate, intermittently powerful portrait.

Much like Churchill, this finely crafted drama, directed by Joe Wright (Atonement), takes a deep dive into the public and private lives of the man often polled as the most important political figure of the 20th century.

The chief difference here is that while Churchill revolved around D-Day in 1944, the drama here keeps focus on those few perilous weeks in 1940 when it looked like England was going to go under in its war against Germany under Hitler.

Alone (America was still neutral at that stage), in political turmoil under Prime Minister Neville Chamberlain and with its army stranded on the beaches of Dunkirk while the Luftwaffe bombed the English mainland at will, Churchill emerged as the chief galvanizing factor in Britain’s survival.

A flawed and defiant military strategist – one  sharp moment has him defending the Gallipoli campaign from World War 1 as a good idea that should have worked – Churchill is increasingly dismayed by talk of appeasement with Hitler.

While the facts and figures sprinkled throughout the drama will help younger filmgoers understand why Churchill commands such attention from filmmakers – Christopher Nolan was careful to make Churchill a key figure in Dunkirk, even though he is never seen – the film is far from being a mere history lesson.

The chaos of those days where every moment brought a new crisis is splendidly captured by Wright who sets the film largely in claustrophobic bunkers, bombed out streetscapes and the smoky theatre of parliament.

Oldman, clearly aiming for a career-topping performance, immerses himself in the character, giving every aspect of Churchill a memorable resonance, from his sense of humour, to his mastery of language to his short temper and bursts of humility. Oldman certainly deserves an Oscar nod for his raging centrepiece performance.

That aside, kudos must go to Ronald Pickup who, as Chamberlain, brings a sad humanity to an historical figure often caricatured for his willingness to negotiate with Hitler. It’s a real gem of a turn that blends experience with naivety as Chamberlain tries steering England away from further conflict.

In what is likely an unintentionally topical sequence, the film recreates the time when Churchill, tortured by having to choose between negotiation or more war, went into the crowd and sought the opinion of ordinary people.

Though this helped make up his mind, it’s fascinating to watch how Churchill then embellished on the experience, turning it from an encounter with random commuters to a key moment of nation building.

It wasn’t exactly fake news, but it certainly makes the point that embroidering grand narratives from a few factual morsels is not a practice peculiar to these times.

Back then, though, it was in the service of a cause that was unquestionably good.

Fairly funny, made-for-kids sequel to the 2014 animated film about a bunch of city park animals looking for the easy life. In this fast-moving sequel, the lazy squirrels who are living it up in a nut shop are forced back into the nearby park. However, the corrupt mayor wants to turn the place into a low-rent leisure park, so the critters have to fight to save the place. This involves recruiting an army of angry white mice lead by an alpha-rodent voiced by Jackie Chan. The developer-as-villain cliche really has had its day and though kids won’t care (obviously) adults might find the predictability here a tad tiring.