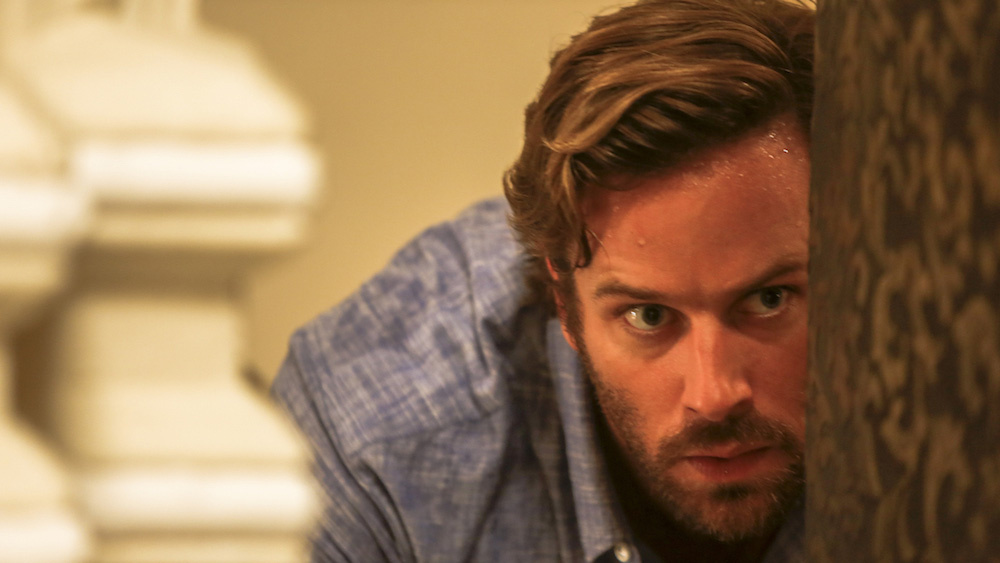 Not since 2009’s Balibo has an Australian film hit us with such dramatic force, emotional power or topical urgency. Hotel Mumbai is not just an extraordinary, brave film, it is emblematic of the type of film the Australian film industry should be making more of.

In vivid detail, the film recreates the horrific attacks by Islamic extremists on the city of Mumbai in 2008, with teams of men taking cabs into the heart of the city and killing as many people as they can with the grenades and AK47s stashed in their backpacks.

The symbolic focus of their attack is The Taj, the glittering luxury hotel where rich guests from around the world are pampered by proud staff who consider the place a second home.

Guided by an anonymous controller casually issuing lethal instructions over the phone while he monitors the all-important media coverage on TV, the terrorists blast their way through the lobby, tossing grenades and shooting anyone they see.

Methodically, they stalk hotel rooms as people hide under tables and in closets, trying not to make a sound as the killers hunt for victims in that sudden, menacing silence that follows the crash of a machine gun.

The shock value of seeing innocent people murdered en masse is inevitable in a film of this sort, and there are some moments of sheer barbarism that are designed to stay with you. Compounding the horror is the incompetence of the local police and the jaw-dropping news that the nearest Special Forces unit is hours away.

Yet there is a measure of restraint in the film’s portrayal of extreme violence. Make no mistake, it is stark, ugly and distressing, often wince-inducing, but it is not relentless. Were it so, the film would have been nigh impossible to sit through.

Most importantly, the film is ultimately not about death, it is about life. As the attacks occur, we follows a clutch of characters trying to survive the slaughter, including hotel staff who refuse to make a run for it so they could stay and help guests through the ordeal.

Director Anthony Maras, who co-wrote the heavily researched screenplay with John Collee, does an exemplary job fashioning the real-life horrors of the attack into a compelling, if gruelling, feature film that highlights the humanity and altruism that can emerge during such atrocities.

In its most extreme scenes we see moving moments of human connection, traditions being broken for the sake of understanding and moving acts of selflessness. In one brilliantly judged vignette, the clear distinction is made between peace-loving Muslims and the Islamic sociopaths who are happy to kill any Muslim they see along with everyone else.

In an admittedly brave move, a degree of humanity is afforded the young terrorists, though this never slips into sympathy. At the beginning of the film they are brutal killers. By the end you get the impression they’ve been duped by those who have promised them Paradise.

The ensemble cast do great job, given the extreme emotional spaces they are forced to occupy. They include: Dev Patel (Slumdog Millionaire, and one of the film’s producers); Armie Hammer; Jason Isaacs; Tilda Cobham-Hervey (charged with caring for a baby during the massacre); and Anupam Kher (sterling as the heroic chef Hemant Oberoi).

To her great credit, veteran Australian actress Carmen Duncan makes a strong impression in a brief but memorable role as a rich Australian woman steeped in prejudice.

Co-produced with American and Indian partners, and clearly made on a healthy budget, Hotel Mumbai hopefully signals a step towards more contemporary, confronting and contentious Australian films.

As for Maras, the film is a remarkable debut. Best known for his acclaimed short film The Palace (2011), Maras shows a level of skill both as a director of actors and of action that belies the fact that Hotel Mumbai is his first feature. He also takes some credit for the film’s sharp editing.

The big fear now, as is too often the case, is that he will be snapped up by smart Americans and shipped off to make a studio film before he gets the chance to make another film here.

Here’s hoping that doesn’t happen, at least for a few films yet.

Director Anthony Maras was kind enough to sit down with us to discuss the film. He was very generous with his time, so if you’d like to enjoy the long version of the interview just click on the link at the end of this abbreviated edit. (Be warned: He drops the odd cuss word and you will see a close up of the thumb he almost lost during production.)

It seems there are few things in the movie world right now that are more erratic than the quality control at Marvel Studios.

Regardless of their multi-hundred million dollar budgets, Marvel films can swing from great (Avengers: Infinity War)  to watchable multiplex mulch (most of the first sequels) to downright bad (Avengers: Age of Ultron).

Now, after way too much hype, comes the massively mediocre Captain Marvel, the massively overlong origin story to the superhero Nick Fury (Samuel L Jackson) called out for at the end of Infinity War before he disintegrated.

She’s set to feature big-time in the upcoming Avengers: Endgame so Captain Marvel is meant to offer us an all-important backstory so we can resonate more deeply with her character when she arrives in Endgame to help the other superheroes out.

Yeah, well, bite on that bait if you like, but Captain Marvel is an unremarkable, passable time killer, blandly directed by Ryan Fleck and Anna Boden, whose credits as a directing team include the arthouse films Sugar, Half-Nelson, It’s a Funny Story and Mississippi Grind.

Not that there’s anything wrong with the idea of arthouse directors suddenly presiding over tentpole blockbusters. Look at Colin Trevorrow, who went from the little-seen Safety Not Guaranteed to the the all-conquering Jurassic World. But whereas he brought style and wit to his epic, Fleck & Boden are pedestrian, perfunctory and largely humourless.

Surprisingly, Larson’s performance is wooden, comprised mostly of awkward green-screen voguing – that is, flailing about at the behest of the visual effects crew – and furrowed-brow scowls that are intended to show us all that she is one serious gal who is not to be messed with.

The stuff about how she got her superpowers is convoluted and makes for a lot of wordy stretches, while the film’s big action scenes are so lacking in imagination the screen often looks as though it’s being continually doused in technicolour vomit, as multi-hued energy bolts and death rays race from one side of the frame to the other.

Way too much has been made about Captain Marvel’s gender and how this film is supposed to represent a significant step forward in the evolution of big films and franchises brandishing female leads.

To be fair, it is a step forward, and should the film transmit a positive, empowering message to any of the young girls who see it, all the better. But Captain Marvel is no milestone by any fair measure. And it’s certainly nothing new.

Terminator, Alien, Aliens, even the original Star Wars proved that a hero’s gender isn’t an issue when it comes to box office, that what counts is the quality of the film.

There have simply been far too many hit female-led films recently for Captain Marvel’s claim that it is anything super-special to carry much weight.

Also, let us not neglect the under-appreciated significance of the Underworld and Resident Evil franchises, each with female leads (Kate Beckinsale and Milla Jovovich respectively.) The Underworld films have clocked up about $600 million, while the Resident Evil series has hit more than $1.2 billion American dollars.

So, if anything, Captain Marvel – which has taken a healthy $US524m since opening last week (8 March) – owes a huge debt to the femme-led trailblazers that have come before, and that deserve to be heralded a lot more than this film.

All this puts into perspective the idiocy of the “review bombing” that has taken place over the film.

For the uninitiated, what happened was that the film’s supposed championing of feminism – the casting of Larson, an outspoken feminist and advocate for equality, was supposed to have been especially “provocative” – roused a group of reactionary purists to act against the movie.

No doubt writing from their mother’s basement, these guys expressed their resentment by posting negative reviews on Rotten Tomatoes so as to bring the film’s score down. (The site has wisely altered its format to prevent this from recurring.)

All that this shows is just how in need of genuine human contact such trolls are. It’s almost too stupid for words. For all its flaws the film does carry an empowerment message to young girls, which is nothing any sensible person would object to.

Also, the film is no leftist rallying cry dressed up as a movie. If anything, it has strong right-wing credentials in its adoration of American military might.

Carol Danvers is a proud air force pilot and her transformation into Captain Marvel is symbolic of American air supremacy. That’s no theory, it’s a point made clearly in the film and it’s a wonder how even the thickest internet troll could have missed it.

Slick, ripper little low-budget thriller in which a very nasty sex “game” played by party-loving womaniser Lewis (Benedict Samuel) goes very wrong, leading to a lethal domino effect. The first half is fairly taut and engaging, but there is a definite point in the film where a rather self-consciously silly plot hole appears and the film switches gear to horror comedy. Technically, you shouldn’t forgive such transgressions, but you’ll have more fun if you do. Directed by David Barker, who co-wrote the screenplay with Lou Mentor, the film has a fistful of neat twists and some very convincing make-up effects straight out of the Tom Savini school.