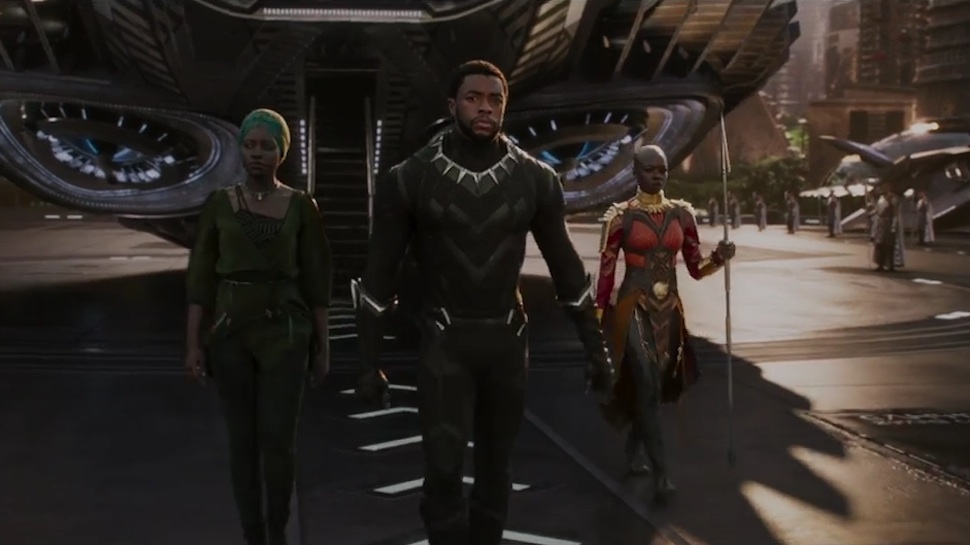 BLACK PANTHER *** (134 minutes) M
In a sensible world the arrival of Marvel’s Black Panther would be greeted as nothing more than a worthwhile franchise extender full of digitally adrenalised action sequences, a few good jokes and the usual good-vs-evil dynamics that have fuelled all the other films.

But, of course, Black Panther is not supposed to be “just another film” because it heralds the first black superhero in the series.

This supposedly startling fact is meant to imbue the film with such a degree of cultural and political importance you’d think it was every person’s duty to see the film twice and praise it as the most significant event in the history of civil rights since Martin Luther King Jr declared that he had a dream.

To be clear: as a superhero film Black Panther is fine entertainment that dutifully hits all the beats it is supposed to in terms of action, pacing, drama and conflict. It is standard, well-made multiplex filler. Anyone willing to proceed beyond that by decoding the film as some sort of sophisticated allegory about the struggle for black rights might find themselves tied up in knots.

Undoubtedly the best thing about the film is that it stars Chadwick Boseman, a fabulous black actor who will hopefully have his overdue day here. He was splendid in the 2013 baseball film 42 and did not get the Oscar recognition he deserved for his portrayal of James Brown in 2014’s Get On Up.

He plays T’Challa, the king of Wakanda, an African nation that appears to be just another struggling country of the developing world, full of fields and farmers and pleasant scenery.

Yet undernearth that scenery, literally, is the real Wakanda: a super-wealthy, super-privileged, super-high tech African nation that exists in a secret domain beneath the landscape. Its evolution has been accelerated by the power of a metal called vibranium that also allows T’Challa to assume super powers, including a nicely designed protective suit, thus becoming Black Panther (who popped up in Captain America: Civil War).

Now, despite its wealth, power and technology, Wakanda deliberately remains  hidden from all those needy, less-fortunate African countries, which Wakanda’s leaders insist they care about.

It’s this lack of action that motivates N’Jadaka (Michael B. Jordan, in a meaty, scenery-chewing turn) to take on T’Challa for the leadership of Wakanda, the plan being to use its resources to weaponise their blissfully ignorant cousins so they can rise up against the better off.

T’Challa also wants his nation to use its blessings to help others, but in a more subtle, peaceful manner.

Layered into this typically tangled, over-plotted Marvel movie – whatever happened to the art of big-movie screenwriting where multiple storylines blended together rather than crashed? – is a sub-plot involving sneering bad guy (Andy Serkis) to acquire vibranium. He’s got a super-powered arm and a syrupy South African accent and accounts for some of the film’s niftier action sequences.

As is typical with these bloated, post-content superhero films there are storyholes all over the place. It’s yet another Marvel film where paying too much attention to the story actually pays a negative dividend.

In addition, the morally dubious nature of Wakanda’s two-faced existence makes one wonder why Marvel didn’t adopt a more ambivalent, Dark Knight-like tone. Perhaps they’re happy for intelligent villains and self-doubting heros to continue being the preserve of DC Comics.

Still, keep your brain in neutral and you’ll enjoy Black Panther for the serving of over-cooked mass-market fodder that it is.

But that ain’t how many people are choosing to react to Black Panther, the arrival of which is apparently more akin to the Sermon on the Mount than something to help sell popcorn.

Because it features a black superhero, has a largely black cast – including such notables as Forest Whitaker, Angela Bassett, Lupita Nyong’o and scene-stealing newcomer Letitia Wright – and sets its story in Africa, the film is being subject to some very generous interpretations about what it allegedly says about racial politics, especially in America.

For those willing to give themselves headaches trying to reconfigure this comic book movie into a piercing commentary, go ahead and knock yourselves out. Just beware that any such exercise, done to promote whatever agenda, is fraught with danger.

For instance, reading the two main warring characters as avatars for Martin Luther King Jr and Malcolm X is the kind of reductive practice that insults the accomplishments and complexities of both men.

Similarly, if you really want to deep-read this feather-weight film, how are we to interpret the climactic battle scenes of Black Panther? Are they meant to serve as commentary on the dubious achievements of the Black Lives Matter movement?

It’s far more useful to see Black Panther as a step in the right direction as far as black representation on screen goes. It’s great to have a black superhero up there, sure, and if such an icon encourages black kids to be the best that they can be, who can argue?

Indeed, a nationwide, community-based enterprise called the Black Panther Challenge is designed to get as many black kids in to see the film as possible so that it can inspire them. Again, who would say boo to that?

Yet this needs to be tempered by the cold commercial reality that Marvel has long been itching to tap the huge, well-defined African-American movie audience with a Black Panther movie.

And while we’d welcome more black heroes on the big screen – bring on as many as you can so long as the films are good – it’s important to issue a very loud reminder note that Black Panther doesn’t exist in a vacuum.

Wesley Snipes, who was working on a Black Panther film about 25 years ago, took about half a billion dollars at the box office in three film as Blade.

Danny Glover was one of the first black action movie heroes in Predator 2, and was a lead in the hugely successful Lethal Weapon action series.

Running parallel to him was Eddie Murphy. He might be off the boil now but let’s never forget the impact his string of action films had, including the Beverly Hills Cop movies, which took more than $1.4 billion back in the 1980s.

Will Smith played a wayward superhero in 2008’s Hancock ($700m global take) and headlined the Men in Black trilogy ($1.6 billion).

Billy Dee Williams fought in The Empire Strikes Back and Return of the Jedi (blowing up the Death Star, no less) while Rocky boxer Apollo Creed (Carl Weathers) became a franchise brand in his own right with 2015’s Creed.

Aptly, Creed’s director Ryan Coogler also directed Black Panther, and a fine job he does. But as far as creeds go, the chief one he was most eager to observe was the one creed that really matters, which is to make sequel-spawning mountains of money.

This, Black Panther will no doubt do. And should the film inspire kids to become high achievers, all the better.

Set in suburban Sacramento in 2002, the film is a deftly etched character dance about a typically disaffected teenage girl (Saoirse Ronan) and her rough ride through the last year of high school.

Her main foe is her loving, but strict mother (Laurie Metcalf, justly nominated for an Oscar) who strives to make life better for her thankless daughter, who insists on calling herself Lady Bird instead of her given name.

What she goes through is pretty unremarkable as far as movie teen girls go: there are boyfriend issues, she suffers from class envy, has strained feelings with her best friend (a winning, warm performance by Beanie Feldstein) and is beset by conflicting emotions about her caring mother and slightly pathetic, try-hard father (Tracy Letts).

Fortunately, Gerwig imbues her characters with an unvarnished authenticity, helping the film get over its first-reel clunkiness before it hits its gentle stride.

The film is not so much a coming-of-age story, where the main character learns big life lessons; it is more a what-it’s-like-to-be-this-age story. The film aims for a deeper truth, being that life’s most important lessons come incrementally, in small, touching moments, something Lady Bird comes to appreciate, however reluctantly.

Having racked up enough indie credentials for a lifetime in films such as Frances Ha, Greenberg, Damsels in Distress and Mistress America, Gerwig proves herself an assured director, eliciting strong yet subtle performances from a great cast and transforming what are often wisps of story into a satisfying, coherent whole.

And while she knows when to let her characters go wild, Gerwig is a clear lover of understatement. The film’s final, quiet moment is made all the more moving for its lack of grandeur.