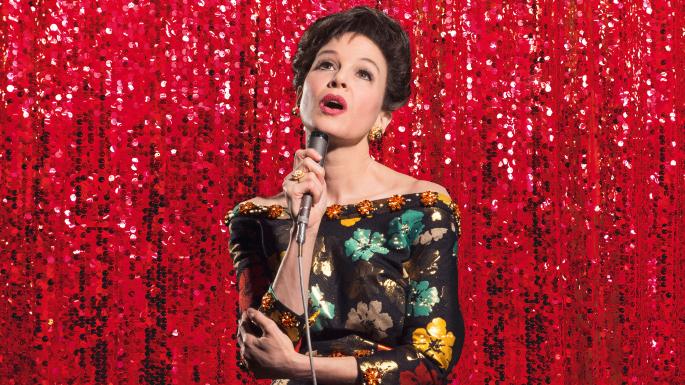 The final, fleeting taste of stardom and public adoration enjoyed by the legendary actress and singer Judy Garland before her untimely demise is captured with qualified sentimentality and considerable poignancy in Judy, a bitter-sweet biopic spiced by a stellar titular performance by Renee Zellweger.

As history sadly records, Judy Garland (mother of Liza Minnelli) was one of Old Hollywood’s most tragic flame outs, dying at 47 of an accidental drug overdose in a rented house in 1969.

Though the film makes no bones about what a personal and professional wreck Garland was – a pill-popper who was notoriously late for gigs – Judy deliberately stops short of showing her ultimate fall.

Given all her late-career failings, the film is designed chiefly as a tribute to her tenacity as a mother and her fortitude as a performer, and so delivers a touching portrait of Garland’s final flourish.

Having burnt out in America Garland, ever desperate for money, reluctantly agrees to tour London where her popularity seems immune to the bad-mouthing that had besieged her at home.

Despite her lack of professionalism, which director Rupert Goold and screenwriter Tom Edge are at pains to detail, Garland is received with love and, it seems, without condition.

Running parallel to her good fortunes on stage is her battle to retain custody of her children, which encounters considerably more hiccups.

Adapted from Peter Quilter’s stage musical End of the Rainbow, the story is studded with Garland standards all of which are sung by Zellweger who, as well as being in fine voice, was clearly happy to look haggard for the role.

Garland was a complicated mess and Zellweger  truly captures Garland’s contradictory cocktail of confidence, desperation, ebullience, despair and stage fright. She’s a has-been with a crinkled face and a defiant manner determined to reclaim her share of the spotlight.

This might not be Zellweger’s best performance, but it is easily up there with her memorable, versatile turns in Chicago, Cold Mountain (which got her a Best Actress Oscar), Jerry Maguire, Nurse Betty and, of course, the Bridget Jones trilogy.

Still, with the advent of Judy and all the plaudits it is rightly drawing for Zellweger’s performance, it is only right and proper to take pause and remember the sterling, Emmy-winning work Judy Davis delivered as Garland in the 2001 mini-series Life With Judy Garland: Me & My Shadows (based on the memoir of Garland’s daughter Lorna Luft, who also executive produced).

Davis channelled Garland in that series and there are moments in Judy, particularly in the musical numbers, when Zellweger hits comparable highs.

Clad in black and looking magnificent, Angelina Jolie is back as Maleficent for a family-friendly adventure featuring awesome fantasy design work, a paper-thin story and a rather nasty Michelle Pfeiffer.

For those not up with their Disney iconography, Maleficent was the evil fairy godmother figure in the fairy tale Sleeping Beauty. She was angry that she didn’t score an invite to the christening of Princess Aurora so she cast a spell that deemed how Aurora would die if she pricked herself on a spinning wheel spindle.

This happens, but it only sends Aurora into a deep coma from which she will awaken once she is kissed by her one true love. This also happens, but only in defiance of the angry Maleficent, who tries deterring him by turning into a huge dragon. Anyway, he throws a sword at her, she dies, he kisses Aurora and that’s pretty much it – the original Disneyfied Sleeping Beauty story in a nutshell. You’re welcome.

But in the hit 2014 movie Maleficent, the titular villain was very cleverly recast from being Aurora’s destroyer to being her foster mother. (Where is the Oscar category that recognizes these great feats of screenwriting?) The film was inventive and spectacular, ending on a high note that, it seemed, polished the story off pretty conclusively.

Yet we all know the rule of the movie jungle –  when a film goes on to make $750 million at the cinema (double that again for its post-theatrical life) a sequel shall be made, regardless of whether there’s much story left to tell.

And there’s not much to go on in Mistress of Evil. Aurora (Elle Fanning) is all set to wed Prince Phillip (Harris Dickinson), and thus unite the human and the enchanted non-human worlds (the one with all the fairies and pixies and goblins, etc) into one harmonious whole.

One problem: the proto-fascist Queen Ingrith (Michelle Pfeiffer) subscribes to a racial purity policy of Us and Them, and is happy to use any ruse necessary to prosecute her beliefs, including the development of a new weapon by her alchemist (Warwick Davis from Life’s Too Short) that instantly dissolves fairies into dust.

Her deep hatred leads to war between the worlds, with some pretty original-looking battle scenes as battalions of winged warriors swarm around the Queen’s fabulously designed castle. Weaved into all this glorious fighting is a souffle-lite serving of “let’s all get along” messaging.

In terms of visuals, director Joachim Ronning does a swell job recreating the lush fantasy/Goth look of the first film (directed by Robert Stromberg), with effects aplenty and grand flourishes of other-worldly architecture.

Storywise it’s feathery fluff, which no doubt accounts for the film’s comic bent and amped up performances, especially from Pfeiffer who puts so much ham into her role she could have sliced some off for lunch.

Given that Maleficent 2 is essentially another mega-serving of fantasy pulp, its two-hour running time does stretch the friendship a tad.

Still, there is enough flash and dazzle and digitally rendered beauty to keep the affair afloat, the inclusion in the cast of two of filmdom’s most beautiful women adding not insignificantly to the film’s appeal.

As far as mystery thrillers go this taut, twist-laden effort has a heck of a kick-off.

Five years after the Prom-night death of her son Ronnie (Connor Jessup), a still-distraught Charlene Chase (Amy Ryan) get a singularly unwelcome visit from Melissa (Margaret Qualley), his girlfriend at the time.

She’s heavily pregnant and worried about Charlene. Her plot-propelling announcement? The baby she carries is Ronnie’s.

With revelations at every turn, director Rowan Athale and writer Eric Garcia prove themselves dedicated to unpredictability, with each scene designed to have you guessing how it will plug into the increasingly bizarre story.

The first-class cast also includes Greg Kinnear, Brian Cox (one of the most versatile character actors working today), Blythe Danner (Gwyneth Paltrow’s mum) and up-and-comer Margaret Qualley, who was so good as flirtatious hippie girl Pussycat opposite Brad Pitt in Quentin Tarantino’s Once Upon a Time in Hollywood.

Ameena (Danielle Horvat) is a young, angry Muslim school girl with a lot on her mind and a head full of pontificating poetry, which she delivers to appreciative audiences at the suburban venue near her Sydney home.

After a fiery performance one night she fails to return home and the alarm is raised. Her mother Rana (Darina Al Joundi) is beside herself with worry while her cafe-owning brother Ricky (Adam Bakri) becomes consumed over whether his sister has been kidnapped or has turned terrorist and gone to the Middle East to serve as a war bride. He inspects her online profile, which only confuses him further.

As luck would have it, at the same time every media outlet is full of news about an Australian pilot who has been taken prisoner by ISIS, and how official pleas for his release are matched by threats of his impending execution.

The media promptly knits together the two news events to form a single, convenient narrative that casts Ameena as a betrayer who has fled Australia to support her terrorist allies. This wreaks havoc on Ricky, his mother and his pregnant wife (Rebecca Breeds), who become media targets.

Amidst all this is lonely police officer Joanne Hendricks (superbly played by Rachael Blake), who is trying to deal with her own domestic turmoil while investigating Ameena’s disappearance.

Without descending into hysterics, Sydney-based writer/director Partho Sen-Gupta does a fine job detailing how promptly fear and suspicion can be coaxed used to promote an official agenda. It’s a strong-minded, subdued film that bravely confronts the politics of grief and how that can shape the perception of events.

The only arguable flaw with the film is that it goes on for exactly two scenes too many. The film hits a natural ending, then persists with articulating things that have already been clearly stated.

That sizeable quibble aside, Slam is the latest in what is turning out to be a great year for Australian film. The only pity with the film is that it has slipped into release without a ripple, and will no doubt slip out of release in much the same manner.

Thankfully, that has happened less than is typical this year, but it still happens far too often.