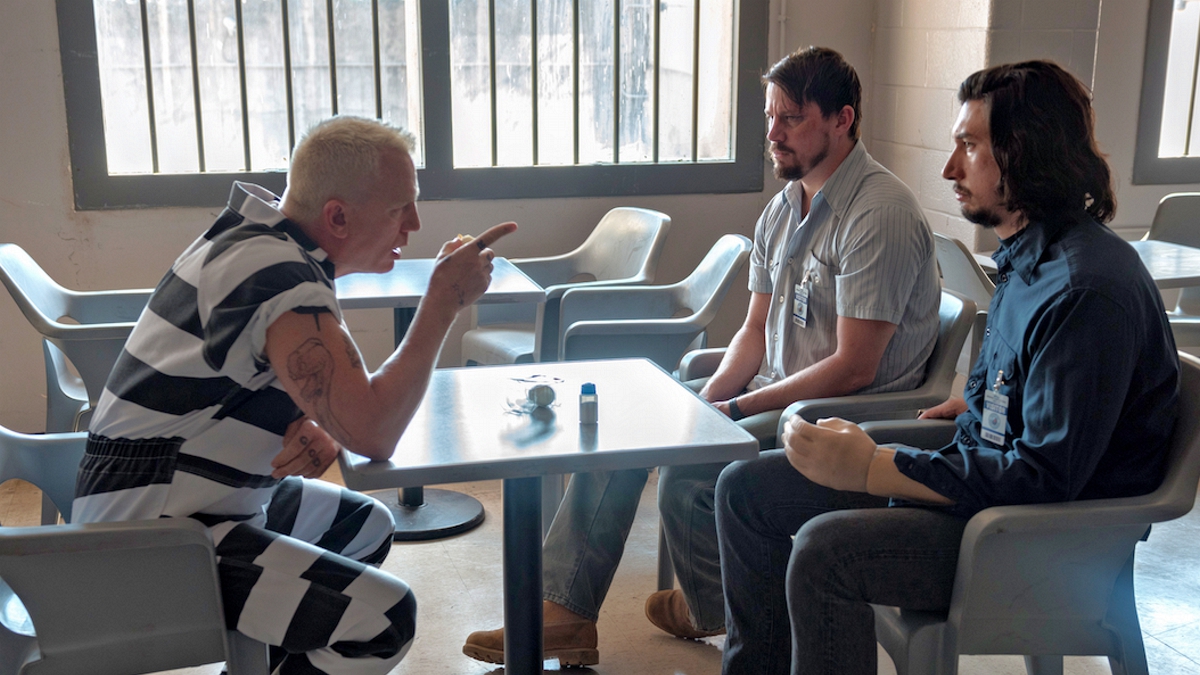 PHOTO: Brains Trust meeting: Daniel Craig (left) meets up with Channing Tatum and Adam Driver for a heck of a heist in the funny caper comedy Lucky Logan.

LOGAN LUCKY *** (118 minutes) M
What starts out as Dumb and Dumber Rob a Bank quickly upshifts into a snappy heist caper film about a small gaggle of rednecks with questionable IQs who plan to rip-off the local Nascar event. Channing Tatum chimes in as the likeable lead lunkhead with an improbably ingenious scheme to siphon money as it travels through underground suction tubes.
Directed by the infatiguable Steven Soderberg, the film is intended as a backhander to the director’s own Ocean’s 11 trilogy, which were all glossy, hi-tech, largely unfunny and totally lacking in ideas. Logan Lucky certainly provides an entertaining counter punch, with terrific support from Adam Driver (playing Tatum’s brother) and Daniel Craig.
There’s also some neat moral framing to the heist, with two of the gang members refusing to take part in the crime unless the can be given a rationale that is consistent with their convictions. (A nod here to the premise of  Going in Style, surely.) It’s a clever, Coen-style means of giving the caper some dramatic weight without slowing the proceedings down.

HAMSTEAD ** (103 minutes) PG
Much as we love romantic comedies about older-age couples, this over-formulated dollop of treacle makes you pine for the hijinx of It’s Complicated.
Wisenheimer Diane Keaton is the freshly widowed out-of-place American living in the verdant charm of Hamstead, a postcard pretty corner of the English countryside with a cosmopolitain air and a lot of concern over property values.
Enter the redoubtable Brendan Gleeson as a tramp who takes up residence in a shack on the grounds of a mansion set for redevelopment. After a sufficiently cute meet-cute between the two the film goes through the motions of middle-aged romance as the couple learn to love each other through the process of renovation.
Gleeson is always a pleasure to watch, but while Keaton tries hard to revive her Annie Hall sass, the performance doesn’t quite tap into that naturalistic flair for comedy that made her such a brilliant foil for Woody Allen back in the 1970s. Pity.
A pleasant-enough time killer.

THE DARK TOWER *1/2 (95 minutes) M
As unquestionably briliant as author Stephen King is, do you ever get the sneaking suspicion that, on occasion, he churns out something outlandishly silly, just to see how far it will go?
Then again, in the case of The Dark Tower, it might just be a case of something essential getting lost in the translation.
Based on a series of books he began in the 1970s, the film’s loopy premise involves a gigantic tower that protects humanity from the evils of the universe. Now, the only thing that can destroy it is the energy inside a special child’s mind. Got it?
In search of such a child so as to destroy the Tower is a Satanic dude in a cool coat played by Matthew McConaughey. (Why doe the Evil always have the bext stylists?) Keen to destroy him is an inter-dimensional “gunslinger” played by the increasingly overrated Idris Elba.
In between them is Jake (Tom Taylor), a New York teenager who has nightmares about the Tower and those seeking to destroy it.
With the aid of a some interdimensional portals, Jake travels in time to future earth and encounters these adversaries who engage in a series of murky, sloppily edited shoot outs.
To his credit, McConaughey uses his looks and dimpled charm to good effect to conjure a sleazy kind of devil who can kill people with words. But it’s not enough to make up for the film’s mordant, apocalyptic tone, which has become something of a cliche over the past few years.
So too, New York, which now seems to be the go-to destination for any movie looking to end the world in a blizzard of expensive, unimpressive visual effects.

I AM NOT YOUR NEGRO
This blistering look at the Civil Rights movement through the eyes of campaigner James Baldwin cross cuts between the grainy images of the day and those of today, underscoring how little appears to have changed. There’s no narration or tub-thumping, just a sober sizing-up of the movement as it was then, and the echoes that have reverberated across the decades to present-day unrest. A neat segment passes controversial judgment on iconic films such as Uncle Tom’s Cabin, Guess Who’s Coming to Dinner, A Raisin in the Sun, The Defiant Ones and In The Heat of the Night.
Screens: Saturday 4pm Comedy Theatre

CITY OF GHOSTS
Outstanding, disturbing documentary that takes us inside the Syrian city of Raqqa to show what life under ISIS is like. Risking their lives at every turn, a group of citizen journalists known as Raqqa Is Being Slaughtered Silently pull every trick they can to get images and stories out about the oppression and atrocities being committed. Filmed largely in secret. Warning: contains footage of actual executions.
Screens: Sunday 20 Aug 4.15pm, Hoyts Melbourne Central

A GRAY STATE
At some point in making his deeply political action movie Gray State, director David Crowley lost the plot. A veteran of the Iraq war his passion and focus slowly gave way to an insular state of mind that lead to a sudden, bloody tragedy. Using lots of unsettling video diary material, this extraordinary documentary tries hard to nail what happened to Crowley and his family, raising some disturbing questions that have even more disturbing answers.
Saturday 19 August, 9pm, Hoyts

AUSTERLITZ
Likely to be one of the most bizarre Holocaust documentaries you ever see, director Sergei Loznitsa visits Auschwitz and trains his camera on the crowds that flock to see the remnants of the Nazi death camp and the memorials that have been erected to the murdered. A quietly absorbing tract with no intended message, other than to show how popular the place is, how respectful the tone is and how young many of the visitors are.Screens: Sunday 20 August, 1.45pm, Kino

JUNGLE
Wolf Creek director Greg McLean comes up trumps with a knockout survival film about four guys who get lost in the beautiful but dangerous Bolivian jungle. Starring Daniel Radcliffe as Yossi Ghinsberg, on whose book the film is based, the film is absolutely straightforward with virtually no plot other than the primal need to make it out alive. McLean builds tension incrementally as the friendships that initially bind the quartet begin to fray and the adventure ferments into a nightmare. Terrific stuff.
Screens: Sunday 20 August, 4pm, Kino