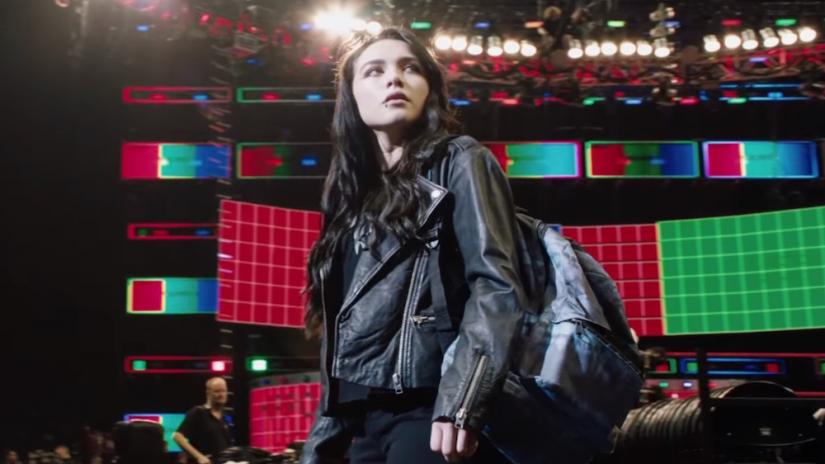 In what can best be described as a heart-warming, uplifting, reality-based Rocky for girls, we bear glorious witness here to the inspiring, hurdle-strewn journey of a feisty lass from a wrestling-loving Norwich family who is recruited by the WWE wrestling megalith as a hot prospect.

Paige (Florence Pugh) has a lot of raw instinct for the game – and everyone in the film knows it’s a game, staged for entertainment – but she still lacks manners and social skills, knocking heads with her trainer (Vince Vaughn) and alienating herself from her flighty blonde colleagues, who she mistakenly thinks are airheads with nothing to offer but their looks.

Paige’s hubris doesn’t match her performance in the ring, either, a challenging fact that fills her with doubt and the morbid fear that she might have more hot air than talent.

Self-respect and the need to respect others by looking beyond one’s own prejudices are the values underpinning the action, antics and heart-string pulling. Sports movie tropes all of them, and very well deployed.

With his Tooth Fairy co-star Dwayne “The Rock” Johnson in fine form, director Stephen Merchant – best known as co-creator with Ricky Gervais of The Office & Extras; he also made the underrated, single-season show Hello, Ladies – proficiently presses all the right buttons, delivering a touching finale that Sylvester Stallone himself would be proud of.

In all, a terrific family entertainment as well as a winning “girl empowerment” movie.

Likeable Welsh comic and character actor Rob Brydon – Steve Coogan’s mate in the Trip movies; host of Would I Lie to You? – does a convincing job playing Eric, a suburban sad sack accountant whose marriage to a successful local politician (Jane Horrocks from AbFab) is on the rocks. So, too, is his relationship with his son.

A dedicated swimmer, he finds solace and friendship with an ad hoc synchronised swimming team, made up of middle-aged men with far from photogenic physiques.

They joke, fight, can’t seem to get their routine right until Eric joins and applies mathematics to their moves. The inevitable male bonding occurs, which is sweetly handled, even though some of the dialogue is a tad over-baked.

Though the club is intended to provide its members with an escape from everyday stress, for Eric it provides the confidence to face the strains in his marriage, some of which are self-inflicted.

Directed without any pretense by Oliver Parker (Dad’s Army; An Ideal Husband) and obviously made on a very low-budget – the Olfi action cameras used in the pool scenes are sub-Go Pro units – Swimming With Men is a very easy-to-watch comedy, very much in the tradition of those Ealing comedies that celebrated the English character ever-so-subtly.

The Lego Movie 2 is the fifth movie in the Lego Movie franchise, which includes the post-Lego Movie movies Lego Batman and The Lego Ninjago Movie. That’s one a year since the franchise began in 2014, so…too much?

Well, perhaps not too much, but that’s certainly a lot of cinematic Lego. And while the reference-filled dialogue delivery is as slick as ever in the latest flick, the tarnish is really starting to show, with fewer big laughs and some surprisingly average visuals.

Yet while the novelty has largely worn off, the adventures of Emmet (Chris Pratt) and Wyldstyle (Elizabeth Banks) still move swiftly, and into a new dimension, no less.

Stuffed with kinetic music, the film features a new earworm anthem called Everything’s Not Awesome and a slightly bizarre closing credits sequence that runs for about 15 minutes.

You can’t help but notice the stamped-out feel of the film, yet while it shows all the signs of sequelitis (repetition; concept fatigue) it, like many ho-hum franchise films, still manages to keep bordem at bay.

Kids, of course, won’t really care much about any of this. The film has thus far taken north of $US170m worldwide, which is behind the totals of Lego Movie ($470m) and Lego Batman ($312m), but none too shabby.