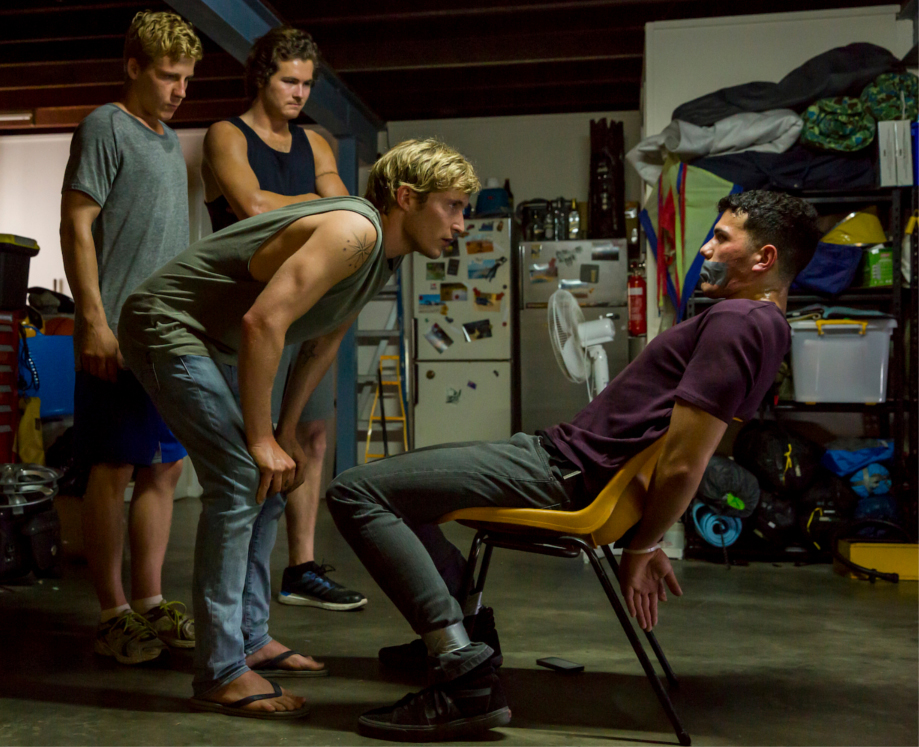 Pic: Got something to say?: Sean Keenan puts in a powerful turn in the compelling local drama Australia Day.

The darker side of human nature, and of the Australian character, get a searing going over in this outstanding, topical, compelling drama designed to make you feel and think deeper about the underside of Australian life.

The film, set in suburban Brisbane on a typically sunny public holiday, begins with three people running, presumably for their lives: an indigenous girl (Miah Madden) is fleeing a car accident that occurred while she and her sister were escaping an abusive household; a teenager (Elias Anton) suspected of raping a girl is desperately trying to outrun his accusers; and an Asian girl (Jenny Wu), who speaks no English, scrambles down the street before being rescued from her pursuer by an elderly farmer (Bryan Brown) with big troubles of his own.

This trio of stories run in carefully measured lock-step, with the pitch building slowly and steadily across all three until we hit the crescendo and they all deliver powerful emotional payoffs. There are structural similarities with Robert Altman’s Short Cuts and thematic ones with the Oscar-winning film Crash, to be sure. Those influences are clear to anyone who knows their movies, yet the film carries its own distinct flavour and voice.

Australia Day is superbly directed by Kriv Stenders, most famous for the Red Dog films, of course, though this film has more of the sensibility of his smaller works such as Boxing Day. Given the discipline required to slowly tighten the tension across several narratives (including sub-plots) simultaneously, it’s easily one of the best directed local films in a while. Kudos also to screenwriter Stephen M Irwin who wrote the upcoming TV version of Wake in Fright, which was also directed by Stenders.

We often complain, with good reason, about Aussie films that feel like they haven’t been fully developed. That’s definitely not the case here.

Australia Day is a full-bodied, three-dimensional character study that explores some of the dimmer corners of the Australian soul and our ability to either not listen – farewell the “fair go” ethos – or to, worse, turn our backs and dial our compassion down to zero.

Performances throughout positively breathe with conviction. The latter-day Brown now has life etched in his face; Shari Sebbens (The Sapphires, Redfern Now, Black Comedy) is terrific as a guilt-ridden cop with a wrong to right; and Sean Keenan (Puberty Blues) proves just how far he’s come from Lockie Leonard with a powerful turn as a very angry young man.

Regrettably, Australia Day is likely to be yet another local film that breathes twice at the cinemas before disappearing into the abyss. It’s slated for a two-week cinema run on about 11 screens and will be available after a week on Foxtel and Dendy VOD (video on demand) platforms.

Hopefully the film will get the audience it deserves in the stream and it’s great that it’s getting such support.

Still, it begs the question: what is wrong with our film industry that such a good film with such a strong pedigree gets such a scant theatrical release? We all know that if the film was American it’d be getting a bigger release and take $5-10 million at the local box office.

There’s clearly something amiss with this scenario.

More of the same over-blown action-comedy nonsense here as Taron Egerton and Colin Firth return as the well-mannered, tech-powered “gentlemen spies” who skip-step their way through a typically preposterous yarn involving a plan to destroy humanity with a virus.

Fans of the first film will be duly served with lashings of well-staged action – returning director Matthew Vaughn knows better than to mess with a winning formula – but while the novelty might have worn off, the gag and gadget quotient remain surprisingly high and we get a truly wonderful villainess courtesy of Julianne Moore. She’s a ditzy, deadly bad girl living in a 50s-styled lair in the South American jungle who likes seeing her henchmen prove their loyalty in extreme ways. It’s a delightful treat that helps propel a satisfying, if slightly overlong slice of franchise fodder.

The law of diminishing returns continues to take its toll on the Lego franchise here as Lego’s Ninjago TV series (now in its eighth season) gets the big-screen treatment.

The cute self-referencing that peppered The Lego Movie (2014) and Lego Batman (2017) goes into overdrive in Ninjago, so it’s likely to wear thin very quickly on adult ears.

As with the other films, the venture is about 20 minute too long and, to be honest, the visuals aren’t all that swish. Part of the charm of the early Lego films was using digital animation to replicate that charming stop-motion look. Here, they haven’t really bothered with that, so the block figures move around far more fluidly than they should. Call it the Lego version of the Uncanny Valley effect.

Designed as a kid shutter-upper, the story involves the evil Lord Garmadon (Justin Theroux) reconnecting with his son Lloyd (James Franco) whose job is to destroy him.

It’ll be interesting to track how this film ventures at the global box office given that Lego Batman cost much more than Lego Movie ($US80m vs $US60m) and made much less ($US312m vs $US470m). The audience might well be satiated by the time Lego Movie 2 arrives in 2018.