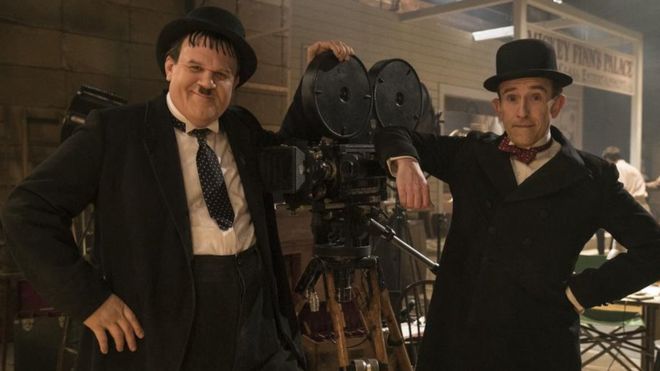 Oh, what a glorious, fun, enjoyable film this is. Both a celebration and lamentation about one of the great comedy duos of the 20th Century, Steve Coogan and John C Reilly play Stan Laurel and Oliver Hardy respectively and respectfully in one of the best films we’ve had so far about the dizzying highs and sobering lows of show business.

When it comes to biopics, some films bravely – often foolishly – try covering as much of a person’s timeline as it can cram in. This can work (Ray) but it can also result in an episodic work (The Iron Lady), owing to the filmmakers biting off more than they can cinematically chew.

A more level-headed approach is to focus on one crucial part of a life and build the story out from there. That’s the model writer Jeff Pope (who co-wrote with Coogan the Oscar-winning adapted screenplay for Philomena) and director Jon S Baird (Filth) subscribed to for Stan & Ollie and it works a treat.

Though the height of Laurel & Hardy’s movie fame was in the 1930s and 40s, the film takes us – after a magnificent opening single-take shot – to 1953 England, many years after the pair were thought to have retired.

Both are in desperate need of money thanks to hefty alimony payments and a cruel studio contract with Hal Roach (a sneering Danny Huston) that denied them a decent share in the huge grosses their films made at the cinemas.

We find them older and only slightly wiser, caught in the doldrums of post-fame life where their names draw thin houses at the dingy music halls they are forced to play.

Their dream is to use the success of the tour as leverage to make one more film and so, hopefully, revive their careers. As the tour gathers pace the audiences pick up, offering the duo a sweet taste of the adulation they once took for granted.

But is their partnership a friendship or just a business arrangement?, the film dares to ask. Combined with the ravages of age, ill-health and long-held jealousies, the pair squabble to the point of breaking up.

The film takes flight from the first minute thanks to the stellar performances by Coogan and Reilly who inhabit their roles with remarkable authenticity (thanks partly to some splendid make up, with Reilly apparently spending two hours a day getting prepped.)

Fans of the pair and of the period will clearly get the most from this lovingly made, if barbed, valentine. If there is one major criticism of the film it’s that it doesn’t do enough to place Laurel & Hardy in a wider historical context.

An example of this is the brief shot we get of a down-trodden Laurel looking up at a movie poster for Abbott & Costello, who were monstrously huge at the time.

The prickly point being made, presumably, is that while Abbott & Costello made inferior films they were smart businessmen who got a big slice of the grosses their films generated. It’s a moment that should have been much better explained.

Nina Arianda and Shirley Henderson provide strong support as Laurel and Hardy’s respective wives, their concern for the welfare of their stressed-out husbands overwhelming any concerns about losing their wealthy lifestyles.

With terrific period recreation serving as a backdrop – something the Brits seems to be very adept at, thanks to their heritage-conscious culture and love of preserving their nation’s provincial charm – Stan & Ollie is great entertainment, a bitter-sweet tribute to a beloved duo whose legacy is clearly determined not to fade if the passion of this film is any guide.

It’s no put-down to describe as indulgent any film based on the director’s personal experiences or reminiscences – provided, of course, that such indulgence is done well and with an audience in mind.

In Roma we have the case of director Alfonzo Cuaron not only reminiscing well on the big screen, but doing so superbly and in a manner that gently draws you into an intimate domestic world.

Rendered in crisp black and white and set in Mexico City in 1970, the film focuses on Cleo (Yalitza Aparicio), the live-in maid of an upper-class household.

It’s through her innocent, vulnerable eyes that we see events both large and small slowly unfold, from the never-ending chore of cleaning up dog droppings from the home’s enclosed driveway to a deteriorating marriage to a massive street riot.

The film has no conventional plot; Cuaron’s love of long takes – demonstrated so masterfully in Children of Men and Gravity – allows you to soak in all the subtly placed detail about the lives of these people. Cuaron, who managed the film’s cinematography, plays on that strange intimacy you feel when observing something closely, and from a discreet distance.

Through his understated use of the camera, Cuaron engineers some great cinematic moments, the most powerful being delivered via the slight turning of the camera. It’s a real heart stopper. Shan’t give it away here but don’t worry. You won’t miss it.

It really is an extraordinary touch, and though it might seem like a counter-Hollywood device it, in fact, honours the long tradition of sudden, skillfully set-up reveals favoured by such mainstream directors as Alfred Hitchcock, Robert Wise, Mike Nichols and Norman Jewison.

If anything, it would be great if Cuaron, who has long proved himself an able studio director (he also made Harry Potter and the Prisoner of Azkaban), might inspire other young directors to go easy on the convenience of digital editing and have more faith in their audience’s ability to absorb the invisible exposition and appreciate the grace of a beautifully designed long shot.

Though the film has been blessed with 10 Oscar nominations it has thus far had a very limited release. Chances are that even if it wins big, it will still play to a fairly small theatrical audience. (Be lovely if that turned out to be wrong!)

It is important to note, however, that Roma comes to us from streaming giant Netflix, which has its eyes fixed firmly on the home market, and Roma is the first such film to get such Oscar attention.

Hence, its ultimate reach won’t be judged by the usual standards, which will no doubt change forever post-Roma.

Good intentions and some impressive Outback photography can’t quite keep this  documentary about the long-standing tensions between indigenous folk and the mining industry from feeling like the rough cut of a one-hour TV special.

Locals relate their pungent tales of woe dealing with mining bodies, who bully and harass. There are some disgraceful anecdotes regarding the true value of land titles and one startling piece of footage shows an official walking around an indigenous property with an axe.

Battles are recounted with archival footage and injustices are dutifully chalked up. With the unfair, often alarming conduct covered, too little time is then given to the alternatives to hardline opposition, though there are hints of some.

Too many things are left too vague, such as the issue of post-mining land reclamation and the fair share indigenous people should receive when a multi-billion dollar mining operation goes ahead.

That a middle ground exists is hinted at, but never developed. For instance, one local now finds himself working for the very people he once protested, and with a positive attitude for his people and their culture. This, regrettably, is where the film ends. It would have made a much better starting point.

Stuck in the middle of a frozen wasteland a lone cargo plane pilot (Mads Mikkelsen) has a simple task: to survive until the final credits roll.

Crunching his way through thigh-deep snow, his largely wordless quest is aided by a plentiful supply of easy-to-catch fish that are readily available via holes he punches through the thick ice.

An obviously skillful pilot, he was also able to crash land his plane without rupturing the fuselage. This gives him weatherproof protection and a comparatively warm place to sleep.

On the downside, there’s a wandering polar bear and the pilot’s growing fear that the distress signals he cranks out with his emergency unit might not be reaching anyone.

At a critical point in his crisis he finds himself having to care for another soul who is actually worse off than he is. Consequently, our hero must decide whether trekking out into the blinding white badlands might be a better option than waiting around for help or for another visit from that polar bear.

The film does bear more than a passing resemblance to other recent survival films such as Adrift, Castaway and the superb Robert Redford film All Is Lost, perhaps reflecting the universal truth that when it comes to surviving in the wild, the elements can be as harsh as they are indifferent to the suffering of lost humans.

The film sits comfortably on Mikkelsen’s shoulders as he carries us through this odyssey of misadventure and misfortune. His claim that Arctic was the hardest shoot he’s ever done certainly shows on his snow-blasted face and the dogged, determined way he pulls a fully laden sled up a hill.

Fun fact: According to Brazilian director Joe Penna (a first timer) the film was originally set on Mars, but the advent of Ridley Scott’s The Martian kept the film Earth-bound, making them relocate from the desert to Iceland, which apparently turned on some real snow shows for the crew.