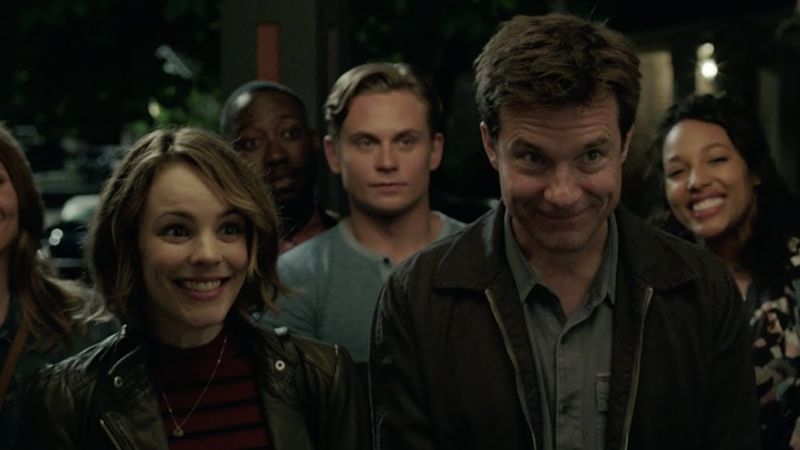 The Hangover and Fockers series proved their huge carryover popularity from the boom of the 1990s and Game Night faithfully follows the time-honoured, plot-propelled formula of characters caught up in situations that get well out-of-hand.

Max (Jason Bateman) and Annie (Rachel McAdams) are a cul-de-sac dwelling middle-American couple who like hosting social evenings with friends where they play games while sipping wine and munching on snacks.

The arrival of Max’s egotistical brother Brooks (Kyle Chandler) reignites his life-long inferiority complex and raises his anxiety levels. This, in turn, keeps him from impregnating his wife.

A night of misadventure, street chases and mild violence kicks in when Brooks decides to host a special host-your-own-murder-type game night, the twist being that nobody knows whether what is happening is real or not.

After a deliberately slow start directors John Francis Daley & Jonathan Goldstein (working from a screenplay by Mark Perez) hit the accelerator once the game’s first victim – or should that be “victim”? – hits the floor. It’s all go from there.

One of the measures of a good comedy is whether it can make death funny, and Game Night features one of the funniest movie deaths since the lawyer on the toilet bought it in Jurassic Park. It’s a hoot.

A sweet rom-com for the “young at heart” – a rather tired but popular euphemism meaning “the elderly” – sees Sandra (Imelda Staunton), a loyal and wealthy wife, thrown into latter-life singledom when she discovers her husband has been having an affair.

Now living with her sister in a tiny flat, Sandra slowly moves out of her morbid mood by reluctantly turning the crank on her social life.

This involves joining a seniors dance group at the local hall and meeting a barge-dwelling sweet talker (played by the great Timothy Spall, who is now about half the size he was in all those Mike Leigh films).

Director Richard Loncraine (a versatile hand who has done everything from Band of Brothers to Richard III to Wimbledon) maintains an engaging warmth throughout the film, and while the romantic plot bubbles rather than boils, it’s certain a lot better than two recent attempts at the genre, namely Hampstead (with Diane Keaton) and Paris Can Wait (with Diane Lane). Finding Your Feet at least has a touch of believability about it.

Having to endure The BBQ really made it feel like old times – in the worst possible way.

Sitting in an empty cinema in a suburban multiplex as this dire Australian comedy unspooled, your humble reviewer felt like he’d stepped into a time machine and was now back in the bad old days of the 1980s when so many Australian films weren’t just dreadful they were barely watchable. (And sometimes not even that.)

In this discordant, incoherent mess of a film – it really does feel like the 1980s again – Shane Jacobson plays Dazza, an all-Aussie bloke’s bloke who loves holding backyard barbeques. But hang on! Some tucker’s gone off and the guests have come down with food poisoning! Cue shots of people groaning and vomiting. Ha ha! It’s an event that even – somehow – makes the TV news.

Dazza’s wife (Julia Zemiro) is fed up and wants Dazza to quit it with these BBQs and spend more time with her and the kids. He agrees – yet a new challenge beckons.

As the best salesman at the local Barbeques Galore outlet, Dazza is directed by his boss to represent the company in a big BBQ cooking contest. For this he must undergo training with a master cook called The Butcher (Magda Szubanski), a Scottish blowhard with a perfectionist mindset.

Now, where to begin with how bad this film is?

In the interests of brevity, most of the film’s woes stem from one main problem: it has no frigging idea what it is trying to do.

Say what you might about even the coarsest American comedy, the one thing the Yanks have long nailed is the comedy principle that, however whacky the story gets it must remain grounded, with at least one foot planted in a reality people can recognise.

This ensures that the basics of the story are believable, that the world in which the story exists is consistent and that all-important comedy logic applies.

There’s none of that in The BBQ.

There are so many glaring inconsistencies it hurts the brain to contemplate that, once again, we’re looking at yet another Australia film that was a few drafts away from being filmable.

Example: after Dazza is made a public laughing stock on TV by being branded “Meathead” why would his company then want him to represent it? In fact, why isn’t he fired? Wouldn’t the TV people mention – rather prominently – who he worked for? And how did the event get on TV in the first place? And if Dazza has only ever used his backyard barbeque how can he be such a great salesman?

And, by the way, where is the internet in this world?

Like too many Aussie film comedies, such as last year’s terrible Three Summers, the film opts for caricature instead of character and winces away from anything mildly transgressive.

Another example: the film makes a joke about Dazza’s daughter being a social justice warrior, yet the story – again, much like Three Summers – has got SJW blandness all over it.

One of the main strands in the film is Dazza’s claim to be related to Captain James Cook, a fact of which he is supposedly proud. He’s built a replica of The Endeavour in his yard and has Cook on his BBQ apron.

This doesn’t sit too well with his indigenous guests, who get to quip about it without fear of any snap back. Why not?

And when an investigation into Dazza’s lineage is conducted it doesn’t feed into anything remotely comic. In other words, it’s just not funny.

One could go on and on. Why is John Stanton, one of Australia’s great character actors, so badly wasted here? Why isn’t Magda Szubanski as funny as she once was? And whose bright idea was it to cast Manu Feildel in the film as an annoying French chef? For those who don’t know, he’s one of the judges on the hit TV series My Kitchen Rules. So what’s he doing here? Is this really meant to be stunt casting?

Now, director Stephen Amis (The 25th Reich) is credited with four other screenwriters – Tim Ferguson David Richardson, Serge De Nardo, Angelo Salamanca – for the film. Nobody who sees the film will be able to make head nor tail of that.

Despite the wreck that the film is, Shane Jacobson remains a comedy jewel thanks to Oddball, Charlie & Boots, his TV work on shows such as Hotshots, and, of course, the comedy classic Kenny.

He is presently working on a new film with brother Clayton Jacobson (who directed Kenny) in a black comedy called Sibling Rivalry. Here’s hoping the comedy gods preside over that project with greater care than they did with this.

Aussie actor David Wenham tries his hand at directing here and the results are aimless, dull and starved of ideas.

The story, if you dare call it that, involves two young, attractive people – Jasper (Benedict Samuel) and Viv (Emily Barclay) – who bump into each other on a Sydney street.

Viv’s phone is damaged during the collision and must be repaired as she is flying to London the next morning to hook up with her fiance.

Then, for some bizarre reason that is not even hinted to at any juncture in the movie, the two decide to spend the night together. Not in any interesting way, mind, but just by walking around the town, eating, drinking, checking out the night life and revealing next to bugger-all to each other about their lives.

The big failing of this flaccid film is that the flimsy premise is given no life. The banter between the couple is stilted and forced. There’s no modulation or cadence, no sense of a developing relationship.

There is never a sense of two different lives randomly colliding and then finding some connection. Viv and Jasper don’t come across as human beings with rich backstories, but as two actors with no prepared script trying to improvise their way through a dramatically hollow film.

The film was apparently shot in 11 days and relied on improvisation to fill out its narrative, an experimental approach at movie entertainment that totally fails.

If seasoned actors like Wenham – a fabulous actor, no risk – wish to make experimental films and horse around with improvised acting techniques in front of a loaded camera that’s fine. But if the intent is to then release the end-product to the public and charge money for admittance the enterprise should at least be conducted with a market in mind.

While it’s tempting to compare the film to Richard Linklater’s Before Sunrise movies, it’s a spurious exercise because at least the couple in those films (played by Julie Delpy and Ethan Hawke) came up with more interesting things to say as they tried figuring out whether to sleep together.

And to cite just one example that underpins how irritating and hollow Ellipsis is, consider Viv’s situation for a moment. For somebody who is taking a life-changing international flight the next morning, she seems supremely relaxed and totally untroubled by any pre-flight jitters or even the need to get a good night’s sleep.

And Jasper, being the dullard that he is, never twigs.