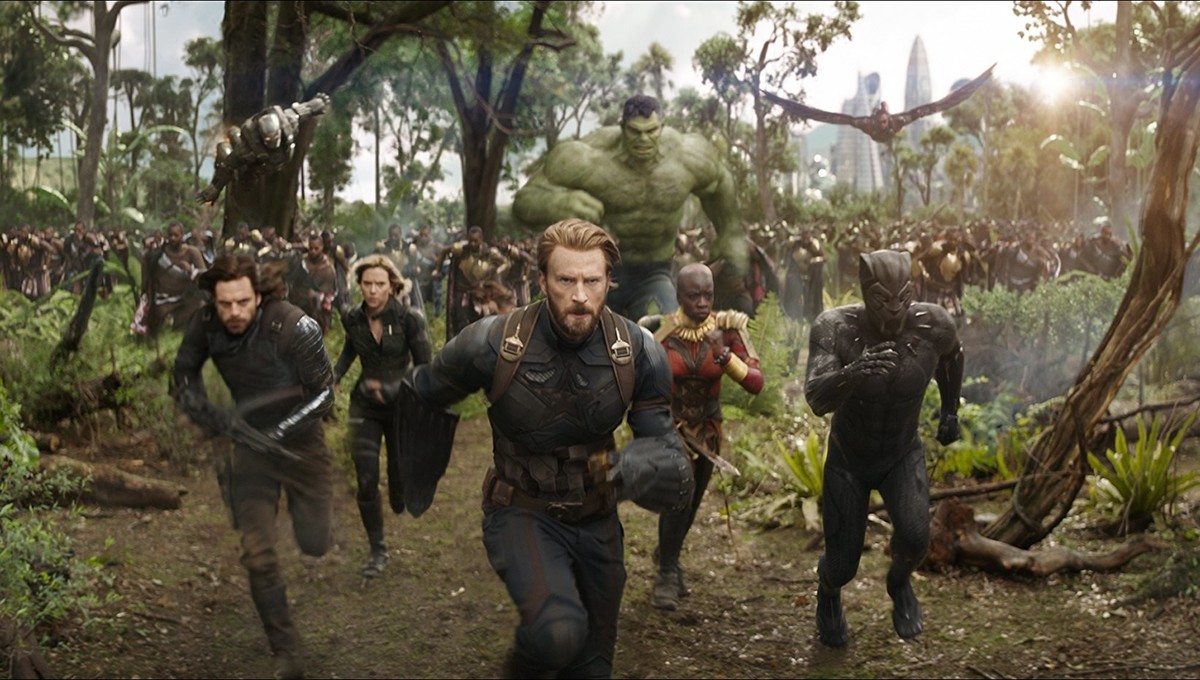 Pop open a bottle of soft drink in celebration because it’s time for yet another noisy, visually overloaded superhero block party as a sizeable gaggle of franchise-leading characters, and some supporting players, band together to fight a common enemy intent on taking over the universe.

Thankfully, this $300 million entry into the Marvel comic-book movie universe is one of the better films pumped out by Marvel Studios and certainly makes up for the tornado of dung that was Avengers: Age of Ultron.

There are literally scores of sub-plots here ensnaring all the superheroes you’ve come to either love or tolerate.

Yet while there’s a lot going on between these folk as they fly, fall and fight about causing all manner of property damage,  the movie’s main story is quite simple: Thanos – a giant, big-chinned, motion-capture creature voiced and performed by Josh Brolin – wants to take over the universe and rule it in his own special way.

To do this he must obtain six “infinity stones” that were created at the birth of the universe and insert them into the knuckles of a gauntlet he wears on his left hand. These stones will give him unassailable power. The task of our superhero chums, of course, is to stop him, regardless of the film’s visual effects budget. Many battles on earth and in space ensue, all splendidly rendered with the degree of sensory assault we’ve become used to.

Now, while Thanos is the villain of the piece, he’s not exactly evil. Thanos even comes with a good dose of pathos. His plan for ultimate domination of all creation has a hazy rationale to it, even though it involves a lot of death. He even has family issues. He’s not your standard-issue bad guy and helps ground the film emotionally.

This central idea also anchor the film’s swirling visuals, which take place on the usual epic scale, often reaching enjoyably absurd proportions. For instance, when Thor goes to get a new weapon – remember, the poor guy lost his beloved hammer – it requires more than an intergalactic blacksmith and an anvil. It involves a smelter the size of a planet.

Compared to the confusing muddle of many Marvel films (mainly the sequels in each sub-franchise), the story-telling in Infinity War is dispatched with surprising clarity so that each story has an emotional throughline.

This, and the surgically precise deployment of humour, results in a much higher level of engagement than we usually get. Directors Anthony and Joe Russo (You, Me and Dupree) have certainly built on what they did with the last two Captain America films.

Provided you visit the loo beforehand so your bladder can survive the 150-minute running time – and, as everyone now knows, you must wait till the very end of the credits before you can dare leave your seat – Infinity War is a very entertaining extra-large serving of super-sized 21st century multiplex fodder.

And it comes with a great closing hook. The film’s unusual and admittedly fabulous finale has drawn much discussion and some controversy for its alleged air of mystery and confusion.

Without giving anything away, there’s actually nothing all that surprising about it. Without exception, the chief purpose of these Marvel films, and the others of its ilk, is to keep the franchise going by maximising expectations for the next installment.

That, essentially, is all the ending here does, though in a way so clever it has prompted some to complain about the quality of the tease. It was, indeed, a risky way for them to go, but it works a treat.

Bring on the next one.

Having carefully steered him through the collapsing skyscrapers and tsunamis of San Andreas, director Brad Peyton now throws lovable muscle-head Dwayne Johnson into the world of genetic engineering gone bad as a giant ape and a giant wolf race towards Chicago, promising the type of car-twirling, mid-city mayhem common to all monster movies. A fun, largely nonsensical film; based on the old arcade video game (seen in the background early on), with good support from Naomie Harris and a very slimy Jeffrey Dean Morgan.

A conk on the head makes a self-consciously unattractive plain Jane (Amy Schumer) believe she is beautiful. As a result of the huge fate-administered confidence boost, her life immediately changes for the better in almost every regard even though she still looks the same to everyone else.

But she can’t stay in that mindset if the film is to have any real substance, or if she is to learn any sobering life lessons about the power of positive rethinking.

Similar in many ways to the Farrelly Brothers film Shallow Hal (2001), this is a well-meaning, well-done comedy about body image and self-respect that delivers its unfortunately timely message to young women with the subtlety of, well, an Amy Schumer comedy.

It’s ham-fisted, sure, but it works well. And while it seems fashionable at the moment to find any excuse to jump on Schumer, she deserves credit for producing a value-driven film consistent with her comedy and that dares to be positive about imperfection.

The nightmare scenario of being wrongly locked up in prison or, worse still, a mental asylum – anyone remember the ripper 2005 Adrien Brody film The Jacket? – gets a good going over by writer/director/cinematographer  Stephen Soderbergh in a nifty little shocker that plays like an extended episode of The Twilight Zone.

Taking a lovely left turn in her burgeoning career, Claire Foy (aka the Queen in the hit TV series The Crown) plays a young businesswoman with stalker problems who finds herself on the wrong side of a mental care facility. Co-starring Juno Temple and Amy Irving, the film was apparently made by Soderbergh who shot the entire thing on an iPhone 7 and in secret.

This no doubt accounts for the shaky light levels and saturated colours, yet the film’s sullen digital palette adds to the film’s dark mood.

A nice little thriller, this.