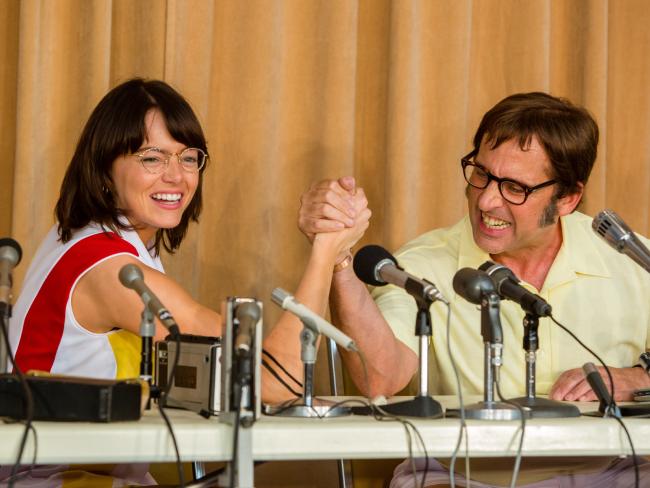 Gender wars: Tennis greats Billy Jean King (Emma Stone) and Bobby Riggs (Steve Carell) ham it up for the cameras in the splendidly entertaining Battle of the Sexes.

(Listen Below for Jim’s live to air review on Nightline)

The crusade for women’s rights in the 1970s found no better expression than in 1973 when the ageing tennis great Bobby Riggs, who was 55, challenged the 29 year-old Billy Jean King to an unofficial showdown on the court to establish, once and for all, which gender reigned.

Looking as though the film crew had hopped into a time machine and gone back to 1973, Battle of the Sexes is a superbly acted period piece with Steve Carell as Riggs and Emma Stone as King putting in Oscar-worthy turns as friendly adversaries each with their own points to score.

Shot on Kodak film and using 1970s movie techniques, this wonderfully entertaining, authentic-looking recreation of the event captures the feverish spirit of the time as the nascent, all-powerful medium of television fed a media circus that publicised the event to a national audience as a culture-shifting moment in modern history.

Counterpointing the comic dazzle and bombast – Riggs, a natural showman, was in his element claiming male superiority and embracing the term “male chauvinist pig” – are the motivating backstories.

Riggs, a gambling addict, is fighting to clear his debts and save his marriage, while King is confronting her status as a leader of the women’s movement as well as issues of her true sexuality.

Directed with equal measures of nuance and pizazz by husband-and-wife team Jonathan Dayton & Valerie Faris (Ruby Sparks; Little Miss Sunshine), the film wisely takes pause amidst the hyperbole to develop its characters and make the point that the game offered the first big chance for women’s liberation to get its first real foothold into popular culture.

The standout, though, is Australian actress Jessica McNamee who plays Aussie legend Margaret Court. Best known for TV shows such as Home & Away, Packed to the Rafters and White Collar, and films such as The Vow and Chips, here her good looks are muted, playing Court as a dry, determined woman who sees King as an unsavory type with loose morals. In a film with as big an ensemble as this, McNamee steals much of the film.

Visually, the film is simply delicious to behold. Shot on film stock, oozing with detail and reflecting the cinematic styles of the time, the film breathes with a 1970s sensibility from its costumes, its set design, its brands and its cinematography by Swede Linus Sandgren (Joy; La La Land; American Hustle).

Several filmmakers have noted the sweet irony of how the further they are from a given period, the better equipped they are to recreate it. Online resources allow for much deeper research while digital technologies can conjure sets and scenarios unconstrained by scale or physical expense.

Thus it is that Battle of the Sexes looks so good. It’s worth a repeat viewing just for that.

In terms of how topical this period film is now, much can no doubt be said about how the burgeoning women’s movement of the time reflects the continuing struggles of women today.

There is some truth to this, but it is limited and best not over-stated. Women in the developing world certainly have their work cut out for them. This film clearly speaks to them.

For Western women, however, the chief point of comparison is how feminism back then had a clarity and unity of purpose it doesn’t have now. If only today’s fractured, factionalised feminism could reach back and appreciate what can be achieved when women stand together for a common cause, not in opposition to each other for their own ones.