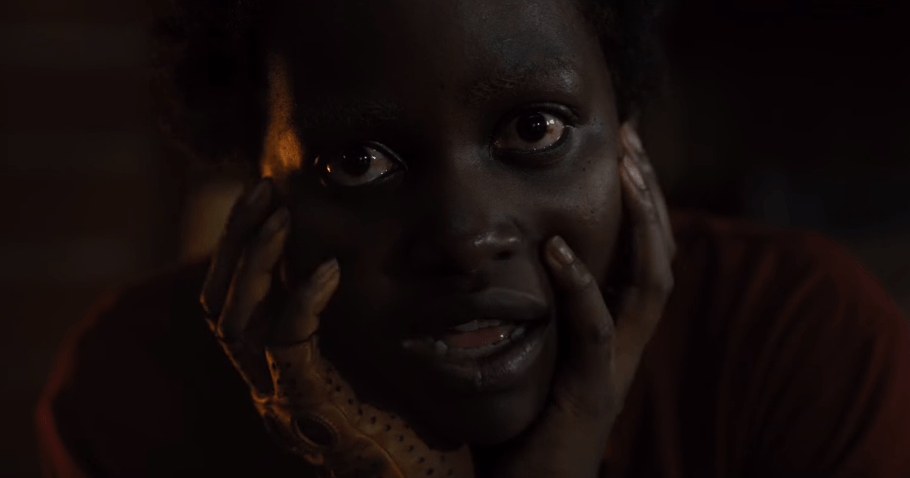 Well, so much for the alleged genius of director Jordan Peele.

After the hype and flukey, fly-away success of Get Out ($US255 from a puny $4.5m budget) comes Us , a horror mystery thriller that starts out fine before descending into the kind of pure gobbledegook usually seen in bad sci-films of the 1950s.

The basic premise involves a happy holidaying family who are visited one night by red jumpsuit-wearing dopplegangers who want to kill them with scissors. Turns out everybody is dealing with this issue, and as the sun rises the family finds itself facing a blood-soaked apocalypse.

Now, to give the film its due most of it is fine, unspooling as a proficient, 1980s-style horror film, with all the requisite gore and comic asides to keep you from taking it too seriously. The cast, lead by the luminous Lupita Nyong’o (12 Years a Slave, which won her an Oscar), jump into their dual roles with crazed, pop-eyed aplomb.

But the moment the mayhem stops and the waffle begins, you quickly realise that Peele wants you to take his B-grade splatterfest very seriously, indeed.

The first reel of the film is full of teasers about experimental rabbits, forgotten tunnel complexes, Biblical references and Hands Across America. All very cute. Yet the clumsy attempt to explain everything about what these killer dopplegangers are up to strays deeply into straight-out bad-movie territory.

It’s evidence that the disease of 21st-century post-content cinema has now infected the horror genre, where stories are either full of holes or simply make no sense.

Yet, pray, Peele has appeal, and the enthusiastic reaction to the riddles in the film – a big hit with a $US102m take thus far – has resulted in a wave of wild online speculation and laughably elaborate theories trying to decipher what the film means. (This also occurred to a lesser degree with Get Out.)

Watching these YouTube and Twitter videos makes for a deeply amusing postscript to watching the film. People have also embraced the film’s zombified dopplegangers – referred to as “tethers” – by adopting their look and gait for a bit of online cosplay. Funny stuff.

Perhaps this suggests that post-content cinema is breeding post-content audiences that are willing to not only overlook the shortfalls in modern movie storytelling but to engage with them, filling in the narrative blanks for their own amusement.

And it’s hard even for a hardened cynic to complain about that.

Stricken with cystic fibrosis and stuck in a hospital room that has become her home, teenager Stella (Haley Lu Richardson) makes a life-affirming point of strictly sticking to her routine of medications and treatments while hoping for a suitable lung donor to become available.

A few doors down, the very attractive Will (Cole Sprouse, aka Jughead on Riverdale) knocks heads with Stella, his view being that death is so close, why not tempt it with risky behaviour?

Clearly designed to replicate the weepie appeal that catapulted 2014’s teen cancer-romance The Fault in Our Stars to a $US307m take, Five Feet Apart is a very well-made heart-string tugger, blending the fast-talking, tech-savvy style of these new-century kids with the unapologetic old-school sentimentalism of 1970’s classic Love Story.

Directed with manipulative precision by Justin Baldoni, who drew on his experiences making the acclaimed doco series My Last Days, the film fashions its doomed romance drama with an emphasis on hope and how being denied a future can serve to strengthen one’s resolve to have one.

The grounded performances from its young leads give real resonance to the film’s emotional drive, with Richardson being especially impressive amidst the clinical hospital setting.

The film has been subject to objections from some with CF who accuse it of being exploitative of sufferers. That would have been a problem had the film mishandled the scenario, but as well as delivering an entertaining, engaging, tear-inducing story, Five Feet Apart raises awareness about a reality most people don’t know about.

It’s weird. None of these complaints were raised about Fault in Our Stars, or any other similarly themed dramas about teens in dire circumstances (A Walk to Remember, The Spectacular Now, etc).

Only in today’s point-and-accuse culture could spreading compassion and empathy be seen as problematic.

Disney’s latest live-action remake of a classic animated film is a largely lifeless, gloomy affair with little joy and lots of heavy-handed scenes about animal abuse and cold business ethics.

Drawing somewhat loosely on the immortal 1941 film, director Tim Burton – who turned the 2010 remake of Alice in Wonderland into a billion dollar hit – takes the story of the baby elephant whose big ears allow it to fly and weighs it down with painfully slow scenes and mawkish sentiment.

Fans of the original are in for a tough time. Not only is the feel of the remake mournful and the pace sluggish, the visual beauty – and terror – of the original Dumbo is totally supplanted by the tiresome need for digital animation to be so photo-realistic.

Put simply, the magic is missing. Chances are that when diehard fans see what Burton and his crew have done to the brilliant, nightmarish Pink Elephants on Parade sequence they might cry for all the wrong reasons. It really is a travesty.

Danny De Vito tries hard as the master of a dying circus, but neither he, Colin Farrell (as a wounded WW1 veteran) or the hapless child leads (Nico Parker and Finley Hobbins) can lift the film’s dull, lugubrious tone.

Here’s hoping the live-action makeovers of The Lion King and Aladdin are a little more up.