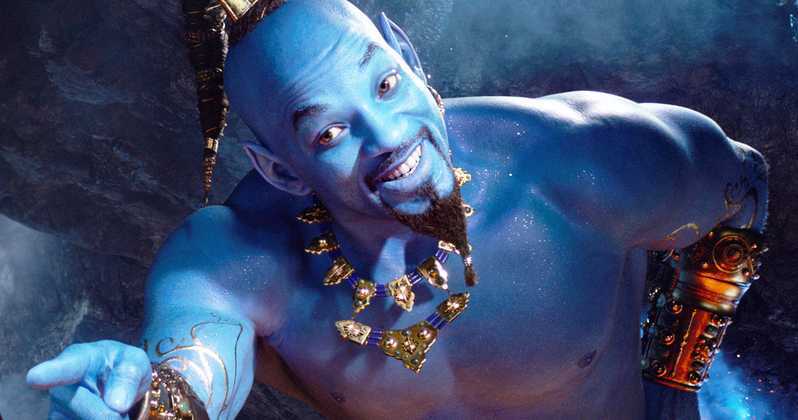 Once you get passed the rather obvious fact that Will Smith is no Robin Williams, Aladdin – the latest but not the last live-action remake of a Disney animation classic – unspools as quite a zesty, funny, family-oriented, visually delightful magic carpet ride through the tale of career thief Aladdin (Mena Massoud), his monkey accomplice Abu and his giant blue servant Genie (Smith), who he conjures by rubbing an oil lamp.

As anyone over ten years old should know by now, Aladdin finds the lamp at the request of evil guy Jafar, who is keen to use the three wishes granted by the genie to take over the local area and vanquish his many enemies.

But after being betrayed by Jafar – a right royal rotter played with slimy malevolence by Marwan Kenzari –  Aladdin takes possession of the lamp, hoping the genie’s powers can help the strong-willed, proto-feminist Princess Jasmine (Naomi Scott) fall for him.

Now, most right-thinking people would have been wary to learn that the director of Aladdin is Guy Ritchie, whose particular brand of gangsta machismo courses through films such as Lock, Stock and Two Smoking Barrels, Snatch, RocknRolla, Sherlock Holmes, The Man from U.N.C.L.E and the godawful King Arthur.

So, pray, what is he doing helming a high-end Disney fantasy musical where nobody is allowed to cuss, bash, slice, stab, shoot or otherwise kill anybody? Good question.

Though he has said doing Aladdin was principally to please his kids by making a family film, it’s a fair bet Ritchie also relished the career-boosting idea of broadening his palette by getting on side with the Disney megalith.

And, to his credit, he has done a proficient job that delivers on expectations and is careful to colour inside the borders.

Aladdin’s quest for love, Jasmine’s quest for respect and independence (the only major change from the original, and a good one), the Genie’s hopes for freedom and a mortal girlfriend all gel nicely and obediently. Just as the Genie must obey Aladdin’s commands, so too Ritchie’s direction is at the service of the Disney master.

Thus, the film never willfully moves out from the shadow of Robin Williams, as it knew it couldn’t. One suspects that was by decree. Williams proved his comic genius in his voicework for the 1992 film and for Smith to try and out-do him would likely have been as disastrous as some of Smith’s recent films.

Everybody associated with Aladdin would have known how the film would remind the audience of how funny Williams was, so why fight it?

There is a golden comic moment where it looks as though Will Smith’s Genie is powered by the same anarchic, rule-breaking comic adrenalin that Williams imbued with his blue-toned masterpiece.

Alas, it only lasts a moment. Nothing else comes close to what Williams did in the original film, who shamelessly filled Aladdin’s historical setting with anachronistic pop-culture references and improvised wit.

Still, while Smith can’t recreate the magic of Williams he does bring his own snappy, slang-filled charm to the Genie.

Coupled with the powerhouse FX Disney liked hard-wiring into these films, Aladdin makes for a good, satisfying family outing, even if the impulse immediately afterwards is to rewatch the original.

One of Britain’s titans of social realist cinema, Mike Leigh, offers a methodical, slow-burn, disturbing account of the devious politics that lead to the attack on peaceful demonstrators in Manchester’s St Peter’s Field on 16 August, 1819.

Leigh sets the scene with details designed to infuriate. Despite the victory at Waterloo the English landscape was seething with discontent over a poor economy, unemployment and bad government.

The toxic atmosphere and contempt for the common folk lead to talk of protest and rumours of rebellion, which the government was eager to suppress by whatever means necessary. That included armed soldiers charging on a crowd of thousands, killing several and wounding hundreds.

It’s a word-heavy drama, no doubt, but those attuned to Leigh’s cinema of discord and working-class anger will welcome it as one of his finest works.

Following the worldwide success of That Sugar Film – which had a measurable effect on public policies about the amount of sugar in processed foods – director Damon Gameau returns with 2040, an ambitious enviro-documentary that also hopes to impact public discourse, only this time about the fate of the earth rather than the sugar content of health bars.

Taking the future of his daughter Zoe as his cue, Gameau consciously pulls away from the pessimism and apocalyptic doomsaying hard-wired into so much of the enviro-debate.

Instead, he tasks himself – and his considerable crew of experts and visual artists – with constructing a positive, viable vision of what a sustainable, environmentally sensitive world could look like when his daughter turns 25 in 2040.

Wisely, his explorations, speculations and conjectures are restricted by the self-imposed discipline that they all need to be rooted in technologies and practices that already exist. A very smart move.

Illustrated by some engaging visual effects, Gameau covers a wide range of topics, some more convincingly than others.

The segment about de-centralised power generation really hits home in a way that excites common sense.

So too, his coverage of soil, seaweed and the education of women. Gameau really strikes a pleasant, persuasive balance between plausible worldwide solutions, economic sense and the allure of acceptable change that brings benefits to all, especially to those who are too used to going without.

As for other topics – hmm, not so much. The proposed advent of a meat-reduced diet, driverless cars – still a shaky proposition – and the virtual death of car culture do have a pie-in-the-sky feel about them.

Still, the film is full of food for thought, designed to ignite conversation and debate. As with That Sugar Film, 2040 has a strong educational component, with books, a website and lesson plans for schools.

Since the success of That Sugar Film, Gameau, who memorably played reporter Greg Shackleton in Balibo, has decided to give up acting and concentrate on making films.

Happy to be described as an activist-documentarian, conversation with Gameau makes clear the intensive amount of research he put into 2040.

Full of verbal footnotes and references, his love of science and for fact-based action is almost as obvious as his passion for sensible, sustainable environmental management.

Though clearly fatigued by a brutal press schedule, Gameau was kind enough to grant a sit down to discuss the issues in the film and his epiphany as a filmmaker.

The interview took place on Monday 20 May, immediately after the federal election, which saw the decisive re-election of the conservative Coalition, which has a less aggressive approach to climate change than Gameau and many – though obviously not most – people would like.

Though disappointed by the result, Gameau did not appear deflated. If anything, he seemed energised by the challenges ahead.

The interview was very lively and packed with information. Please enjoy.