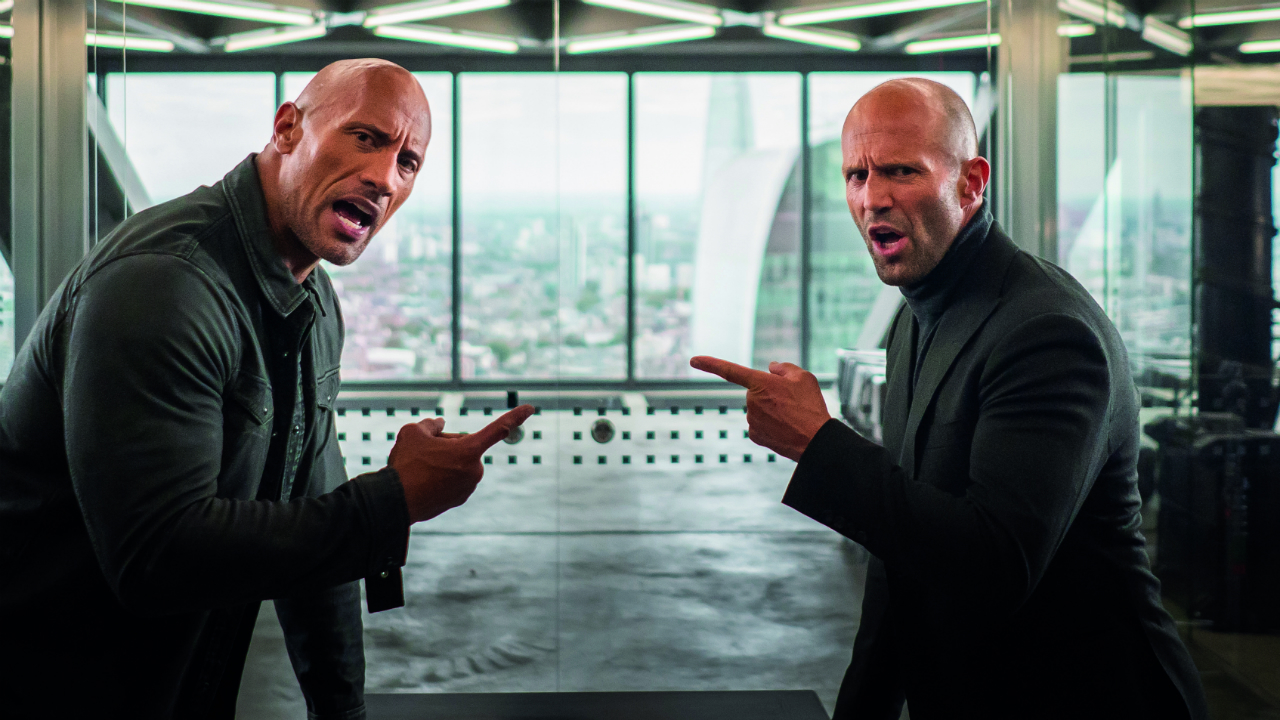 Little needs to be said about the first offspring of the multi-billion dollar F&F franchise other than that it is a very, very good movie, especially the action bits.

Mounted with that high degree of delicious preposterousness that has become the franchise’s signature, British agent Shaw (Jason Statham) and US agent Hobbs (Dwayne Johnson) team up to hunt down bad guy Brixton Lore (Idris Elba).

He’s a super-powered super-villain, part of a new breed of enhanced humans – think Iron Man crossed with The Six Million Dollar Man – who will take over the world once a specially designed virus has weeded out all the weaklings.

That virus is swimming around inside MI6 agent Hattie Shaw (Vanessa Kirby), who happens to be Shaw’s sister. Before the virus kills her, they need to extract it out of her by getting her to a special machine located in the heart of Bad Guy HQ.

There are a few scant moments in the film that do not involve high-speed chases, explosions, machine guns, fights, smashing glass, crashes or torture. An oversight, no doubt.

Still, we can forgive the filmmakers for those lapses and at least congratulate them for managing to shoe-horn in the bare minimum amount of characterisation, backstory and exposition necessary into the smallest possible space.

Indeed, we look forward to the day when one of these films are all-action from go-to-whoa without any pauses in the pace at all – and on that day we will see Michael Bay, who championed this style of action film, receive his long-deserved sainthood.

There is so much testosterone gushing around in this film you could go white-water rafting on it. The bonding between Hobbs and Shaw is accomplished through loving quips thinly disguised as insults where each appears to make fun of the other’s machismo.

Thankfully, underneath all the grunting and rustling muscles – Johnson’s physique is now so over-built his bulging neck appears to be wider than his head – the pair share a real comic chemistry. Cheesy as it might be, it helps paper over the loopiness of the plot – which feels like several 007 plots mashed into one – and makes up for how the film’s cartoonish tone doesn’t really allow any room for genuine tension.

That said, director David Leitch (John Wick; Atomic Blonde; Deadpool 2) mounts the film’s long series of action sequences with great sweep and proficiency, saving the best till last when the final stand involves forcing Hobbs & Shaw to face their well-armed adversaries with a major handicap, similar to what we saw in Skyfall.

But as Vin Diesel reminded the world when he reignited the F&F franchise with the fourth film, you can’t have all this mechanical mayhem going on unless there’s some heart there for people to relate to. Thus we have Shaw’s relationship with his sister and mother (Helen Mirren) and Hobbs’ need to provide his daughter with a family.

Everything clicks perfectly into place in this mega-sized action-comedy both for fans of the franchise and for those in need of a thunderous, undemanding time-killer with top production values and lung-shaking audio. The film was previewed in Imax and filled the screen splendidly.

In the midst of a deep winter chill a group of homeless people who regularly congregate in the Cincinnati public library decide to hold a protest by refusing to leave, all to the chagrin of subdued librarian Stuart Goodson (Emilio Estevez) who has enough on his hands.

There’s conflict with the politically driven DA (Christian Slater in a terrific turn) and confrontation with a distraught police negotiator (Alec Baldwin, in fine dramatic form) as the situation swells into a full-on movement, with the media breathing down everybody’s necks.

Estevez, who wrote the film, shows his flair for ensemble directing here, sculpting an affecting, unusual urban drama about the warmth of compassion in a cold climate. The film was made a few years ago and has slipped through under the radar. It’s a small gem of a film that takes a simple idea and gives it the oxygen and room to flourish.

Here’s a remarkable documentary about a remarkable woman, famous and highly praised in her time for being one of the pioneers of cinema in France and the United States, yet largely forgotten today, save for this deeply researched documentary that intends to correct the record.

In telling the story (via Jodie Foster’s narration) of how a lowly secretary saw the story-telling power of cinema in France, director Pamela B Green and her team construct a beguiling portrait both of the artist and of how she seemed to have been written out of history through a combination of carelessness and callousness.

As well as the testimonials from a slew of current filmmakers, Green injects a thriller element into the film by including her tireless hunting down of material and relatives, which has her criss-crossing back and forth across the map.

Snippets from those vintage films that have survived glow like beacons in the mist, throwing into focus what a prolific and adventurous director Guy-Blance was.

Despite what must have been a strong temptation, Green resists turning the film into a polemic. She merely makes clear the salient point that while Alice Guy-Blance was able to flourish in running a successful studio despite her gender, when it came to the recording of her accomplishments it was suddenly an issue.

Thankfully much of her material survives and Green re-assembles her life with deep respect and a palpable love for an artist who bypassed the dictates of convention and rewrote the rules to suit herself.

So, what does financially strapped mother Alice (Emilie Piponnier) do when she suddenly finds out she and her son are on their own as bad debts threaten to toss them out into the streets? In these allegedly enlightened times the solution – top-tier escort work – might not ring bells with third-wave feminists, yet perhaps director Josephine Mackerras offers a more liberating and confronting view. A terrific drama and a great argument starter.

A family caught up in the takeover of Cambodia face deprivation, loss and uncertainty under the brutal rule of the Khmer Rouge regime. The violence is largely muted and occurs off-screen, yet this traditionally animated drama does a solid job showing the horrors endured by those enslaved for the good of “the party”. The innocence of the simple animation style serves as a powerful counterpoint to the gruelling nature of the story.

The downside of China’s nation-saving policy of allowing only one child per family is shown in unflinching, graphic detail, both through interviews with those who brutally enforced it and through images of discarded fetuses in garbage tips. With boys being favoured over girls, the brutality of Communism reached in and tore families apart, though some in rural areas dared to resist. The film will test your mettle, and the profile of one former official trying to atone for her acts might just break your heart.

ON THE PRESIDENT’S ORDERS (72 minutes; subtitled)

In trying to get the massive drug problem under control in the Phillipines president Dutertes decided that hardcore is the best way to go, giving his police force extraordinary powers – including license to kill – to quash users and pushers alike, who he feels neatly fall into the same category. On-the-spot coverage details the trigger-happy process of enforcement, which leaves little room for discretion or sympathy. Perps are arrested and crammed into cells to consider confessing or else face 20 years hard. A compelling doco, the film dares ask the thorny question: how much of what goes on is sheer abuse of authority and how much is necessary toughness to decisively stamp out a heinous societal cancer? Some of the moments captured are truly chilling.

Still standing as one of the great, tragic sagas of modern America, the increasingly byzantine story of the infamous 1972 Watergate Hotel break-in unspools at a measured, mesmerising pace over four and a half hours. Director Charles Ferguson (No End in Sight; Oscar-winner Inside Job) appears to have left no detail out, though his use of re-enactments seems unnecessary amidst the wealth of archival material so carefully assembled here. Those familiar with the Watergate cover-up and its fallout will still find the abuses of power breathtaking. Those young filmgoers coming to Watergate fresh might have a mixed reaction: yeah, it was bad, but how does it compare to the shenanigans that have gone on in the White House since Nixon’s resignation?