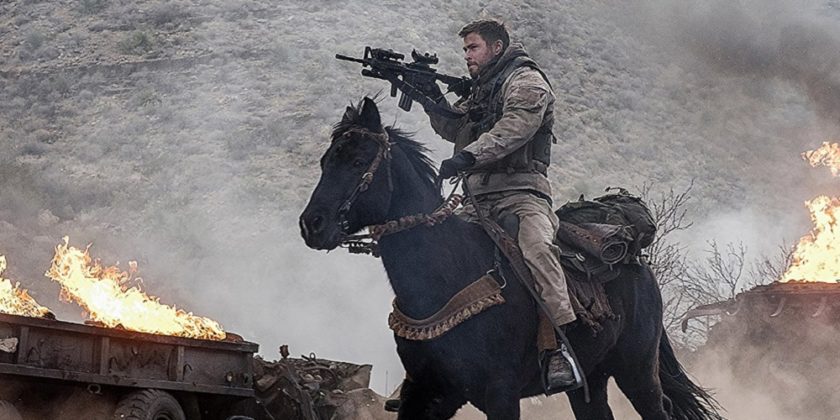 American cinema’s on-going tribute to its post-9/11 war heroes continues apace with uber-producer Jerry Bruckheimer’s big-scale, fact-based adventure that tells the remarkable story about the first men into Afghanistan after the towers fell.

It’s a fine, very well-made war movie with strong characters, plenty of well-staged, realistic action and loads of those tough, failure-is-not-an-option Americanisms that always feature in any movie where something has to get done, whatever the cost and whatever the odds.

Leading the near-sucidal charge into the badlands against the Taliban is Captain Mitch Nelson (Chris Hemsworth, minus his Thor get-up and sporting a convincing American lilt). He’s a devout patriot who insists on going into battle, partly because he shares the collective rage over the 9/11 attacks – which, in a well-judged moment designed to deliver maximum punch, he sees on TV with his daughter – and partly because he has only ever proved himself on the training ground, never in real combat.

Not all the men he leads have double-helpings of motivation, but they are all keen-as-beans to join the fight against Osama Bin Laden. Michael Shannon and Michael Pena provide terrific support as  squad members.

Mounted on horseback and tasked with assisting the Northern Alliance, which is riven with factionalism so deep they might turn on each other, their mission is to “light up” enemy placements with laser beams and so guide the lethal payloads delivered by obliging B-52 bombers flying unseen several thousand feet overhead.

In terms of realism the battles are brutal and the human cost is heavy, though the film does hold back from delivering the level of vividness set by Steven Spielberg’s 1998 classic Saving Private Ryan, which has become the benchmark for war-movie realism.

It’s important to note that directors are able to go to such extremes if so desired, and that not doing so is a decision driven largely by market-minded producers who want the film to get a rating that won’t cut it off from a wide audience.

Ably directed by first-timer Nicolai Fuglsig (from Denmark), the film follows the lead of such war films as American Sniper, Lone Survivor, Hurt Locker and Zero Dark Thirty  where the priority is the celebration of battlefield courage, not political analysis.

Though Afghanistan was better off after the American intervention, it was certainly no walk in the park. 12 Strong does fleetingly acknowledge this, but it does not offer a critique as it is not that sort of movie.

Whether it should have will depend on your politics, but it is clear the film’s primary purpose is to salute the soldiers, not lambast them for doing their duty so splendidly by pointing out what a mess Afghanistan became.

12 Strong also highlights, yet again, the huge, painful difference between American and Australian movie culture when it comes to celebrating heroes. Americans love it so much that a feature film will often come out within two years after an event.

Yet the holes in our cinema story-telling are too big to ignore, especially when it comes to our war stories. Is it cultural cringe? The tall poppy syndrome? Some weird fear of being proud? Australian cinema remains too reluctant about putting such an essential part of our national story on screen.

So it comes as great news that a movie about Long Tan is being made in Queensland. It will recount the famous 1966 Vietnam war battle where about 100 Australian soldiers and a handful of Kiwis fought off 2000 Viet Cong soldiers across one bloody afternoon.

Hopefully this is a sign of change. There’s so much to be proud of about our war history and our cinema should reflect that. Just as America’s does.

The heart-breaking true story of British amateur sailor Donald Crowhurst is told here in painstaking detail by director James Marsh (Man on Wire; The Theory of Everything) who has succeeded in bringing us the saddest film we’ve seen in yonks.

It’s more proof that nobody does noble failure like the Brits. Perhaps it’s the Dunkirk spirit, that invaluable quality where pluck never shirks in the face of adversity.

As history records, Crowhurst was a businessman who, in order to save his failing electronics company, decided to design and build his own boat and enter the 1968 Sunday Times Golden Globe Race. By circumnavigating the world in record time he would receive huge amounts of coverage and great publicity, as well as lucrative endorsement deals.

That was the dream, anyway. The slightly grimmer reality saw him secretly abandon the race while in the South Atlantic from where he would send regular radio transmissions to create the illusion he was actually sailing around the world.

As Crowhurst, the perfectly cast Colin Firth shows that he has now cornered the market in portraying British pride in all its hues; he slices deeply into the psyche of this deluded sailor.

Having set sail in a boat that was ill-prepared, Crowhurst forges on through the chop for as long as he can.

Driven less by the wind than by the heavy obligations he has made to all the people left behind – his wife (Rachel Weisz), his publicist (David Thewlis), his sponsor (Ken Stott), the townsfolk – Crowhurst confronts a mind-cracking dilemma: he can’t physically go on, yet he can’t afford not to complete the race.

So he decides to fake his progress over the radio, carefully monitoring the progress of the other racers and waiting for the most opportune moment to head back up the ocean.

For noble Englishmen like Crowhurst, however, a bad conscience makes for a bad bunkmate. While trying to maintain his ruse, we witness Crowhurst slowly go bananas. Firth does this so powerfully, the film comes across less as a portrait of a charlatan but of a decent man who didn’t want to let anybody down, least of all himself. It’s a stirring portrayal, the centrepiece to a fine period film.

As we finally close the book on this year’s Oscars a few points need to be made.

So, it’s panic stations time. Any TV “event” that loses almost half its audience in four years is unlikely to be on TV much longer.

What caused the dip?

Firstly, the Weistein saga. The hypocrisy of Hollywood liberals hit critical mass and the public just got sick of it. Those caught up in the scandal were all prominent liberals – Weinstein, James Franco, Kevin Spacey, Casey Affleck, etc – so hearing from yet more Hollywood liberals about values just didn’t go down well, Oscar or not.

Many speculate that the rise of streaming, of plentiful viewing alternatives, and of young people preferring to glean highlights Oscar packages offered online rather than sit through an old-fashioned, analogue-age TV show accounts for the rating dent.

That’s possible, but it could also be a bit of a furphy, as the all those things were going strong in 2014, when the ceremony won big.

The real reasons are also the most obvious:

* The show has become a bore. The telecast is just too long, this year running almost four hours;

* Using the podium as a platform to push political agendas and engage in left-wing, social justice warrior virtue signalling just ices the public out; (See point #1)

* So, too, does the prevalence among the nominees of smaller arthouse films; who cares about seeing the makers of film you haven’t heard of winning an Oscar?

It’s watershed time. The big point is that Oscar needs to get its clock fixed. It has to reconfigure itself to acknowledge that films that hit big can also be Oscar worthy.

It’s painfully ironic that while everybody in Hollywood is talking about inclusion, nobody is questioning why popular films aren’t actively included more.

Why isn’t there an Oscar for Best Comedy? Best Blockbuster? Best Stuntwork? Best Action? Best Newcomer? How about an Oscar for best film that made over $500 million? What, in principle, is wrong with that? Or how about Best Sequel? That’d impove their quality! – provided you only run the category when the quality warrants it.

And the amount of art and effort that goes into writing screenplays for franchise films, such as the Fast & Furious series, is long overdue for recognition. Die Hard 4.0 certainly deserved a special award for reviving a dead franchise 12 years on.

As for making it shorter, Oscar has to rethink its age-old format. Why labour through nominees, clips, winner, speech, walkoff? Skip the clips and announce the nominees and winners. Why does everyone get a live speech? Put some of the minor ones, like best documentary short online, given after the show. Do we have to hear every song?

There’s loads of flab they can cut. It just takes will power, a quality Hollywood has been notoriously short of this past year.

Anyway, we’re all exhausted. Here’s hoping they do better next year, with a shorter, punchier show designed to entertain, not lecture.

Call Me by Your Name

Heaven Is a Traffic Jam on the 405