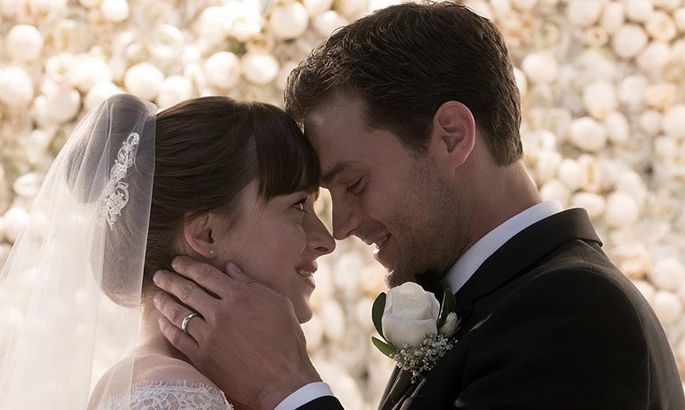 Our favourite movie couple-of-the-moment are back to deliver a fairly satisfying, if dramatically thin final chapter to the Fifty Shades trilogy, a film series that has effectively domesticated the sexual practice of bondage by putting a tea cosy on it and selling it as mainstream movie romance, with a bit of slap-and-tickle sauce on the side.

With the naughty-but-respectful Christian Grey (Jamie Dornan) and lip-biting temptress Anastasia Steele (Dakota Johnson) now happily married, they must now face down the challenge of seeing if they can actually stand each other.

As we all know, Christian is the freak who likes tying up his lady but, of course, he needs her permission to do so, a clever story device that takes the sadistic sting of real perversion out of his character.

As was clear from the first film, this need for consent means that it’s Anastasia who holds the real power in the relationship, something Christian bristles at, even when it comes to trivial things like keeping her old email address.

Director James Foley (Glengarry Glen Ross) – who took the Shades franchise over from Sam Taylor-Johnson and shot Darker and Freed back to back (a wise move that kept production costs low) – works hard to build tension while maintaining the nokie-quotient people have come to expect. But here he encounters a rather interesting dilemma.

In the first two film the scenes of kinky sex were crucial to the story as we were still learning about the characters and how the power dynamics worked.

Third time around, however, the sex scenes come across as rather perfunctory. Foley still spends a lot of time on them, his camera drifting over their bodies in pseudo-erotic close-up as Christian and Ana horse around in their well-upholstered play room, but the sex really doesn’t serve much purpose. After all, we know what they get up to now. The novelty and spice isn’t there any more so there’s no real point in seeing them in congress.

Indeed, one wonders how long it would take before boredom set in on their S&M sessions and Christian turned their play room into a home theatre.

As with the previous two films, the concluding part of the Fifty Shades trilogy is timed perfectly for Valentine’s Day, the message being that having some fetish naughtiness in your love life has gone from being a dark secret to being as mainstream as a supermarket aisle, which is where the blandly-written, incredibly popular novels of E.L James appeared for sale alongside discount chocolate bars and washing powder.

And in case you thought the saga was over, fans know full well that E. L James (real name Erika Mitchell) has written another series of books telling the Shades saga from Christian’s point of view. The first of these Grey: Fifty Shades of Grey as Told by Christian has already been a hit, so don’t be surprised if there is still more to come.

With topicality now a big pull at the box office, filmmakers today process news events into multiplex movies with ever increasing speed.

It was thus inevitable that the day would soon come when a director would skip using professional actors and simply cast the actual people involved in the recreastion of an event (something that TV has been doing for decades, by the way.)

That’s the main draw of The 15:17 to Paris, in which Clint Eastwood (Sully; American Sniper) recreates a stunning act of anti-terrorist bravery aboard a train by having the three real participants – Spencer Stone, Anthony Sadler and Alek Skarlatos – play themselves.

In 2015 the three childhood friends, all now in the military, were travelling on a train from Amsterdam to Paris when a lone terrorist armed with an assault rifle and almost 300 rounds of ammunition attempted to wreck havoc. But Stone, Sadler and Skarlatos got to him first. In a brief, bloody encounter they over-powered him and saved the life of a man the terrorist had injured.

The incident takes only a few climactic minutes of the film so Eastwood, working from a screenplay by Dorothy Blyskal based on the book by Jeffrey E. Stern, dives deep into their backstory. This covers their formative time as school tearaways constantly being sent to the principal’s office, their consequent bonding, military training and reunion while on leave in Europe.

Stone’s tale is easily the most engaging and quickly emerges as the main character. He’s a big lad, put upon for his size and in need of purpose in life, which the military provides but at a very high cost. During his training Stone has to learn one of life’s toughest lessons, that sometimes passion does not match ability and you have to settle for something less.

The three leads acquit themselves well, even though the scenes where they presciently discuss how Fate is calling them to some higher purpose strain plausibility.

The child acting though, is pretty terrible. It’s a peculiarly American syndrome where child actors are directed to behave like miniature adults. Clint should have spent a bit more time coaxing more kid-like performances from them.

Given how brief the film is, Eastwood seems conflicted about how to best tell the story. We begin on the day of the event before suddenly flashing back a decade to see two of the mothers (Judy Greer and The Office’s Jenna Fischer) face the school principal (Thomas Lennon from The Odd Couple and Reno 911) about their kids’ bad behaviour.

The film then adopts a linear, chronological telling, though Eastwood still insists on throwing in a few flash forwards to the attack as though to remind us where the story is heading.

As efficient a filmmaker as he is – he still manages about a film a year, like Woody Allen – one wonders whether Eastwood might have enjoyed one more session at the editing console to smooth out the film’s narrative bumps.

Whatever the film’s shortcomings, one thing you can’t fault Eastwood for is his unassailable commitment to celebrating American heroism.

The 15:17 to Paris has not been received with the acclaim that greeted American Sniper or Sully, but you have to take pause and consider: as one of the legends of American cinema do you really think Clint Eastwood sweats over what critics think?

He made it clear with American Sniper that, regardless of Hollywood politics, he is an artist devoted to telling that part of America’s national story that speaks to old-school values that might make liberals cringe but that make his legions of fans swell with pride.

Director Jacqueline Joseph appears to have caught each of her subjects at their most relaxed and reflective, engaging them in long discussions about their victories, what it took to get them there, and what life is like post-peak.

Perhaps the most inspiring moments come from hurdler Ed Moses who found greatness on the field by rethinking the basics of his sport and redesigning the maths involved, including the number of steps between each hurdle.

Most delightful is Romanian gymnast Nadia Comaneci, whose perfect scores at the 1976 Montreal Olympics confounded a scoreboard only designed to accept a top score of 9.99. Reflecting a common theme in the film, she explains how physical ability must be matched with a psychological discipline that, in her case, made the four-inch wide balancing beam her domain.

The film is full of inspirational bon mots, most of which would have been easy to dismiss had they not come out of such legendary mouths. Also, we are so used to hearing such wisdom spouted in association with product endorsements, yet here there is none. The motive behind all the advice and insight seems to be nothing more than a pure desire by each participant to tell their story – the film is replete with great archival footage – and share what they have learnt.

Although the focus is sport, the film does speak more broadly to principles of success and the values of persistence, vision, displine and good old-fashioned grit.

Winning is showing at the Nova.