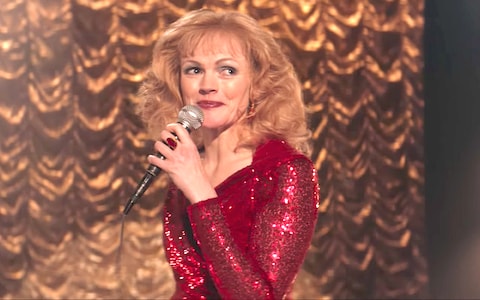 The common notion that comedians often take to the stage as a reaction to their own troubled lives gets a good working over here, though this is more a period drama about an abused woman demanding respect and independence than an out-and-out comedy.

Maxine Peake (Shameless) puts in a spirited performance as the defiant titular character, doing it hard as a 1960s working-class wife to a brute (Tony Pitts), who resents her attempts to become free of him.

With her ability to joke having been borne from her rough childhood, she explores the unforgiving realm of working men’s clubs, where comedians would often follow strippers and women were not expected to tell jokes.

Director Adrian Shergold (Pierrepoint: The Last Hangman) frames her struggles against domestic violence and stage nerves with a dank atmosphere and a pervasive sense of self-doubt, something only her need to connect with real people can overcome.

Paddy Considine puts in terrific support as the sweet-natured librarian who falls for her, despite class being such a huge issue back then.

For reviews of MISSION IMPOSSIBLE: FALLOUT, THE WIFE and WHITNEY please CLICK HERE:

Great news: the cutlural jewel of the Melbourne winter has arrived, so to get going here are some early picks from this year’s bountiful Melbourne International Film Festival program. There are plenty more to come!

The largely charmed life of Australian motorcycle racing legend Wayne Gardner gets a detailed, chronological treatment in this valentine by Jeremy Sims (Last Cab to Darwin). With Gardner and all the main players in his life front and centre, the film presents him as a working-class hero recognised overseas for his talent before being embraced at home. The film deftly touches on Australia’s cultural cringe as Gardner admits how his class made him feel unworthy of the accolades he had earned. The film is replete with archival footage and some nifty anime-style animation, a nod to the huge part Japan played in his life.

With his ability to portray tightly wound characters on full show, Ben Foster (The Messenger; Hell or High Water) plays a traumatised war veteran who forces his young daughter (Kiwi Thomasin McKenzie) to live with him in the verdant depths of a national park, where they hide from the authorities. Director Debra Granik (Winter’s Bone) keeps things quiet as she explores how the effects of brainwashing can wilt in the presence of running water and a bathroom.

With an eye for detail as exacting as his subject’s, actor/director Thomas M Wright (Balibo; Top of the Lake) presents a jagged profile of artist Adam Cullen (splendidly portrayed by Daniel Henshall from Snowtown) as he follows the attempt by young reporter Erik Jensen (Toby Wallace) to capture his hand-grenade personality in a biography. Based on the book by Jensen, the film is full of rich imagery and insight, Wright’s subtle direction examining the truths that lurk beneath the artist’s skin. This is an arthouse film about an artist, superbly done with top-notch performances and evocative cinematography that bravely uses the old 4:3 ratio to great effect.